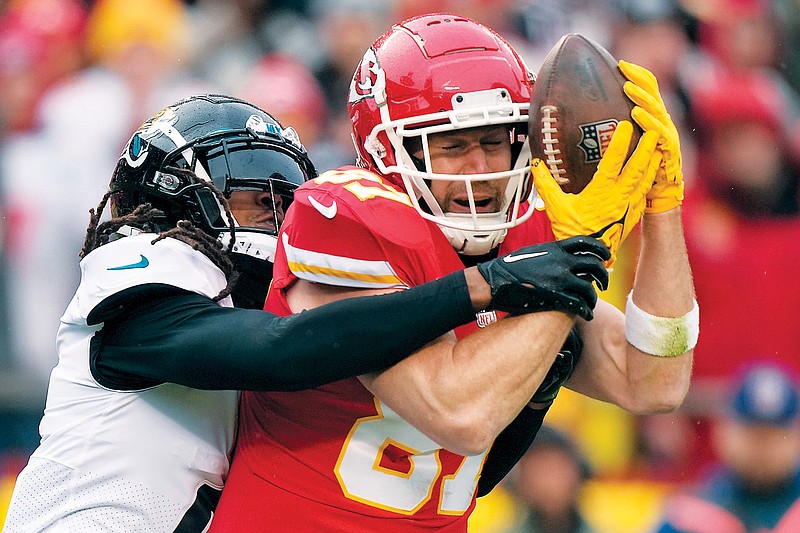 He argued with trainers, assistant coaches and anyone else within earshot on the Kansas City sideline to let him play through an injured right ankle.

“I’m not coming out of a playoff game,” Mahomes would say later, “unless they take me out.”

Well, the Chiefs did, forcing him to get X-rays late in the first half of their divisional game against Jacksonville.

But when they came back negative, and Mahomes proved he could protect himself in the halftime locker room, Reid decided to let his All-Pro quarterback back on the field -- and he gamely led them to victory.

Mahomes finished with 195 yards passing and two touchdowns, the second capping a 75-yard drive late in the fourth quarter, and lifted Kansas City to a 27-20 victory against the Jaguars and a spot in a fifth straight AFC Championship Game.

Mahomes also vowed to be ready next Sunday against the winner of today’s game between Cincinnati and Buffalo. If the Bengals win, they will be back at Arrowhead Stadium; if the Bills win, they’re headed to Atlanta.

Chad Henne led a 98-yard touchdown drive while Mahomes was out. Travis Kelce had a career-high 14 catches for 98 yards and two scores. Marquez Valdes-Scantling hauled in the eventual clinching TD pass with about 7 minutes left in the game.

“It’s a credit to the team I have around me, the coaches around me and the organization in general,” Mahomes said. “We try to do whatever we can to be in this position, to get to the AFC Championship Game and find a way to the Super Bowl.”

The Jaguars, who rallied from a 27-0 deficit to beat the Chargers in the wild-card round, squandered two chances to mount another late rally. The first ended when Jamal Agnew had the ball pop loose inside the Chiefs 5 with about 5 minutes to go, and the second when Jaylen Watson made a leaping, one-handed interception near midfield.

The Jaguars’ last-gasp chance ended when Kansas City recovered an onside kick with 24 seconds to go.

Trevor Lawrence finished with 217 yards passing with a touchdown toss to Christian Kirk, who was briefly hurt midway through the fourth quarter but returned to finish the game. Travis Etienne added 62 yards rushing and a touchdown.

“When you get this far you don’t want to only go this far,” the Jaguars’ Foyesade Oluokun said. “You want to keep going.”

“I don’t really have the words right now,” Lawrence added. “The Chiefs did more today than we did.”

Long before Mahomes hobbled to the sideline in pain, he was at his creative best, driving the Chiefs downfield on their opening possession.

There was a shortstop-style sidearm sling to JuJu Smith-Schuster, a key third down pass to Kelce as he was being dragged to the turf, and the flip pass to his tight end that gave Kansas City a 7-0 lead.

The Jaguars came right back, taking advantage of a big kickoff return and a short field.

Then, the complexion of the game changed.

Mahomes was moving up in the pocket when Arden Key brought the full weight of his body down on the quarterback’s ankle. Mahomes hobbled to the huddle and managed to get through three more plays to end the first quarter, then was on the field two more plays before Harrison Butker kicked a 50-yard field goal.

During the Jaguars’ ensuing possession, Mahomes got into a heated argument with Reid and the training staff. He then threw down his coat and headed to the locker room, forcing Henne to take over midway through the second quarter, just as the 37-year-old journeyman did two years ago in a playoff win against Cleveland.

“Yeah, I did not want to go, and they kind of gave me the ultimatum that I wasn’t going back in unless I went in there,” said Mahomes, who cheered on Henne’s 98-yard drive from the sideline, wearing a puffy winter coat on a cold, sleeting night.

As the second half began, though, that familiar red No. 15 jersey was trotting back onto the field.

“It was a short leash,” Reid acknowledged. “If I felt like he wasn’t able to handle it, he would have been out.”

His right ankle heavily taped, Mahomes struggled to move around, but simply his presence seemed to calm the Chiefs -- and their angst-filled fan base. Butker added a second 50-yard field goal late in the third quarter to extend the lead to 20-10, and when the AFC South champs answered with a touchdown of their own, so did the Chiefs.

Mahomes drove them downfield for one last score that proved to be the margin of victory.

“We know that if it’s up to Pat, he’s going to be in there. I’m sure he had some words with everyone on the sideline that he wanted to be in there as fast as possible,” Kelce said afterward.

“It’s just a different feeling when one-five is in there. He can make anything happen, even on one ankle.”

Notes: Mahomes improved to 5-0 in the divisional round of the playoffs. He’s thrown 28 touchdown passes and three interceptions in 10 home playoff games. … Henne was 5-of-7 for 23 yards and a score. … Jacksonville had eight wins as an underdog this season, tied for the most in the Super Bowl era.