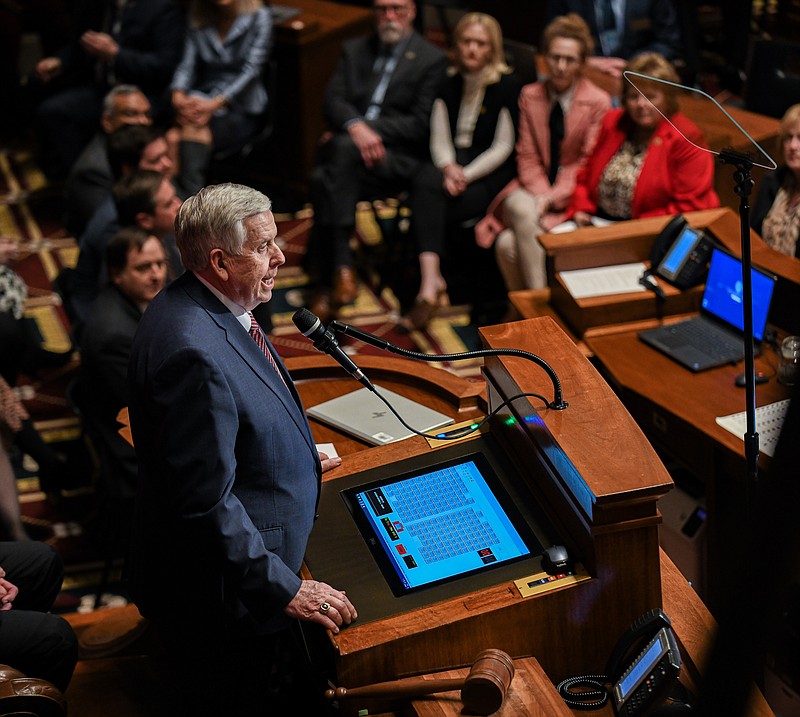 Julie Smith/News Tribune photo: Missouri Gov. Mike Parson is shown at the speaker's podium Jan. 18, 2023, as he delivers the annual State of the State speech in the House of Representatives Chamber. The speech was paused numerous times as members of the joint session of legislators stood to applaud.

Missouri Gov. Mike Parson unveiled a $50 billion budget during the State of the State address Wednesday.

The plan to make historic investments in Missouri's infrastructure, schools, health and social services has been lauded by Democrats and Republicans alike in both of the state's legislative chambers.

Some members of the Grand Old Party are questioning if it's conservative enough. Others are totally on board.

The final result will be decided during the next four months of the legislative session as lawmakers work through their state budget and policy priorities.

"The biggest concern I have with the speech is the amount of money we are spending," said Sen. Travis Fitzwater, R-Holts Summit. "At some point, we won't have record revenues, and we need to prepare for that future. Expanding or (creating) new government programs are typically a problem insofar as very few of these programs ever go away. And although the governor gave us budget recommendations that keep Missouri coffers full into the billions, we must be diligent to remain fiscally conservative."

"While I still support returning tax dollars to the Missouri taxpayers, I think we have a unique opportunity to improve some of Missouri's most important infrastructures," Haley said. "If the state of Missouri can begin this widening and rebuilding of I-70, it is likely federal grant dollars will be available to continue this project."

The address was a positive message for Missouri, according to Rep. Rudy Veit, R-Wardsville.

"I-70, we're no longer kicking that can down the road," Veit said. "This budget is designed to tackle tough problems. A lot of his proposals will have bipartisan support."

"When I was elected in 2018, Missouri was at the very bottom in state employee compensation," Griffith said. "I think since then we have moved up one slot, and that is still unacceptable."

"And the truth is we are losing state employees to the private sector because we cannot compete with their salary structure," Griffith said. "I am in hopes that we will take this up soon and get it to the governor's desk by March 1."

Sen. Mike Bernskoetter, R-Jefferson City, said he shares all of the priorities Parson outlined in his speech, including a $151.2 million pay raise for state workers and at least $4.3 million to address maternal mortality rates: "I just hope we'll have enough in the budget to cover it all."

The figures being discussed for the proposed budget "sound imposing," said Rep. Jim Schulte, R-New Bloomfield. He said he's only been in the Legislature for the past two weeks, though, and remains "a long way from being an expert on the priorities" the governor outlined.

"The governor asked us to focus on infrastructure, education, workforce development, higher education, government reform, health and mental health care and public safety. Finding balance to these areas while maintaining a balanced budget will be our job," Schulte said. "Something that stood out to me during the governor's presentation was the number of legislators who stood and applauded on both sides of the aisle. I do not recall a time in recent history that this has happened. I find this encouraging and choose to take an optimistic view of future meetings."

The Republican governor's plan would leave roughly $4 billion in the bank, according to state Budget Director Dan Haug. The estimate is based on a projected slowing of state revenue in the near future, a result of several factors from last year's state income tax cut to recent actions by the Federal Reserve.

John Rizzo, an Independence Democrat and the Senate minority floor leader, said the Republican governor offered a "good" and "decent" budget. He said the most difficult part will be getting it past a Legislature dominated by conservatives.

"Current Republican ideas are 10-year-old Democrat ideas," he said. "It seems like they eventually get to where we're at, it just takes a decade to get there."

Rizzo pointed to the governor's call to address Missouri's standing as the state with the sixth highest maternal mortality rate in the country, an issue he recalled talking about during his time in the House from 2010-16. Legislation sponsored by Senate Democrats and Republicans received an initial hearing last week.

He said he hopes the same quick progress will be made on raising salaries for state employees and teachers, expanding child care and investing in infrastructure and higher education.

"We clearly didn't see the push for culture wars last night," Rizzo told reporters Thursday. "So it seems like -- at least from the executive's office and the governor's office -- that the grandstanding on culture wars is over. Real work with real results for real people."

Rizzo said the proposed budget could have provided more for teacher pay raises and other areas.

Senate President Pro Tem Caleb Rowden, R-Columbia, leader of the Senate Republicans, said Parson's speech largely addressed issues he would expect both parties to get behind.

"It was a consensus-building speech," Rowden continued, "which I think in today's view of politics -- I'm not sure that's a bad thing."

Rowden said he didn't have any immediate objections to the governor's suggested budget, but said there are a number of items lawmakers should pick apart to understand better.

"We're going to take a good hard look at what the governor's proposing," he said. "I'm interested in how he's doing what he's doing with the child care front. We know we have to do something there, but we want to be sensible about that and not just grow government at an alarming rate."

Parson's investment in education is going to pay off for the state, Haley said.

"Although beginning teacher salaries have increased recently, we must do more to attract and retain talented and dedicated educators," Haley said. "We must make sure all teachers see significant salary increases so that compression of the salary schedules does not occur."

It's not a magic bullet, but it gives those homes reason to celebrate, Griffith said.

Many lawmakers on both sides of the aisle said investments in Interstate 70 are music to their ears.

In a statement after Parson's speech, Republican leaders in the state House said they were committed to working with the governor on "common-sense, fiscally responsible solutions" to the issues he outlined in the State of the State address, such as expansion of Interstate 70 near St. Louis, Kansas City and Columbia.

The $859 million transportation project was the premier piece of the governor's speech. It would expand roughly 50 miles of the highway to six lanes (three each way) and is only a piece of a $2.7 billion project to do the entire highway.

Bernskoetter said he supports the investment, adding there are many roads throughout the state that need attention. Parson's budget proposal includes additional funding for the Missouri Department of Transportation's Statewide Transportation Improvement Program, a list of road and bridge projects identified by local communities and prioritized by the department.

He would also like to see a focus on providing basic roadside services statewide and making sure snow is plowed quickly. Bernskoetter said he would have liked to see the governor's annual address include funding to make interior repairs to the Capitol Building but added, "that is much less urgent than education, infrastructure and public safety."

The governor's desire to invest in state employee salary raises, workforce development and infrastructure pleased Fitzwater. He said the state needs to have a simultaneous focus on training the next generation of workers and creating a foundation for future investments in roads, bridges, waterways and agricultural systems.

Fitzwater said it's well past time the state makes a significant investment to improve Interstate 70, and he's thrilled it's being funded with the state's budget surplus.

"One-time projects like the expansion of I-70 are ideal for those dollars," he said. "They will bring in billions more in investment and development, while also ensuring that we are conservatively utilizing the money where it is most needed without over-burdening future Legislatures with ongoing government programs."

Parson's proposal to expand Interstate 70 in suburban areas is "very doable" because of the budget surplus, Haley said.

"I believe most people would agree the widening of our interstates will be necessary in our near future as the volume of traffic keeps increasing," he continued.

Fitzwater, a freshman state senator, said he would have liked Parson to lay out tax reforms in his speech.

During a special session last fall, legislators passed an $800 million income tax cut that reduced the top rate from 5.3 percent to 4.8 percent. Additional cuts are in place when the state hits specified revenue thresholds.

Leaders in the House have called for further cuts and said they're open to looking at a range of ideas, including income taxes, sales taxes and personal property taxes.

"There is more room to return money to Missouri taxpayers," House Speaker Dean Plocher, R-St. Louis, said at the start of the session.

"Missourians pay more taxes than ever even though we've cut their taxes several times throughout my years in Jefferson City," he said. "We need to provide individuals and couples, especially those on fixed incomes, personal property tax relief and reduce the burden we continue to place on Missourians across government entities."

Fitzwater said he was most interested in the governor's comments on protecting children and taking care of the needs of parents.

"I'm fully on board with whatever it takes to protect kids, fighting for their educational needs, closing gaps for parents on child care across our state, and helping mothers and fathers through the earliest stages of child rearing," he said.

Parson has touched on some of the issues in his budget before, Veit said.

"I don't know what his opinion is going to be on taxes," he added. "But his No. 1 priority is getting the state back on track. You don't take on these challenges without spending some money."