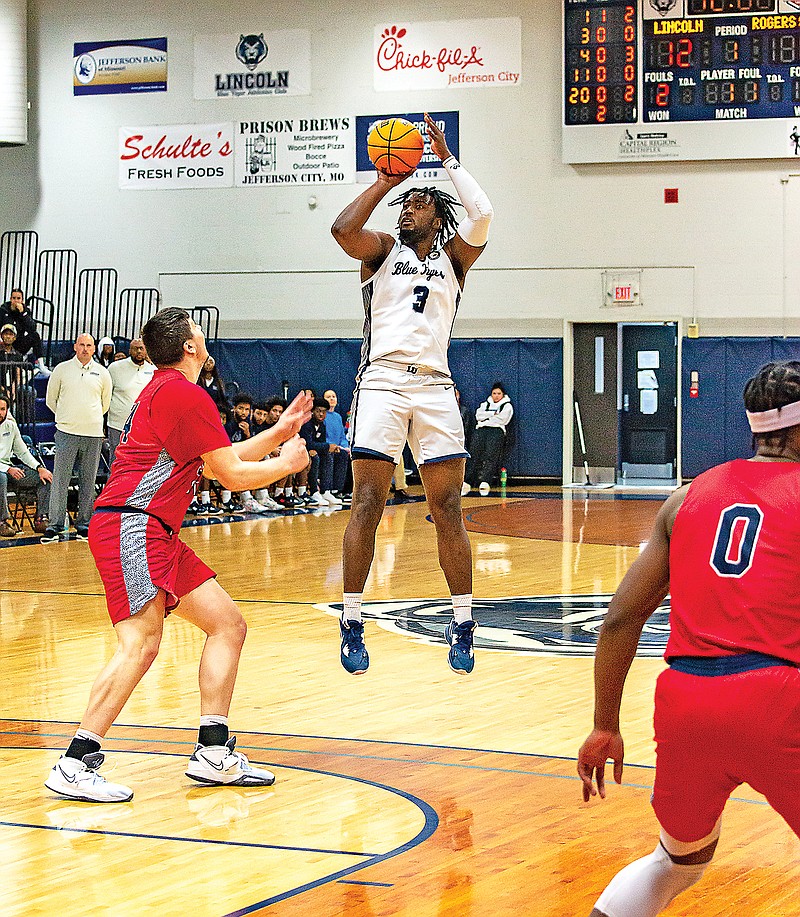 Sai Witt of Lincoln shoots a 3-pointer during a game earlier this season against Rogers State at Jason Gym. (Ken Barnes/News Tribune)

Coming in on a four-game win streak, the Lincoln Blue Tiger men’s basketball team will be tasked with possibly its biggest test of the season when it visits the defending national champion and ninth-ranked Northwest Missouri Bearcats today.

Game time is scheduled for 3:30 p.m. in MIAA play in Maryville.

Northwest Missouri (16-2, 9-2 MIAA) has won its last two games — including a 73-52 victory Thursday against Central Missouri — and sits in sole possession of second place in the conference.

Lincoln (11-4, 7-4) is coming off a 70-56 win on the road Thursday against Missouri Western and currently holds possession of fifth place in the MIAA.

The Bearcats are tied for the highest-scoring offense in the conference at 78.3 points per game and give up a third-best mark of 60.4 points per contest on defense, while the Blue Tigers are seventh in offense (72.7) and fourth in defense (62.5).

Artese Stapleton (6-2 senior guard) leads Lincoln in scoring at 18.6 points per game, Sai Witt (6-8 senior forward) is next with 15.5 and Kevin Kone (6-9 senior forward) averages a double-double of 13.5 points and 12.5 rebounds — the second-highest mark in Division II behind Shippenburg’s Dom Sleva’s 12.6.

Lincoln’s women’s basketball team will be looking to get back on track today when they visit the Northwest Missouri Bearcats for a 1 p.m. start in MIAA action.

Northwest Missouri (9-8, 4-7 MIAA) is coming off a near upset of fifth-ranked and undefeated Central Missouri in Thursday’s 68-67 defeat but had won the previous two games.

Molly Hartnett, a 5-foot-9 sophomore guard, is the lone Bearcat to average in double figures with 12.8 points per game.

Le’Yanna McGinnis (6-1 junior forward) leads the Blue Tigers with a 13.5 scoring average as the lone player to average double figures for Lincoln.