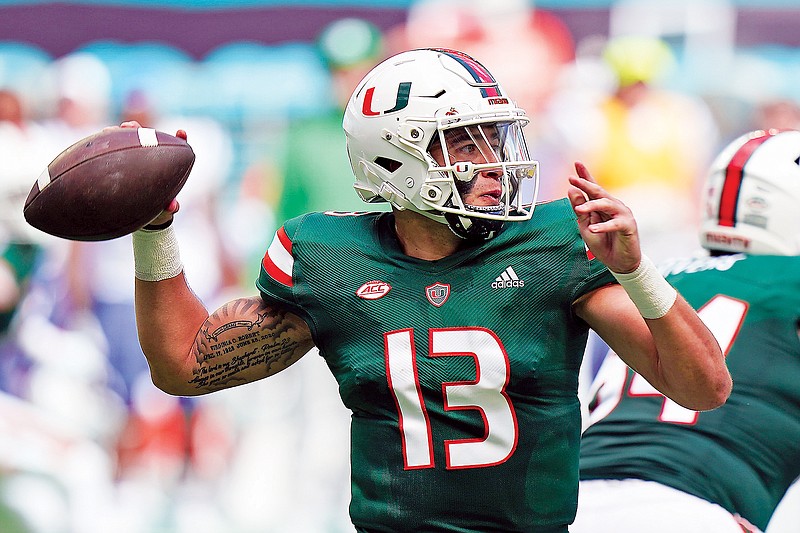 In this Oct. 22, 2022, file photo, Jake Garcia throws a pass for Miami (Fla.) during a game against Duke in Miami Gardens, Fla. (Associated Press)

The Missouri Tigers have added a quarterback through the transfer portal.

On Friday, Jake Garcia announced on Twitter he was committing to play for the Tigers after spending two years at the University of Miami (Fla.).

Garcia was among the top quarterback recruits in the 2021 class -- receiving offers from schools such as Alabama, Florida, Ohio State, Texas and USC. He originally committed to USC before opting to go to Miami.

He completed 59.1 percent of his passes, throwing for more than 800 yards to go along with five touchdowns with four interceptions.

Brady Cook started at quarterback for Missouri last fall. He threw for 2,739 yards with 14 touchdowns and seven interceptions. He also ran for just less than 600 yards and six touchdowns.

Cook underwent surgery on his throwing shoulder after the season and will miss spring practice.

Sam Horn, a highly recruited freshman who will play for the Missouri baseball team this spring, also returns at quarterback for the Tigers.

Garcia is expected to enroll at Missouri soon and participate in spring practice. He will have three years of eligibility.

Missouri got another quarterback earlier in the week when Dylan Laible, a product of Hutchinson Community College, committed as a preferred walk-on.