Chiefs get back to work for game against Jaguars 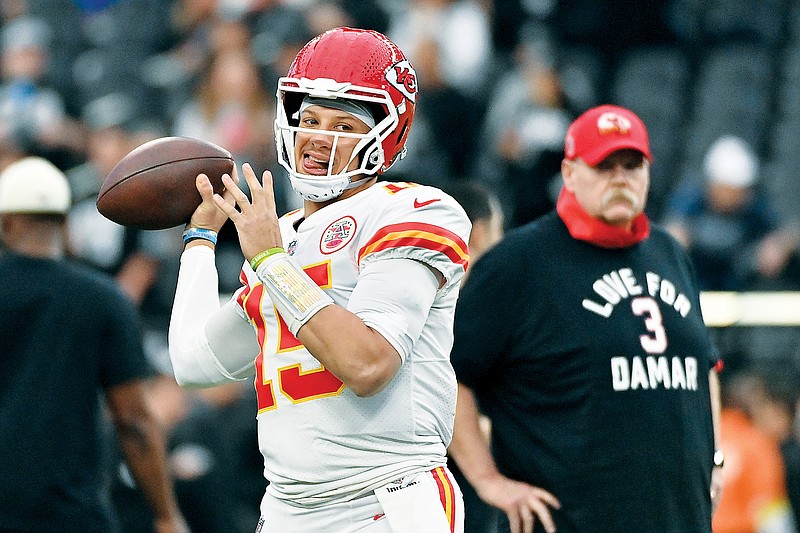 Chiefs quarterback Patrick Mahomes warms up prior to the regular-season finale earlier this month against the Raiders in Las Vegas. (Associated Press)

KANSAS CITY -- The Kansas City Chiefs spent more than five months battering their bodies in an attempt to not only make the playoffs but also ensure that they would get the AFC’s top seed and the first weekend to rest and recover.

The reward comes now: They’re about as healthy as possible as the Jaguars prepare to visit in Saturday’s divisional round.

The only Chiefs player that didn’t practice Tuesday was wide receiver Mecole Hardman, who spent time on injured reserve because of an abdominal issue but was activated for the final week of the regular season.

Otherwise, everyone was on the field -- including defensive end Frank Clark, who was banged up two weeks ago -- as the Chiefs got back to work.

“We took a week off and it felt like forever,” Chiefs linebacker Nick Bolton said. “I’m ready to get back out there.”

The Chiefs even got a surprise Tuesday when running back Clyde Edwards-Helaire, who has been on injured reserve with a high ankle sprain, and tight end Jody Fortson, who has been on the list with an elbow issue, joined them on the practice field.

Neither is expected to play against Jacksonville, but it increases the chances they will be available later in the playoffs should Kansas City win. Edwards-Helaire started the first six games and was a key part of the offense when the 2020 first-round pick got hurt Nov. 20, and Fortson had been a red zone option before getting hurt Dec. 18.

“Any time you get talented players back it helps the whole team. Not just the offense but everybody,” said Chiefs quarterback Patrick Mahomes, who acknowledged the week off did wonders for his own bruised body.

“Both of those guys are special players,” Mahomes said. “Having as many healthy guys as possible is great for us.”

It’s not as if the Chiefs, who lead the league in total offense and scoring, have suffered in their absence.

Seventh-round pick Isiah Pacheco averaged more than 5 yards per carry while rushing for 633 yards and four touchdowns during the last nine weeks of the regular season, and Jerick McKinnon has caught at least one touchdown pass in six straight games while reaching the end zone nine times total over that span.

In the weeks since Fortson went down, the Chiefs returned Blake Bell from injured reserve. And along with Noah Gray, the duo has played well alongside Travis Kelce while also giving the All-Pro tight end a break when he needs it.

“I don’t know much about the situation,” McKinnon said, “but getting all the weapons back is going to be amazing.”

Well, almost all the playmakers.

The Chiefs thought they’d have Hardman back weeks ago. But after returning to practice in mid-December, the speedy wide receiver has experienced a series of setbacks that kept him off the field for the rest of the regular season -- he has not played since Nov. 6 against Tennessee -- and now threatens to keep him out against the Jaguars.

Asked whether he expects Hardman to play in the postseason, Chiefs coach Andy Reid replied: “He does and we do, yeah.”

“You just want to try to not take steps back,” Reid said. “And it’s not that we’ve taken steps back, it’s just not getting to where it needs to be where he can go. The feeling is if we just back off on it, let it rest here, do his rehab, and he’ll have a chance to get better. We don’t want to put him out there in a bad situation where he can’t play.”

The rest of the Chiefs wide receivers have picked up the slack.

JuJu Smith-Schuster finished just 67 yards shy of his second career 1,000-yard season. Marquez Valdes-Scantling has given them a downfield option.

And perhaps most importantly, Kadarius Toney has returned from a hamstring injury to give them a player capable of filling Hardman’s role on jet sweeps while also making plays in the passing game.

“I think you build up for this all season long,” Mahomes said. “The regular season you take week by week, but you want to be in the playoffs, and you know you’re going to play the best teams, and that’s what you want as a competitor.”

Notes: McKinnon learned last week he was the AFC offensive player of the month for December and January after landing from a flight. “I had a whole bunch of text messages. That’s kind of how I found out,” he said. “It’s great, but like I’ve said before, I couldn’t do it without my teammates, coaches, support staff and all of that.” … After hearing Jaguars QB Trevor Lawrence celebrated his first playoff win at a Waffle House, Mahomes recalled his own first. “I’m sure there were a couple of Coors Lights,” he said. “I didn’t get Waffle House. That’s a baller move, man.”