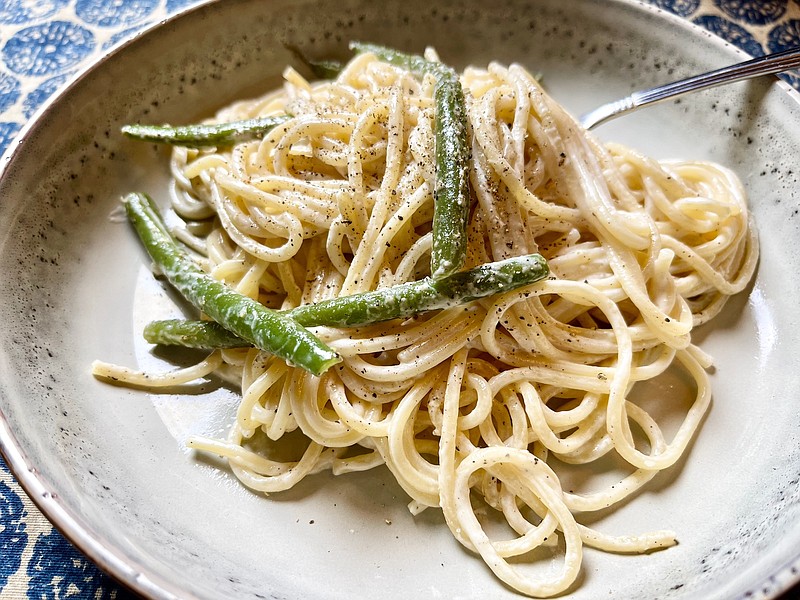 If eating less cream, less cheese or less pasta is part of your new year plan, my apologies. This recipe stars all three in rather significant quantities. But if you have some heavy cream and a block of Parmigiano-Reggiano in the fridge begging to be turned into dinner, look no further.

It's important to use real Parmigiano-Reggiano that you grate yourself in this recipe. None of that stuff in the green canister or even the pre-shredded tubs loaded with cellulose powder. They won't melt right or taste right. Also, you'll need the rind from your freshly grated block, so there's that.

Simmering the cream with the parmesan rind deepens the savory, umami flavor. Bay leaves and lemon juice keep this sauce from tasting like Alfredo, and that's a good thing. The lemon juice adds brightness while those bay leaves add an herbal layer. The result is a deceptively simple, yet rich and velvety sauced pasta.

The original recipe suggested adding some defrosted frozen peas, which my husband doesn't care for so I added green beans instead.

Bring a large pot of water to a boil.

Meanwhile, finely grate the cheese (I like to use a Microplane for superfine, quick-melting shreds), reserving the rind. Set the grated cheese aside.

In a medium saucepan over medium, combine the cream, the cheese rind and bay leaves. Bring to a simmer and cook, stirring occasionally and adjusting the heat as needed, until slightly thickened and somewhat reduced, 10 to 15 minutes.

Remove the pan from the heat, then remove and discard the cheese rind and bay leaves. Whisk in the lemon juice; the mixture will thicken slightly. Whisk in the cheese a handful at a time, then continue to whisk until completely smooth. Taste and season with pepper, then set aside uncovered.

By now, the water should be boiling. Add the salt and then the pasta. Cook pasta to al dente according to package directions. If desired, add a handful or two of peas (thawed) or green beans during the last few minutes of cooking. Reserve ½ cup of the cooking water, then drain the pasta (and peas or beans). Return the pasta to the pot.

Pour the sauce over the pasta and toss until well coated, adding cooking water as needed to thin. Taste and season with salt and pepper. Serve sprinkled with additional black pepper.

Note: We had a lot left over, but all that cream and parmesan doesn't reheat smoothly so eating it on repeat wasn't the best option. Instead, I turned the leftovers into spaghetti pie by mixing in a generous handful of shredded mozzarella cheese, a big spoonful of ricotta cheese, a little browned ground beef and two well-beaten eggs. I seasoned the mixture with dried basil, oregano, garlic powder, red pepper flakes and a little more salt and pepper and pressed it into a deep-dish pie plate, topped it with more mozzarella and then baked it at 350 degrees for about 30 minutes.