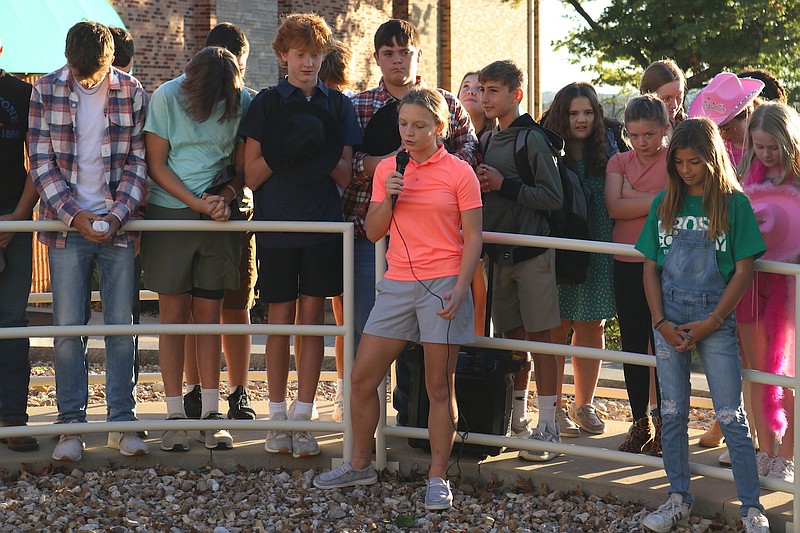 Students from all across Jefferson City and the nation gathered together around a flagpole Wednesday to pray.

Students at each school are in charge of determining what their event will look like -- some have worship music and some have morning snacks like doughnuts, but all have prayer.

Caitlyn Thompson, a student at Lighthouse Preparatory Academy, said a lot goes into the planning of SYATP. For her, it involved coordinating with a group of moms who agreed to bring homemade muffins and obtain donated coffee from Three Story Coffee. Thompson also asked students who played instruments to help lead a worship song, and she looked for students who would be willing to lead prayers on various topics.

Because the event functions much like a religious student club and doesn't interrupt instruction because it's before school, students at public schools can participate too.

SYATP had been happening at the high-school level, but two years ago, she took it upon herself to bring the event to younger students as well.

"I kind of just started it because the high school was doing it, and I said, 'Hey, when I get to middle school, why don't we do it too? There's no reason we can't,'" Holtmeyer said.

Classmate Macie Kempker added the timing was important too, because a student had a family member with health issues who would be undergoing a surgery on the day of SYATP. So when the fifth-graders gathered for their first SYATP, they prayed for their classmate and their family.

At Calvary Lutheran High School, students were involved in all the planning. Students volunteered to write prayers on different topics. Senior Micah Spurling had the idea to hold a smaller worship and prayer gathering earlier in the week.

Elizabeth Lieb, a senior, said it didn't matter if people said the perfect words in their prayers because God would understand people's hearts.

At River Oak Christian Academy, Administrator Lisa Smith plans SYATP, but each class of students takes an active role in the event, either by leading a pledge or leading a prayer.

Sophia Davidson, a sixth-grader, and Maggie Wessing, a seventh-grader, have been attending since they were 4. COVID-19 made past SYATP events a little different -- students would head outside in groups to pray -- but this year, all the students got to be together.

Many of the students found it significant the event was held around the flagpole.

Wessing said it pointed to America's origins in "faith and freedom of religion."

Davidson said it made her proud to know people all over the country were participating in the day.

"I feel like it's a really powerful experience for children to get together and pray over their school and the country and military forces," Davidson said.

"I think there's power when believers get together and they unify themselves with one heart, one mind and they pray together," Calvary Lutheran High School senior Micah Spurling said. "It also gets them expectant and intentional about what God might do, and it's doing it together."

Each student shared a different reason they thought it was important to pray.

Thompson said it was especially important to pray now as the world is still reeling from the effects of the COVID-19 pandemic.

"It's helpful to know that someone's always there for you, to watch out and protect you," Blair Oaks seventh-grader Ainsley Stegeman said. "He's always going to be there for you no matter what happens or whatever you do."

"I want people to understand that even if they feel alone, there's always going to be someone that's there for you," Kempker said. 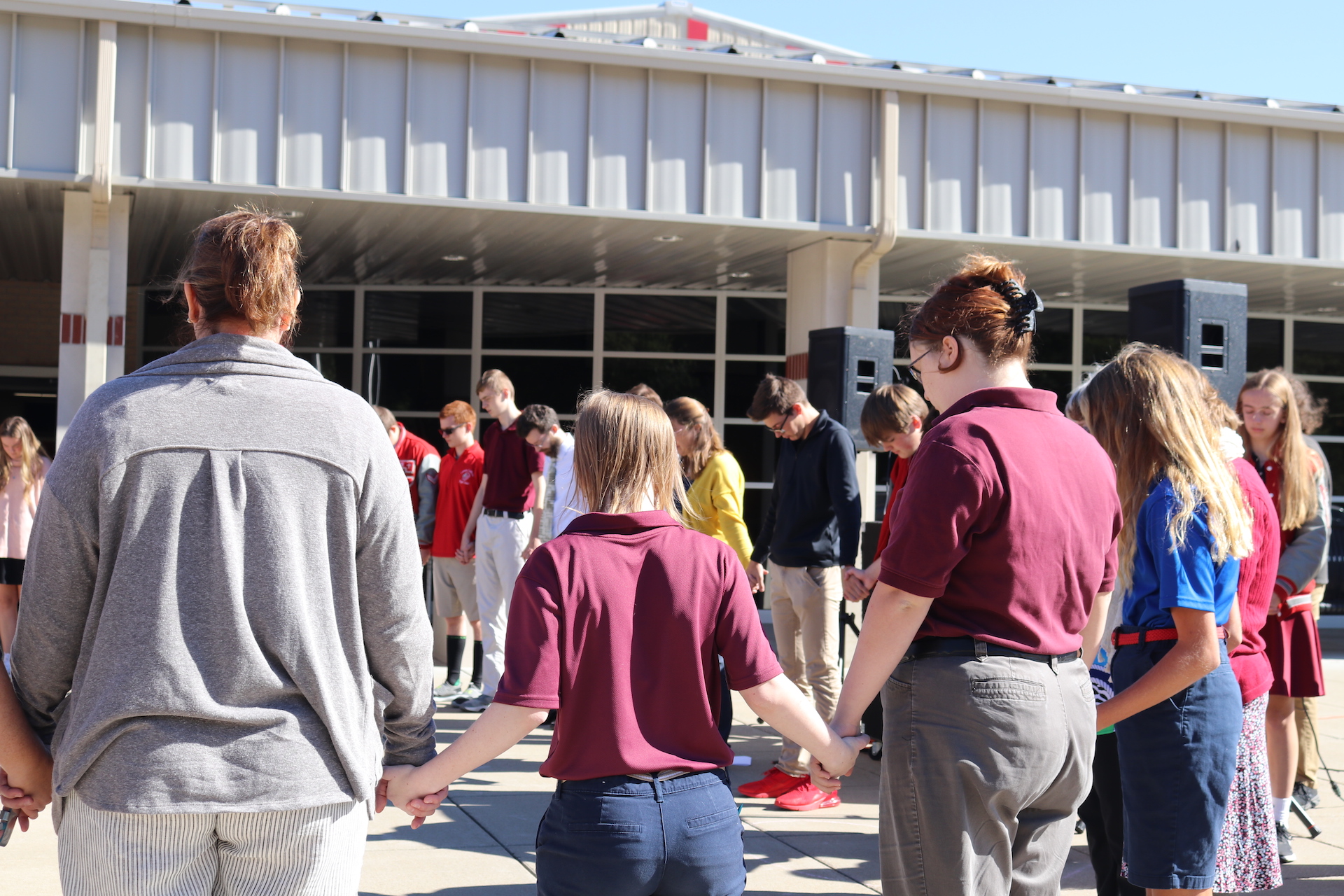 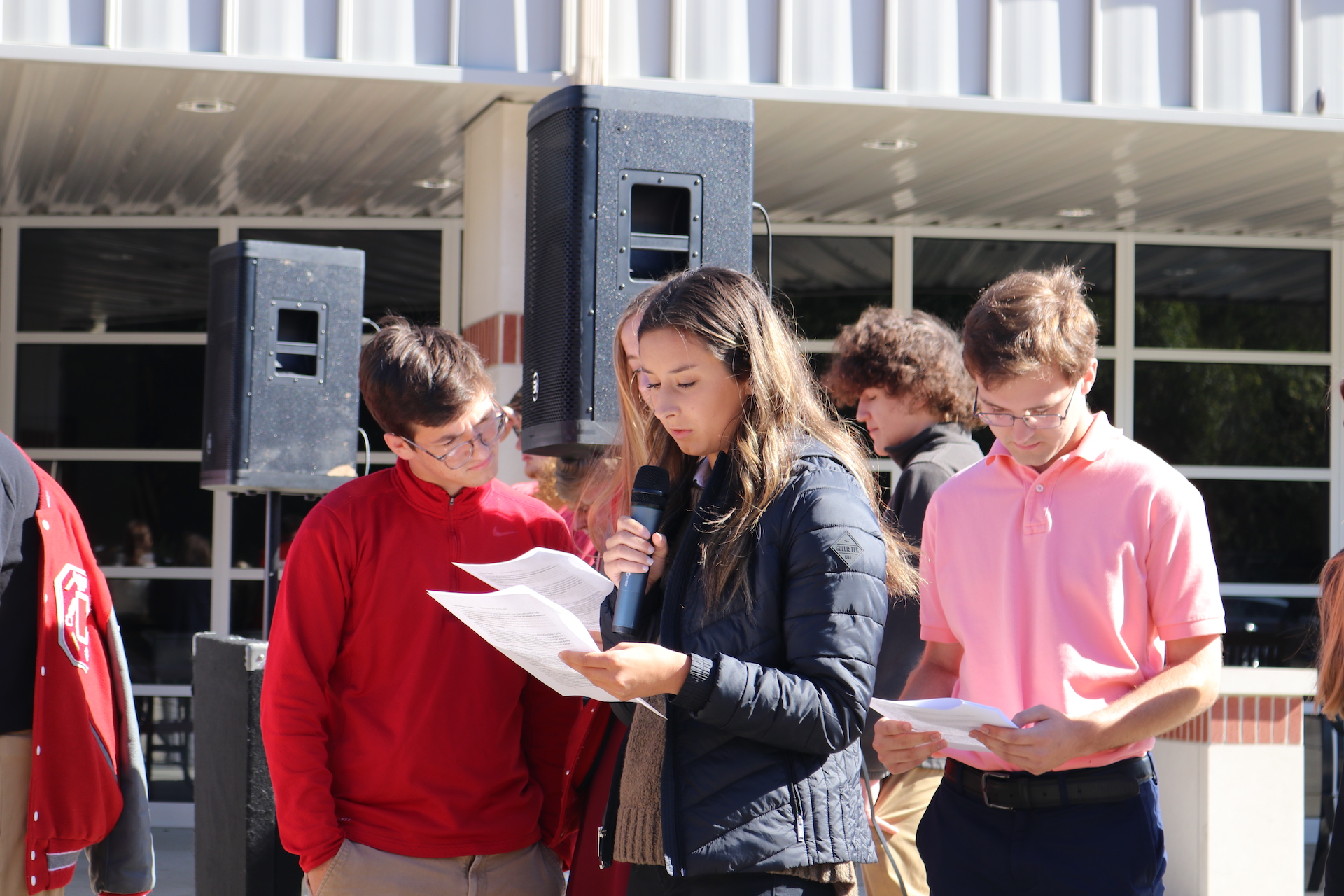 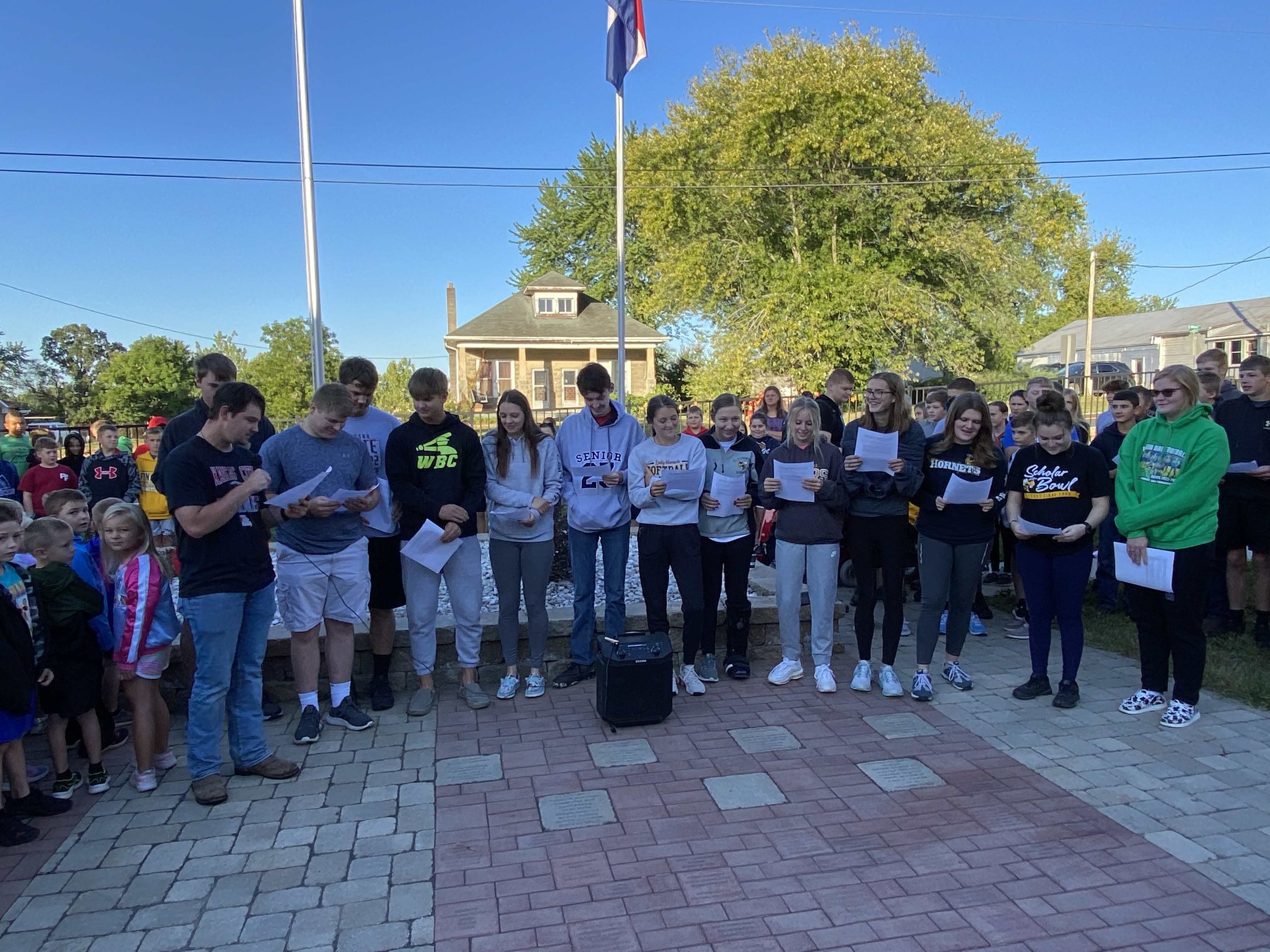 Submitted photo: St. Elizabeth students gather around the flagpole as Lane Hodge reads a prayer for See You at the Pole Wednesday, Sept. 28, 2022. Knights of Columbus also provided donuts and orange juice for the event. 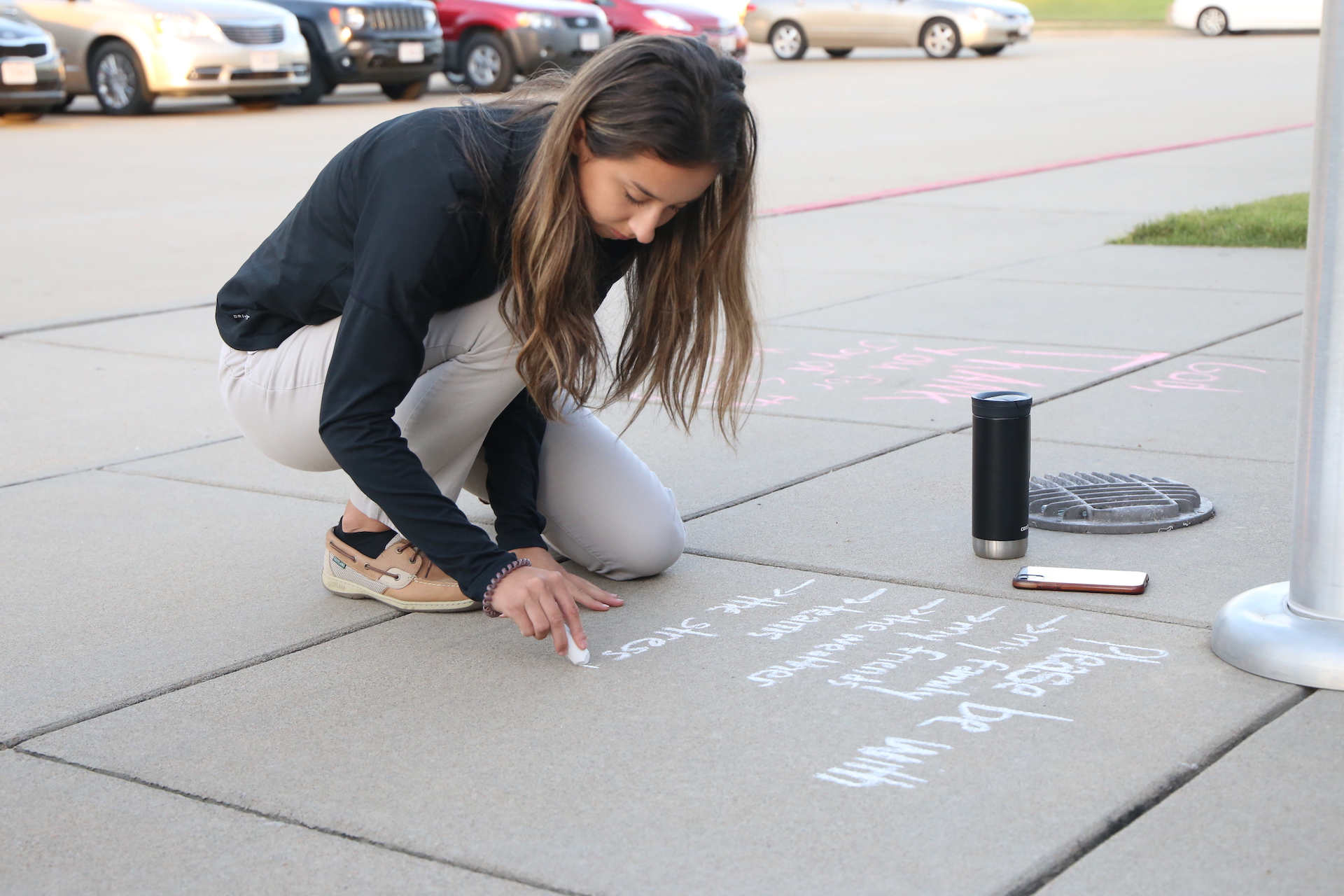 Submitted photo courtesy of Trina Lieb: Maddie Homfeldt writes a prayer in sidewalk chalk in front of Calvary Lutheran High School in Jefferson City as part of the week's events leading up to See You at the Pole. 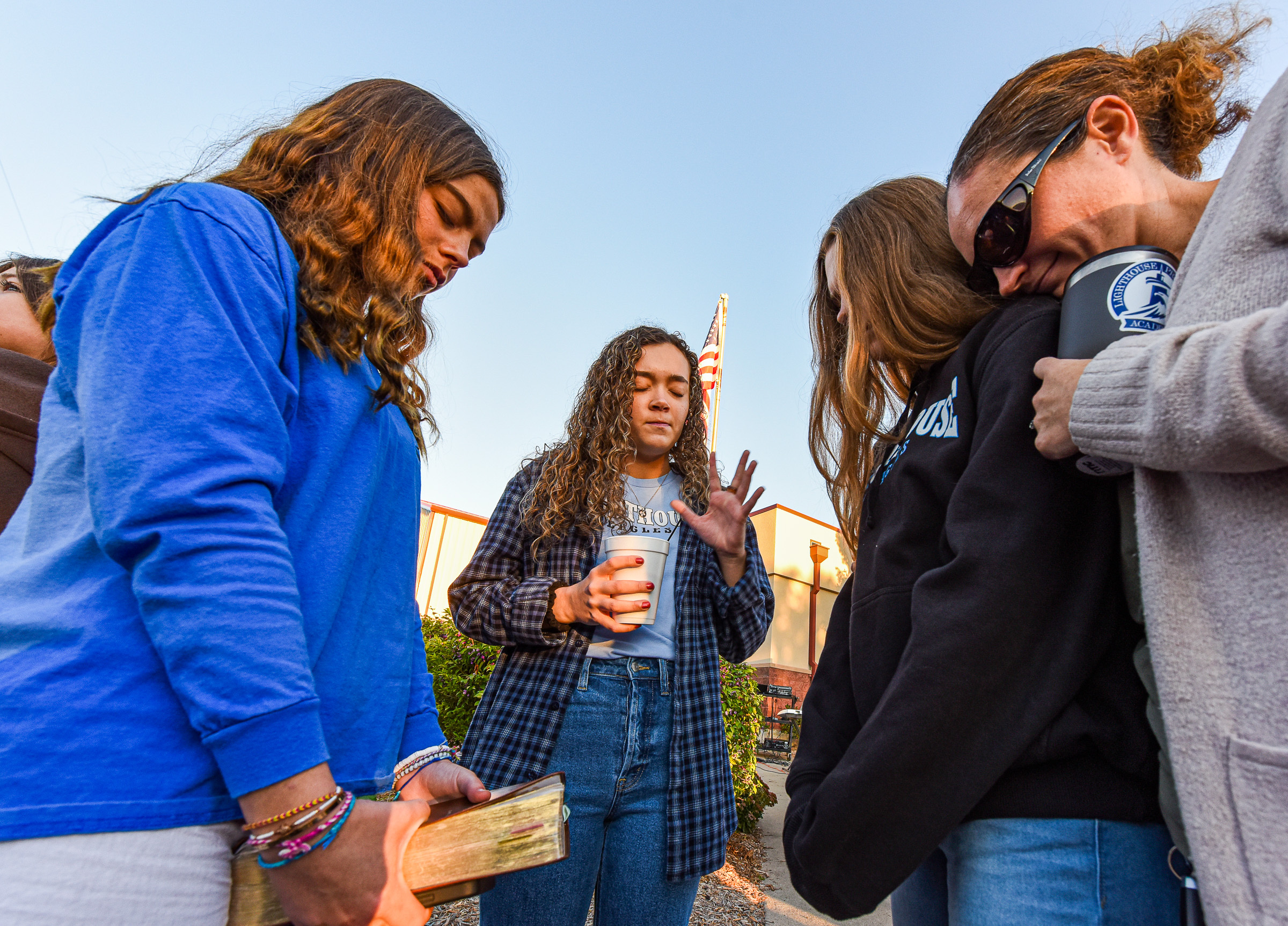 Julie Smith/News Tribune photo: McKenzie Bacon, left, Kiersten Spears, Livie Propst and her mom Lindsay Propst formed a small circle in breakout prayer Wednesday, Sept. 28, 2022, during See You at the Pole ™ activities at Lighthouse Preparatory Academy in Jefferson City. Students, faculty and staff were joined by parents during the student-led program in the school parking lot. 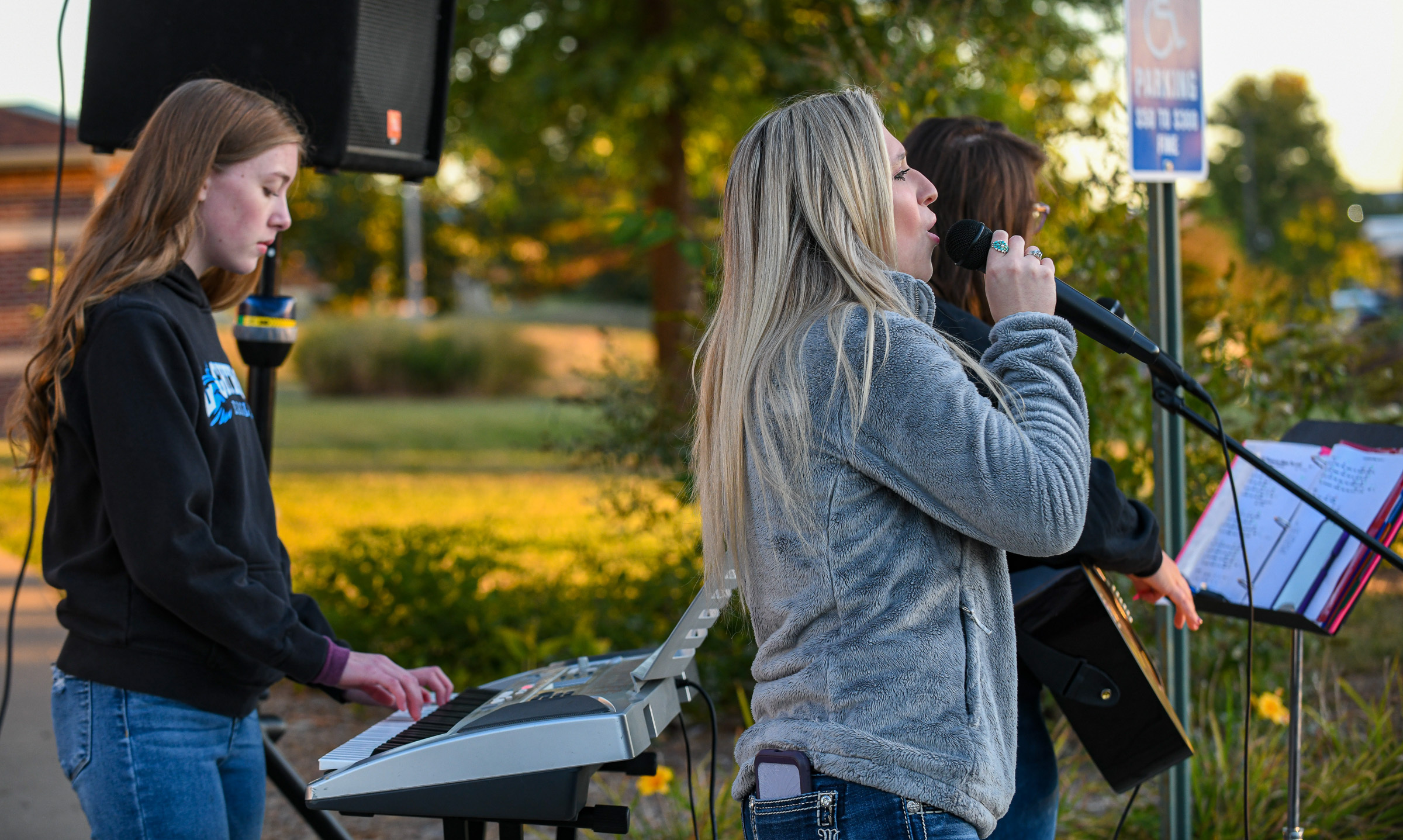 Julie Smith/News Tribune photo: Caitlyn Thompson sings as Chloe Kadow accompanies her on guitar while Scout Henry add to the music by playing the keyboard. Students led the activities Wednesday morning, Sept. 28, 2022, at Lighthouse Preparatory Academy as the school hosted See you at the Pole™ in the school parking lot. The event began with the Pledge of Allegience before music and vocals were provided by students. Students were joined by faculty, staff and parents for the morning activitiy, which concluded with individual prayer groups asking for guidance and support. 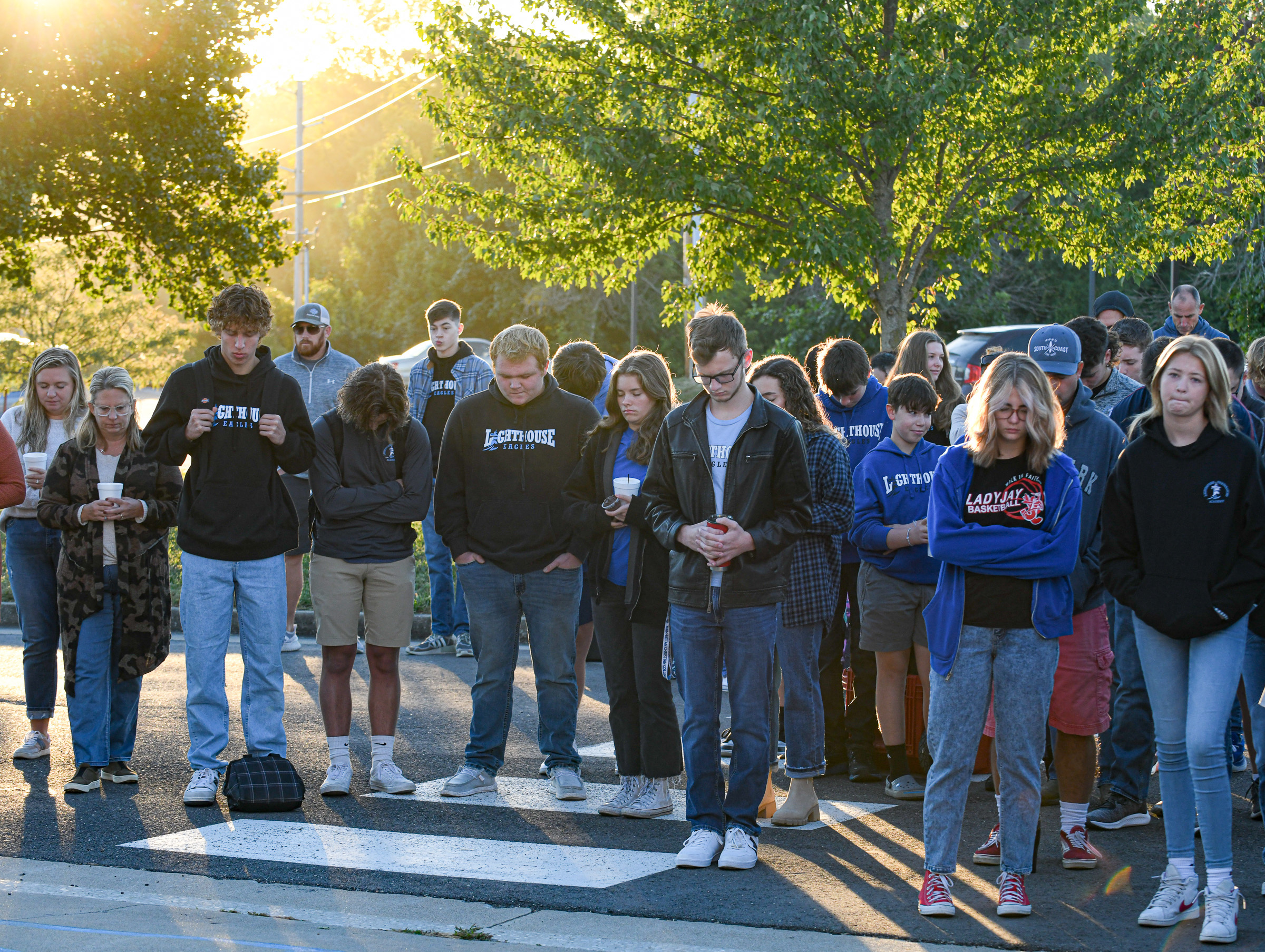 Julie Smith/News Tribune photo: As the morning sun rises over the tree tops, students, parents and staff bow their head in prayer Wednesay, Sept. 28, 2022, during See You at the Pole™ activities at Lighthouse Preparatory Academy. The student-led event featured music, singing and a number of prayers for specific reasons. 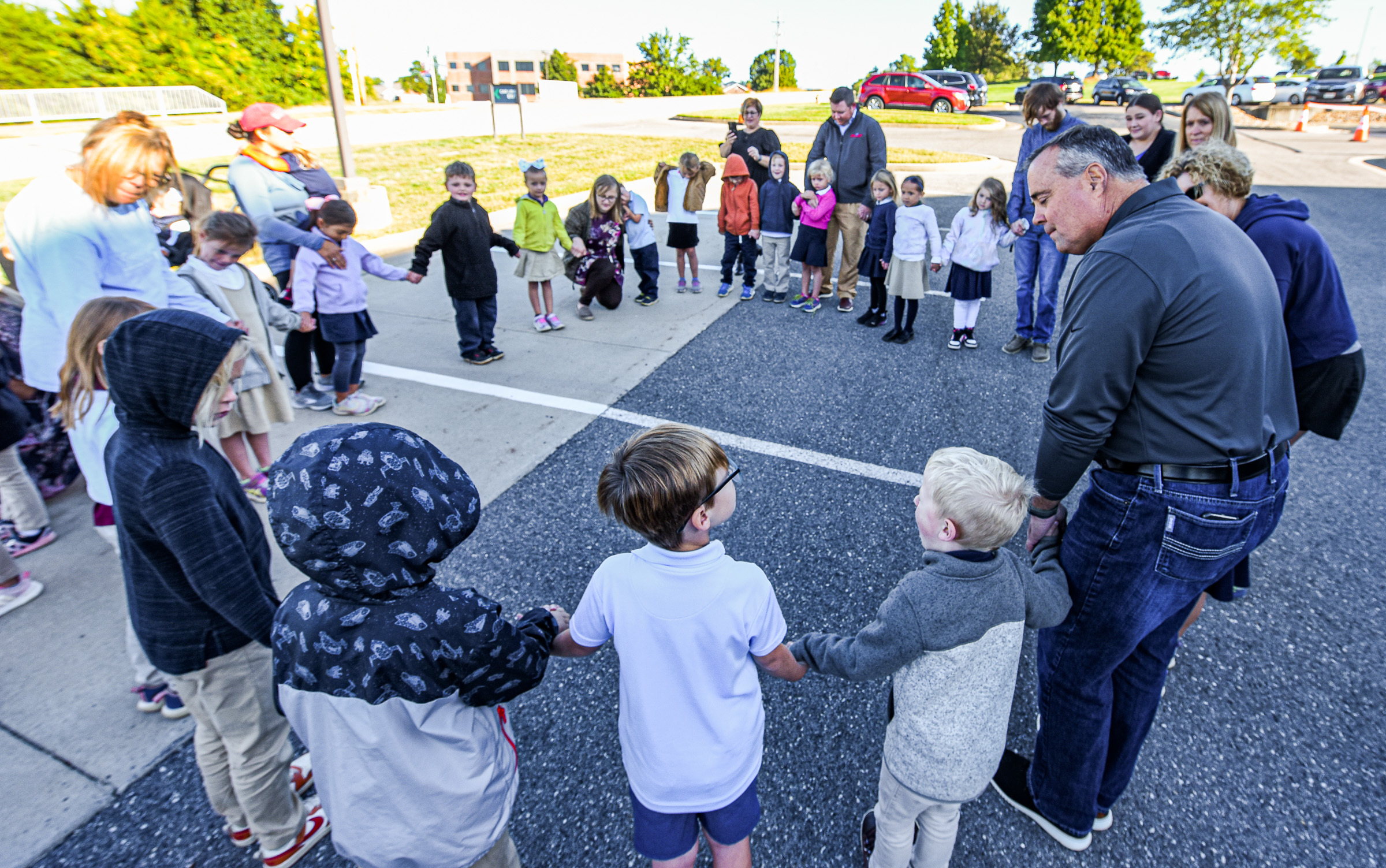 Julie Smith/News Tribune photo: Following an organized prayer event, Students, faculty, staff, parents and grandparents joined in smaller breakout groups in further prayer during the the celebration of See You at the Pole™ activities at River Oak Christian Academy Wednesday morning, Sept. 28, 2022. Activities happened nearly simultaneously at multiple area schools and across the country in this display of patriotism and prayer. 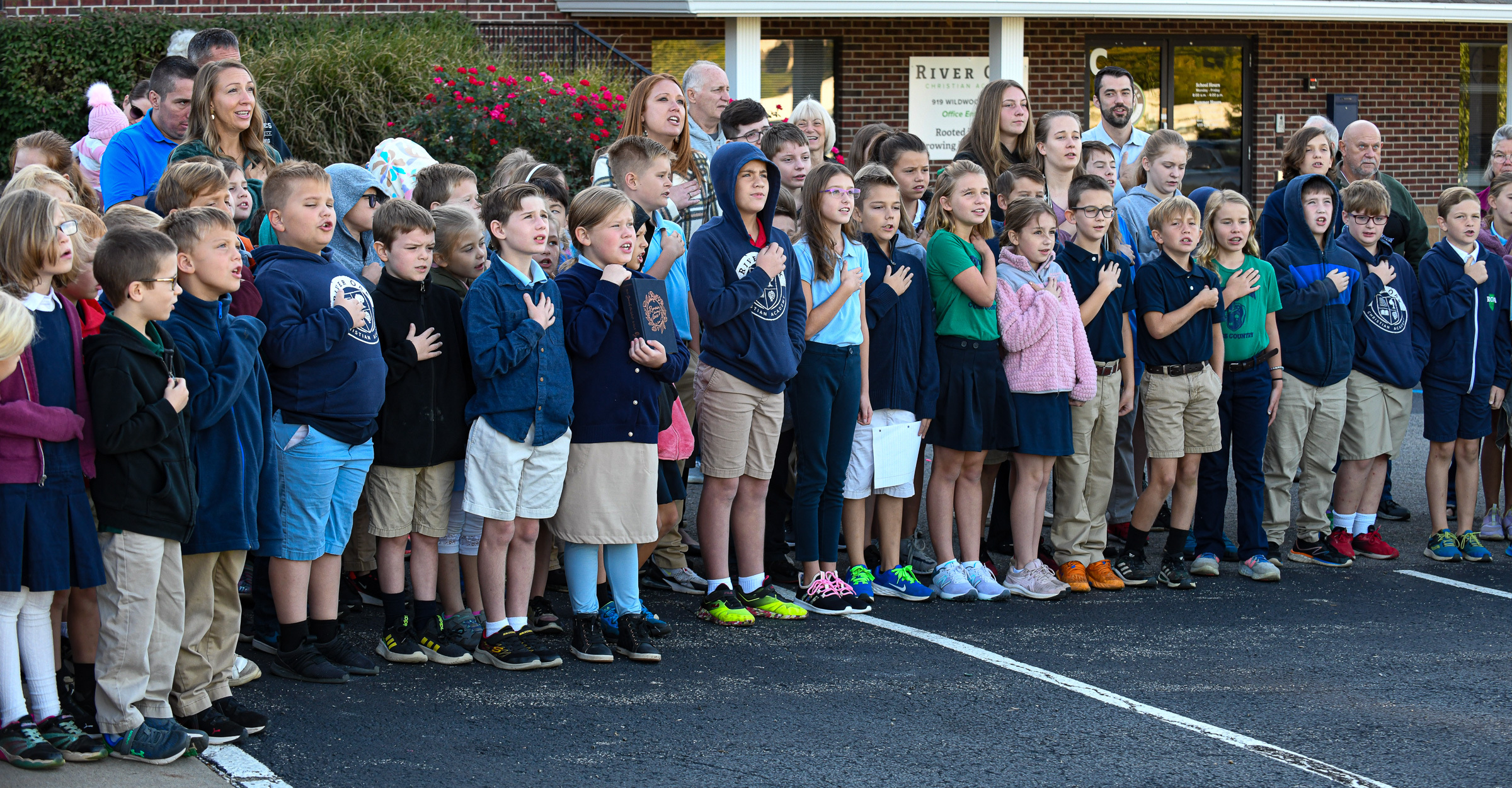 Julie Smith/News Tribune photo: Students, faculty and staff stand with hand over heart and look up to the American flag during the Pledge of Allegience Wednesday, Sept. 28, 2022, at River Oak Christian Academy in Jefferson City. The school hosted See You at the Pole™ activities on the parking lot near the school's flag pole during which they joined in a nationwide celebration of patriotism and prayer. 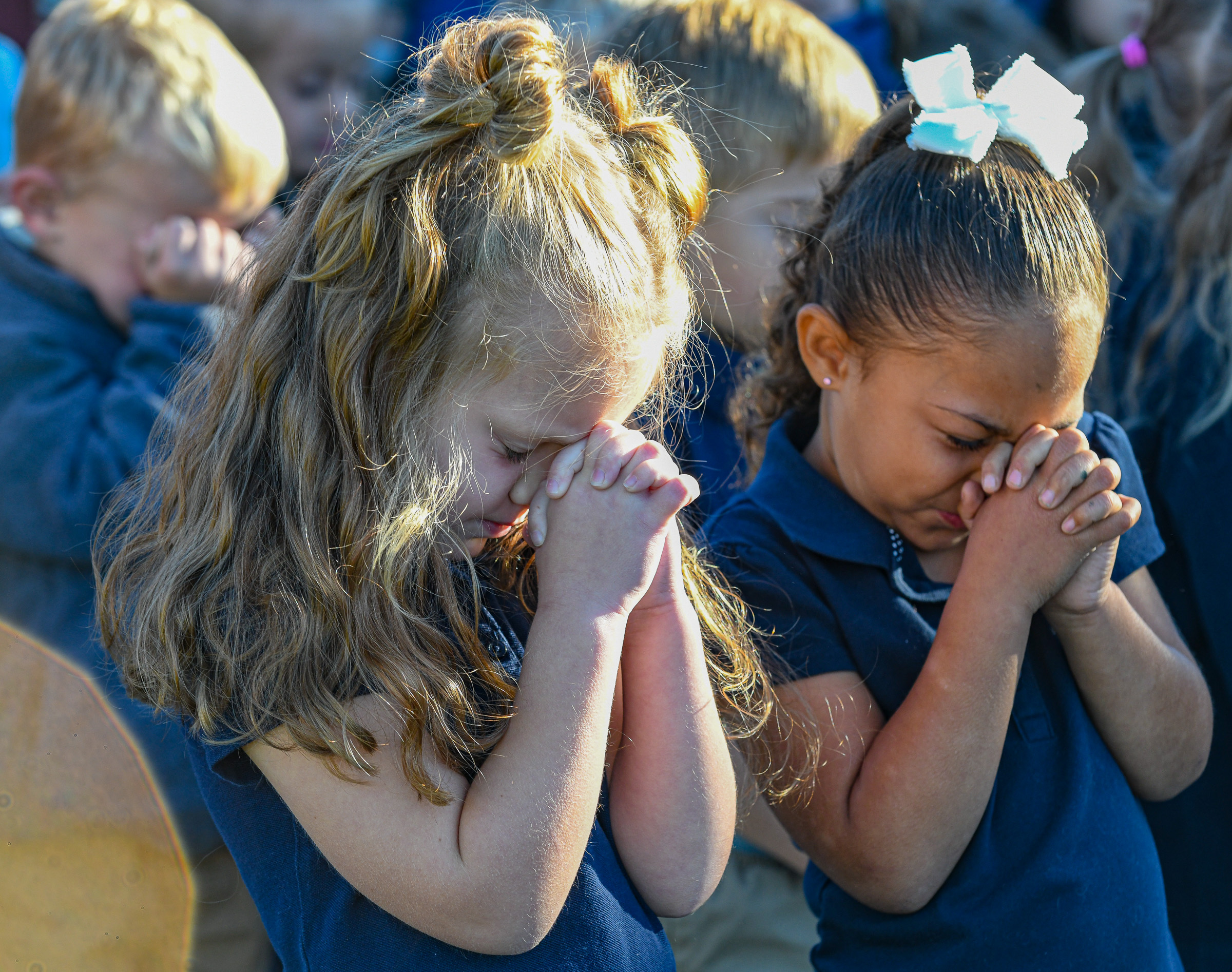 Julie Smith/News Tribune photo: Ava Schrage, left, and Aaliyah Bopp, bow their heads and pray along with student leaders Wednesday, Sept. 28, 2022, during See You at the Pole™ activities at River Oak Christian Academy. Both girls are in kindergarten prep class at the west Jefferson City school.

Print Headline: Area students join together for prayer in ‘See You at the Pole’ event