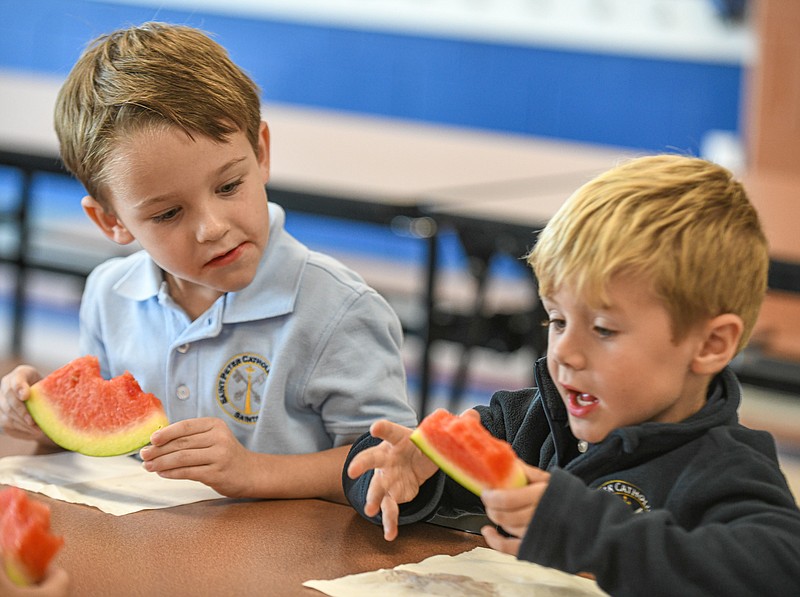 Julie Smith/News Tribune photo: Maddex, at right, and Ben, enjoy a slice of watermelon Tuesday, Sept. 27, 2022, following a visit by Kim Fischer of Fischer Farms in north Jefferson City. The boys are in kindergarten at St. Peter Interparish School where the lunchroom is provided locally grown watermelon from the nearby farm.

The kindergarten and first-grade students at St. Peter Catholic School watched with eager anticipation as local farmer Kim Fischer slipped the knife into the large, round watermelon.

She made one cut, then another, and then she grabbed both halves and gave them a sharp tug.

With a roar of excitement, the students watched the watermelon split open and reveal its crisp red fruit.

While it was likely not the first watermelon students had seen, for many, it may have been the first time they understood where their lunchtime fruit comes from.

"How many of you have eaten the watermelon that we've been serving in the cafeteria?" cafeteria manager Debbie Schrimpf asked the assembled students. "Well, guess who grew the watermelon? Ms. Kim Fischer!"

"We've been serving local watermelon since the start of school, and we were excited that we could do it from a farm right across the river," Schrimpf later explained.

Schrimpf said watermelon from Fischer Farms has been offered in the meal line once a week and every day at the salad bar. The cafeteria has also been able to serve local fresh cucumbers and peppers.

She said before working with Fischer Farms, the school rarely served watermelon because it was difficult to get high quality watermelons from the grocery store.

"I got interested in doing it because the Department of Agriculture from Missouri was offering schools the opportunity to try and serve from a farmer and they would reimburse your money, and right now, with food being so expensive and the kids going back to school and now everybody's paying for their meal -- because for the last two years, COVID gave everybody free meals -- I thought this would be an opportunity to get something I know we all love," Schrimpf said.

Fischer told the students about all the items they grow at Fischer Farms, which also offers a fall pumpkin patch.

She brought clippings of the various crops they grow to show students what they looked like: corn, soybeans, watermelon and pumpkins.

She held up a watermelon hanging off a vine that had just begun to grow to show students what it looks like at first.

"It's so tiny," exclaimed one student.

The farm grows 20 acres of watermelon. They start the watermelon in greenhouses, and when the plants reach about 4 inches, they plant them in the ground. The watermelons take about 63 days to grow, so Fischer said they stagger the plantings so they don't have to pick all 20 acres at once, and the watermelons will be available up until the first frost.

"People always ask me how you can check and find a good watermelon," Fischer said.

If you rap your knuckles on the watermelon, it should make a nice "ping" sound, she said, rather than a dull thump.

She also showed the students a watermelon with yellow fruit inside its green rind. She said she brought some of that watermelon to a party once, and everyone thought it was pineapple.

The teachers passed the yellow watermelon halves around, and students enthusiastically reached out to smell and touch the fruit.

Fischer also explained how corn can be used for ethanol and plastics as well as animal feed. She showed students what soybean pods look like, and then answered questions about how watermelon, pumpkins and corn grows.

Cafeteria staff chopped up a few watermelons so each student could have a slice before they returned to their school day.

Schrimpf saw the arrangement with Fischer Farms as a win-win because the school could get the rebate, and it would help a local farmer who delivers the produce fresh.

"You just feel good giving (students) something that's so healthy, so fresh, and locally grown," she said. 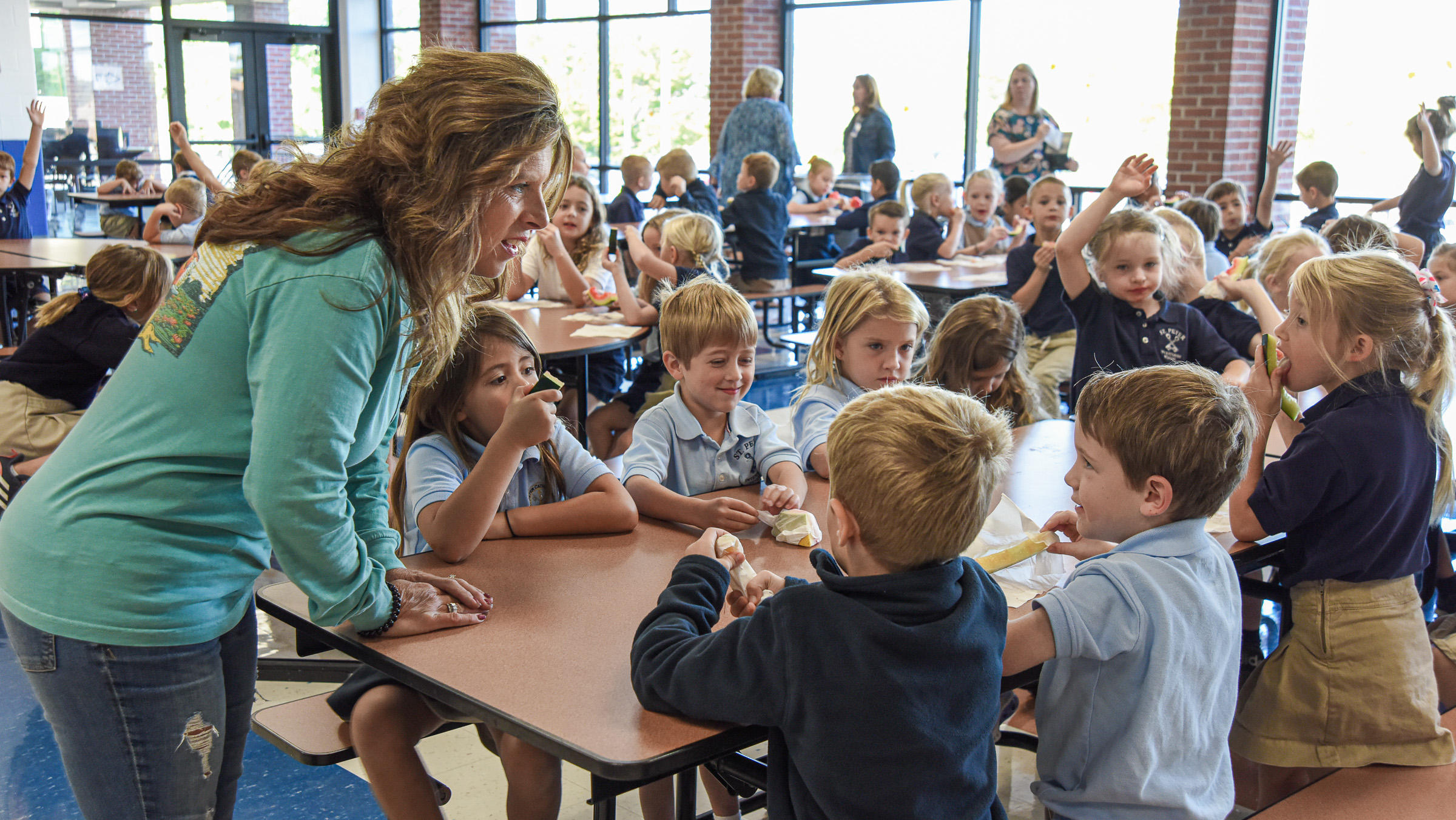 Julie Smith/News Tribune photo: Kim Fischer of Fischer Farms, at left, leans in to answer questions as she visited St. Peter Interparish School Tuesday, Sept. 27, 2022, during which she explained to the youth how they grow watermelon, pumpkins and other agricultural items. The school acquires watermelon from the farm to serve in the cafeteria. The staff enjoys knowing the source of the food and appreciates it being locally available.