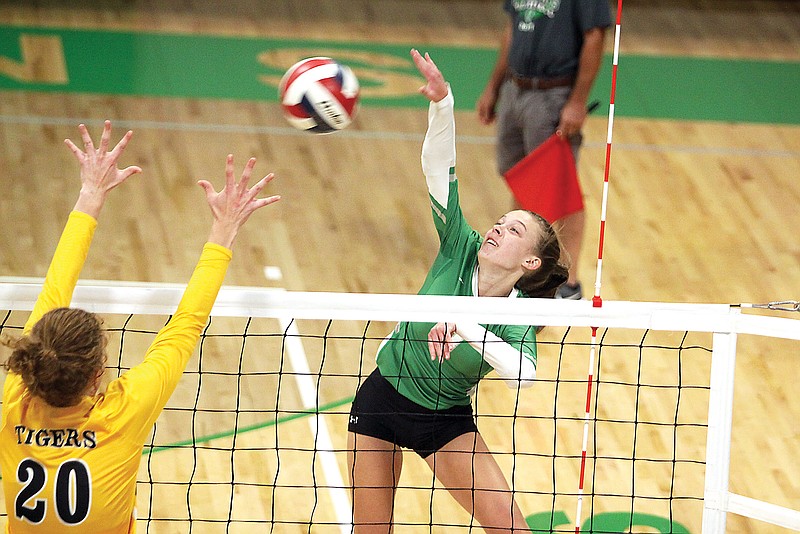 Blair Oaks outside hitter Aubrey Hardwick spikes the ball at the net against Kylee Richey of Versailles during Tuesday’s match in Wardsville. (Greg Jackson/News Tribune)

“That’s kind of crazy to me,” Wekenborg said Tuesday after Blair Oaks swept the Versailles Lady Tigers 25-23, 25-20, 25-13 for another conference title.

Blair Oaks finished the conference season with another 7-0 record, pushing its streak of consecutive Tri-County match wins to 58. The last time the Lady Falcons lost in conference play was Sept. 11, 2014, falling 13-25, 20-25 at California.

“That’s one of our goals each year, to make sure we continue and carry on that tradition,” Blair Oaks coach Megan Distler said.

“This program has been the top of the Tri-County Conference since our seniors were young,” Distler said. “It’s a year in, year out tradition, and other girls want to be a part of it.”

Blair Oaks has not taken winning a conference title year after year for granted, knowing a target is on its back every match.

“We know all those teams are going to be playing their best game against us, because they want that title,” Distler said. “So our girls have to be on their game all the time, to make sure we’re taking care of business.”

Blair Oaks led 24-19 in the first set against Versailles. The Lady Tigers fought off four set points before the Lady Falcons got that 25th point.

“It just took us a while to get that last one,” Distler said. “But we did finally pull it out.”

In the second set, Versailles closed the gap to 21-19 before Blair Oaks pulled away to take a two-set lead.

“We weren’t playing our sharpest form of volleyball,” Distler said. “We weren’t doing some of the little things.”

Blair Oaks saved its best for last in the third set. The Lady Falcons served six aces: two from Libby Juergensmeyer and one each from Bailey Braun, Autumn Bax, Wekenborg and Tayla Prenger.

“That was the opposite of our first two sets, we missed a lot of serves in the first two sets,” Distler said. “We finally focused a little bit back there, maybe played less worried about making those errors.”

Bax had a team-high 15 kills for Blair Oaks, while Braun had eight kills. Wekenborg and Aubrey Hardwick each added six kills.

Juergensmeyer finished with 30 assists, Hardwick had 10 digs, Braun and Prenger each had nine digs, Bax and Juergensmeyer each served four aces and Bax added two blocks.

“We’ve come together as a team,” Wekenborg said. “We know what we’re expecting from each other.”

Winning conference is the first goal of the season Blair Oaks can cross off its checklist.

“We work hard in practice to accomplish those goals,” Wekenborg said. “We’ve set more goals, like winning all home games.”

Wekenborg is looking forward to passing the torch to next year’s team to keep the conference title streak going.

“It feels good, knowing that we can trust the juniors into getting that No. 13,” she said.

The Lady Falcons’ next match is an important one for another item on their checklist of season goals. Blair Oaks (19-2) hosts Fatima (7-8-2) on Thursday, with the freshman match starting at 5 p.m., followed by the JV and varsity matches.

Blair Oaks and Fatima are both in Class 3 District 8, and the Lady Falcons are eyeing the No. 1 seed in the district. Blair Oaks already has wins against district foes Boonville, California and Southern Boone.

“Winning against California was a good one to help us get that No. 1 seed,” Distler said. “Winning Thursday night would be a really good one, also.”

There was no freshman match.