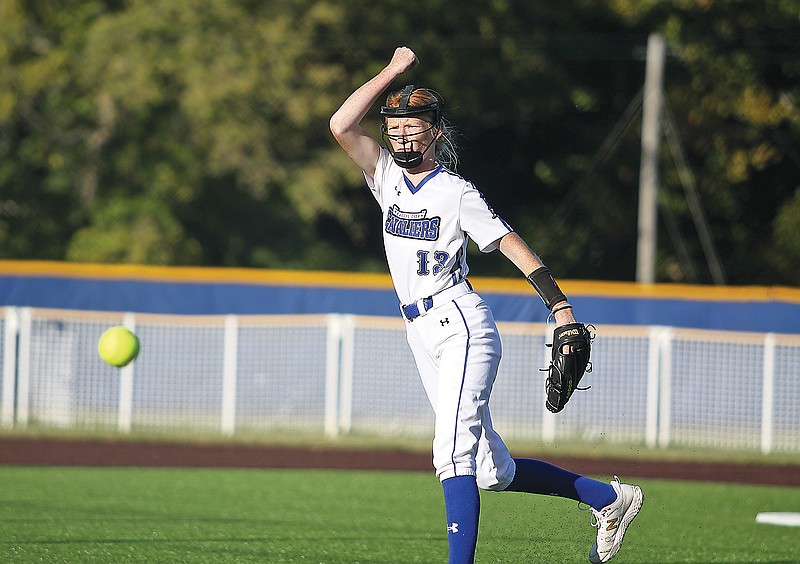 Capital City collected 12 hits and put plenty of runners on the basepaths, as the Lady Cavaliers topped the Camdenton Lakers 9-0 at Capital City High School.

“They didn’t throw their No. 1 pitcher, and we were gearing up to see their No. 1,” Capital City coach Brett Skinner said. “But still, you’ve got to come in and make adjustments. We hit some hard balls and we made a lot of hard outs.

“It was good to see, we needed that from our offense.”

Capital City’s offense was aggressive at the plate, as its first 18 batters saw only a total of 38 pitches.

“That was a product of their pitcher being around the strike zone,” Skinner said.

McKenna Schwarzer started the scoring for the Lady Cavaliers, as she scored on Faith Karr’s two-out error in the bottom of the first inning.

The Lady Cavaliers had five hits in the second inning. Camryn Sharp’s RBI double to left field scored Annie Spratt, then Emma Stieferman went the other way with a two-out double to right field, scoring Sharp and Schwarzer to make the score 4-0.

Stieferman added another opposite-field single in the fourth inning.

“She’s turning into a complete hitter,” Skinner said. “Last year, she was a heavy pull hitter. This year, she’s letting the ball get deep in the zone and will take that pitch the other way. It just makes her a more dangerous hitter at the plate.”

Lydia Coulson scored on an error in the third inning to extend Capital City’s lead to 5-0.

The Lady Cavaliers plated their remaining four runs in the fifth inning.

Eight of Capital City’s nine players in the batting order had at least one hit.

“We’ve got to keep that going,” Skinner said.

Schwarzer, Coulson and Fluellen joined Stieferman with two-hit games. Capital City’s offense only had one strikeout, and it came on the final batter in the bottom of the sixth.

As it turns out, that unearned run in the first inning was all the run support Coulson would need in the pitcher’s circle.

“Lydia maybe didn’t have her best stuff, her velocity was a little bit down,” Skinner said. “But our defense made several plays behind her.”

Coulson had eight strikeouts through the first four innings, so Camdenton tried to use small ball to get a run in the fifth inning following a leadoff walk.

The plan backfired, as Coulson got the next batter to foul out on a bunt to Karr behind the plate for an out. Karr then quickly fired the ball to second baseman Kylie Baker, who was covering first base and doubled off the runner to end the threat.

“We practice that all the time,” Skinner said of bunt situations, “because if teams are struggling, they’re going to play small ball against her. You think on bunting, you’re going to be fielding balls on the ground, but you have to mix in those pop-ups, make sure they’re on their toes and aware.”

Coulson closed out the three-hit shutout with three strikeouts in the seventh inning, giving her 11 strikeouts to just one walk.

“It’s pretty scary when she can have an ‘off’ game and still strike out 11 and only give up three hits,” Skinner said.

Entering the game, Capital City was ranked No. 3 in Class 4 by the Missouri High School Fastpitch Coaches Association. Camdenton (15-5) is ranked No. 7 in Class 4.

“It was a team win,” Skinner said.

Capital City (15-5) is back in action today at Southern Boone. First pitch is at 5 p.m. in Ashland.