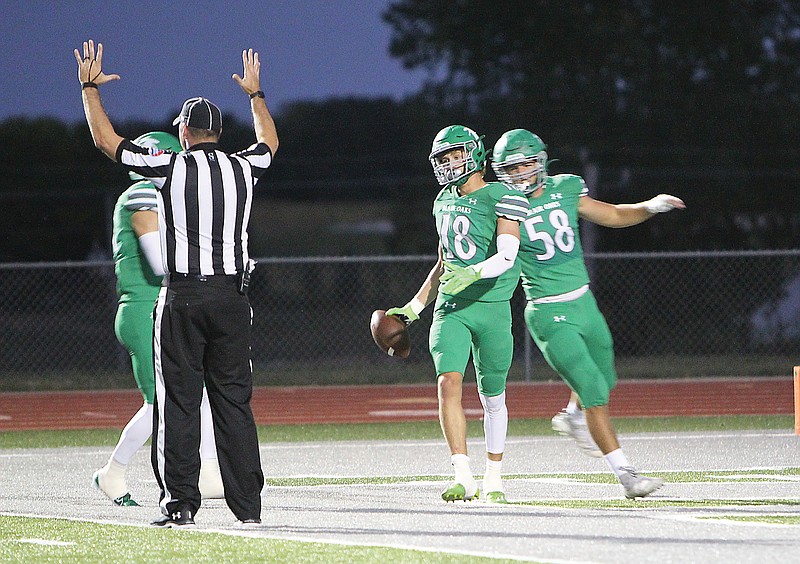 WARDSVILLE -- The Blair Oaks offense did two things Friday night that make for a good recipe for victory.

The first-team offense didn’t have a negative-yardage play and the Falcons did not turn over the football.

Blair Oaks did several other things well, like scoring six first-half touchdowns en route to a 52-13 victory against the Boonville Pirates at the Falcon Athletic Complex.

“Execution is key, and I can’t believe how well we executed and blocked tonight,” Blair Oaks coach Ted LePage said. “… Our offensive line is really opening up holes.”

The Falcons totaled 500 yards of offense, which surprisingly lowers their season average to 535.2 yards per game. Five of their seven touchdowns against the Pirates went for 30-plus yards.

“They really take pride in that,” LePage said of his players.

Blair Oaks had five turnovers through the first three weeks of the season. Now the Falcons have gone back-to-back weeks without an interception or a lost fumble.

“We had three (turnovers) a couple weeks ago (against School of the Osage), and that was so uncharacteristic of us,” LePage said. “In offense at practice, we’ve really tried to stress how important it is for us to have good ball security.”

Blair Oaks’ strong showing Friday was motivated by the Falcons’ 41-35 loss last season at Boonville. Sure, the Falcons avenged that loss once already, as they beat the Pirates 64-38 in the district playoffs.

But this weekend’s win gave Blair Oaks the outright lead in the Tri-County Conference standings.

“This week, we came out and we just really wanted to get after it,” Blair Oaks center Wyatt Bonnett said. “We came out, we had a lot of energy and we just decided that we’re not going to start slow anymore.”

Blair Oaks scored 50-plus points for the fourth time in five weeks. Bonnett summed up the Falcons’ offensive outburst with two words.

“Dylan Hair,” he said with a laugh.

“He’s getting fun to be around on the sideline,” LePage said. “He’s coming off and saying ‘I’m seeing this’ and ‘I’m seeing that.’”

Hair surpassed his older brother’s record on a 48-yard touchdown pass to Zack Prenger on the final play of the first quarter, making the score 28-6. Prenger caught the ball near the 20-yard line, then raced past the Boonville secondary into the end zone.

“That was a really good catch, and he ran really hard,” LePage said. “He’s got more speed than anybody anticipates.”

Hair’s other two touchdown passes were to Alec Wieberg for 36 and 63 yards. The second touchdown came on a slant pass in the third quarter, where Hair hit Wieberg as he cut across the middle, then Wieberg won a foot race against his defender.

“Alec said, ‘If you do this motion, this route is there,’” LePage said. “Dylan said, ‘I can throw it.’ … Those two have been playing pitch and catch since the fourth grade, so that looks like old hat.”

Hayden Lackman added a 1-yard touchdown run for the Falcons and Adam Hall scored on a jet sweep from 63 yards. The Falcons ran three jet sweeps Friday for a total of 81 yards between Hall and Nick Closser.

“People have adjusted their defenses and their starting to bring guys downhill,” LePage said. “When that happens, you get weak on the edge.

“We thought this week would be a great week to get them back involved in the running game.”

“We were able to contain (Boonville defensive end Tyson Ellison),” Bonnett said. “He’s a good player and we made sure he wasn’t in on too many plays.”

The Blair Oaks defense also did its part, holding Boonville to just 221 yards of total offense. That’s nearly half of the Pirates’ 437.3 yards-per-game average heading into Friday’s contest.

The Falcons have held three of their past four opponents to less than 100 yards rushing.

“Early in the season, we were hesitant,” LePage said. “Defensive football, when you really boil it down, it comes down to two things: believe with your eyes and run with your feet.

“Then you have to get there with physicality, and that’s one thing we’re really trying to stress.”

Boonville scored its two touchdowns in the first half. Caton turned a broken play into a positive, throwing a 57-yard touchdown pass to Jackson Johns. Backup quarterback Evan Bishop rolled to his left and found Blake Griffin for a 15-yard touchdown pass in the final minute of the second quarter, cutting Blair Oaks’ halftime lead to 42-13.

Those were the only blemishes on the night for the Falcon defense, which has allowed just 40 points in the past four games after giving up 42 points to Maryville in the season opener.

“That’s what I’m picking up from our defense,” LePage said. “We talk about the communication, but it’s also the execution they’re doing after they communicate.”

Wieberg also had an interception for the Falcons, who have recorded at least one interception in each game this season.

“We’re not there yet, but we’re getting closer,” LePage said.

Nolan Laughlin made a field goal for the second straight week, booting it from 24 yards with 5:24 left in the game.

“I felt like the offense, defense and special teams all played equally well tonight,” LePage said.

With four weeks left in the regular season, Blair Oaks is atop the Class 2 District 2 standings with 56.8 points. Hermann (5-0) is second with 50.3 points.

“I see a bunch of hungry guys,” LePage said. “We still have that chip on our shoulder, and that’s good.

“But I really think it’s the progression that I’m most excited about. We’re progressing as a team and we’re cleaning up things we’re doing wrong.”