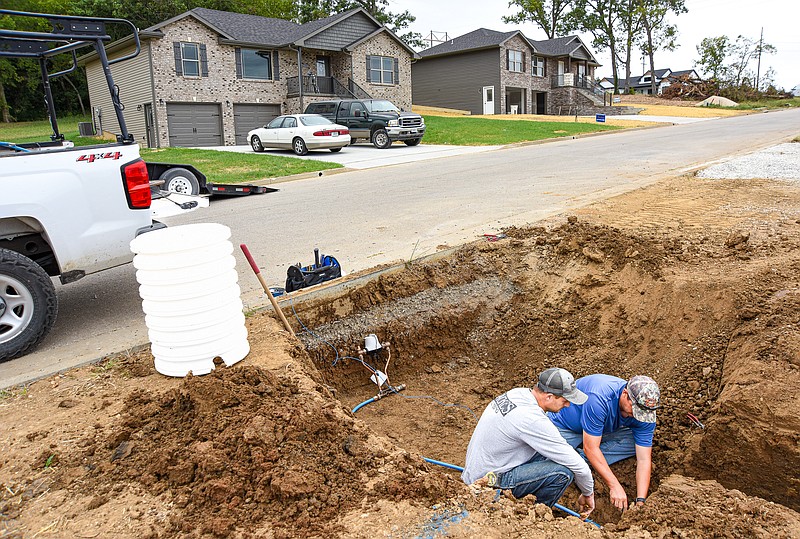 Julie Smith/News Tribune Scot Nilges, right, and Derick Backes, install a water line into a new home under construction in SummerField Estates. Nilges is a service technician with Public Water District No. 1 while Backes is with Backes Plumbing. Backes Plumbing has work scheduled for multiple new builds in the near distant future. Backes and other contractors were at work in the new subdivision off of Old Lohman Road, where multiple houses are in various stages of construction. Realtors do expect the housing market to cool slightly over the next few months.

After a run of high demand and hot prices, local agents believe a cooling is on its way for the housing market in Mid-Missouri and the country as a whole.

Beth McGeorge, a local Realtor with RE/MAX Jefferson City, said she has been watching the market, both locally and nationwide, to gauge where it might be going next. She said her research points to a cooling of the market -- which has seen high demand and soaring prices against low supply during the past couple of years -- rather than an impending crisis as some across the country have speculated.

"A lot of people are worried about the market crashing, but a lot of the consensus is that it's heading toward more of a cooling off or chilling out of the mayhem that was what we call the pandemic real estate market," McGeorge said. "There was a big jump up, and I think that's part of it -- it made buyers pause somewhat, and I think people can get tunnel vision sometimes."

She pointed to a sharp increase in values in 2020 that stayed fairly steady through last year, an unusual hike in the market as people found themselves in their homes more than ever before with remote work and education becoming a part of everyday life amid the COVID-19 pandemic.

Market conditions around the 2008 crash, meanwhile, were marred by mass foreclosures and people essentially walking away from their homes, a sharp contrast to what the housing sector is seeing today. With the current high equity values in homes, McGeorge said it would be rare for homeowners to walk away from a mortgage.

"We do not have as many homes listed as we have homebuyers looking, and as long as there's an imbalance there, we're going to see those values holding steady," McGeorge said. "But we're starting to see now a few price reductions and higher days on the market. It's not really reflected in our stats yet, but I think in 60 or 90 days, we'll be seeing a slight adjustment and a little dip in our average sales price, probably. But I think it will take a long time to really see a major change in prices because we still have so little inventory."

The current market demand is outpacing the norm considerably, she said: Historically, homebuyers could have a pool of 500-600 options across the local market before refining their searches to their more specific needs, like bedroom and bathroom counts, price ranges and school options. McGeorge said the overall pool recorded in the Jefferson City Multiple Listing Service, a database where those in the housing industry communicate their listings, was 162 available homes as of Wednesday. She said bidding wars on those homes are common.

She said these local trends fell in line with statewide and national figures. Last month's residential sales statistics from the Jefferson City Area Board of Realtors included a comparison to the same time last year for homes within the board's jurisdiction, which includes Cole, Callaway, Moniteau and Osage counties. This year's average sales price for the area thus far has been $233,176, while last August saw a year-to-date average of $209,243.

While the most recent data largely shows growth and consistency for the year, McGeorge said the data was likely to look different as the slight cool-down takes effect.

McGeorge said there were other indicators of the market shift beyond local statistics. Like anything else, from fashion to pop culture, market trends begin on the coasts and work their way in, she said. The secondary home markets along the coasts began to climb in February, an indicator she said was a bellwether of upcoming trends in the overall market. Voluntary transactions, like those for vacation or second homes, are early indicators of people's financial mindset and financials, she said.

Kayla Hoey, president of the Jefferson City Area Board of Realtors, shared a similar outlook on the market. She said the few homes that were available were being snatched up faster than the norm: While the average number of days on the market for local homes was 65 in 2018, 61 in 2019 and 60 in 2020, that measure dropped to an average of 20 days on the market for 2021, she said.

"They're going much quicker and above asking price now, although that is slowing down as we get farther into 2022," Hoey said. "It's definitely still a seller's market. While at the beginning of the year we were seeing so many offers above asking price, we're still seeing that, but not as crazy. I think COVID, interest rates and inflation did go into that."

Conditions likely aren't ripe for a bubble burst, Hoey said, and the lessons learned from the 2008 crisis are likely to keep any drops from spiraling out of control.

"I think we've been educated and we've been through it before, and I think there are stricter policies in place to prevent something like that from happening," she said. "There are requirements for pre-approval letters that might be required to have been dated within a few weeks or a month because even if someone was pre-approved last year, they might not be this year because of rising interest rates and other factors. Lenders are just making sure there isn't anything like that that could happen again."

Logan Gratz, a Realtor with Gratz Real Estate, said the local market has held up better than other places through prior market drops due to its stable job market with the epicenter of state government and manufacturing positions. As others across the country seek better economic positions, he said the area is primed to continue growing.

"We've got an influx of people wanting to live in Missouri. With COVID and remote and hybrid work, people realize they can live anywhere in the country and still be able to keep their jobs and use their dollars in the Midwest, where there's a lower cost of living," he said. "I think we'll continue to see that growth."

He said the Federal Reserve's massive interest rate drop, an effort to stimulate the economy amid the volatile pandemic market, was another element that drove a boom in demand. He said low rates brought many people who normally wouldn't have been in the housing market into it with new opportunities to refinance or buy. He said those rates likely wouldn't have been possible if not for the response to the pandemic.

And now that everyday life is settling into a new kind of normal, the Fed announced Wednesday it would be raising interest rates after they were slashed at the beginning of the pandemic. Federal Reserve Chairman Jerome Powell said the increase was an effort to cool "red-hot" housing prices and increase affordability in the market. In statements made during a Wednesday press conference, he also said the cool-down would take time and it would take more to balance the market.

"For the longer term, what we need is supply and demand to get better aligned so that housing prices go up at a reasonable level, at a reasonable pace, and that people can afford houses again," Powell said.

Gratz said part of the supply issue was new construction failing to rebound along with the market's growth since the 2008 crisis, an issue that has been further aggravated during the past couple of years amid supply chain issues and workforce shortages.

"We do have some construction going on, of course, but it's slow. There's high demand and not enough new construction or developments to keep up with the demand of the people wanting to be here," Gratz said. "So until we can get inventory to match that demand and growth, I think we'll stay fairly flat."

McGeorge, Hoey and Gratz all agreed their best advice for those hoping to buy or sell at the moment was to work with an experienced Realtor to get the most out of the transaction.

"We know how to navigate it. We've done it for years, and we've done it through COVID," Hoey said. "We still do find you a home or can help you sell it. We know the market here." 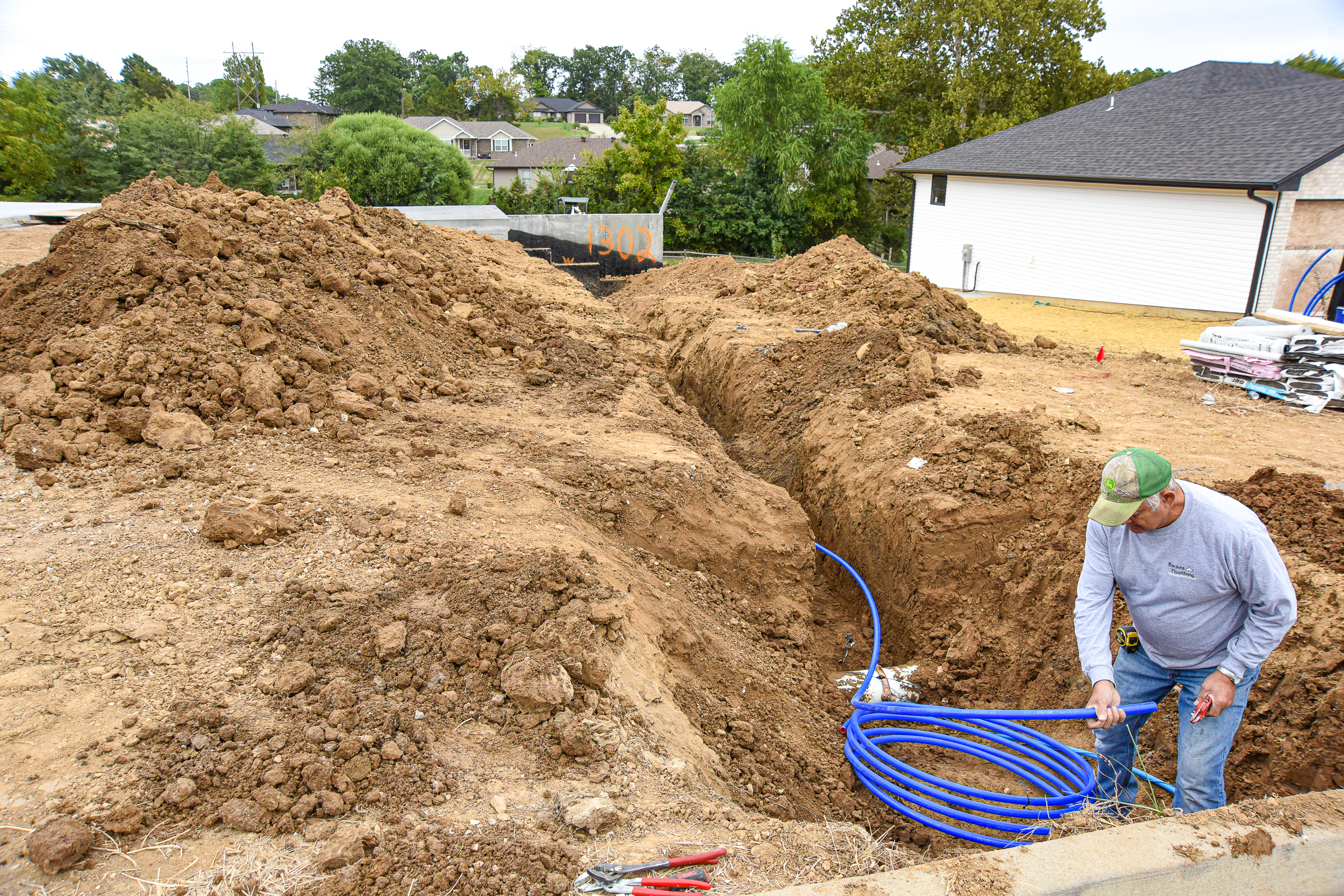 Julie Smith/News Tribune Richard Backes of Backes Plumbing uncoils blue tubing as he prepares to hook onto the county water line. Contractors are at work in the new SummerField Estates Subdivision off of Old Lohman Road, where multiple houses are in various stages of construction. Realtors do expect the housing market to cool slightly over the next few months. 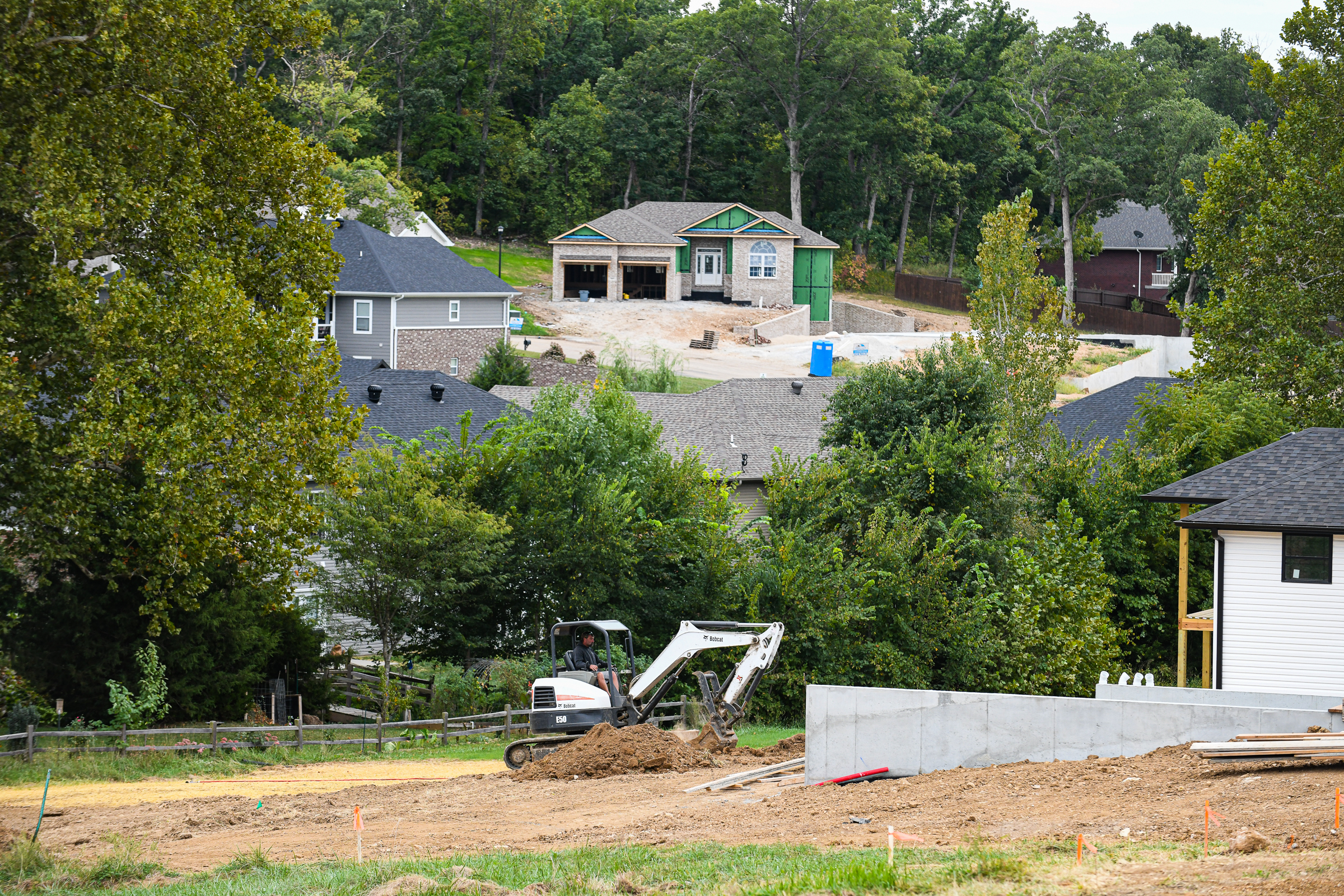 Julie Smith/News Tribune Area contractors are busy trying to keep up with the demand for new housing in the area but realtors do expect the market to slow down just a bit in the near future.