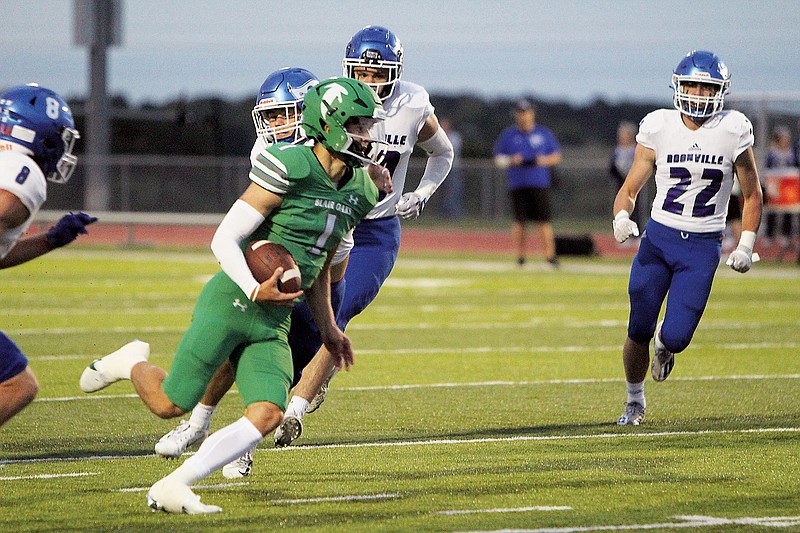 Dylan Hair of Blair Oaks breaks loose on a run during Friday night’s game against Boonville at the Falcon Athletic Complex in Wardsville. (Gracen Gaskins/News Tribune)

WARDSVILLE -- The Blair Oaks Falcons are back in first place, and they did it with an exclamation point Friday night.

Blair Oaks dominated from start to finish, taking sole possession of the top spot in the Tri-County Conference with a 52-13 win against the Boonville Pirates at the Falcon Athletic Complex.

“What an incredible start,” Blair Oaks coach Ted LePage said. “We got a first-drive score, then we turned around and got a three-and-out, and we immediately got another score. It was a great momentum starter.”

The Falcons scored on every possession, with the exception to two drives that were cut short due to the end of each half.

It only took three plays and 58 seconds before Blair Oaks took a 7-0 lead against Boonville. Dylan Hair threw a 28-yard pass to Nick Closser, then Hair followed with a 16-yard run and an 8-yard touchdown run. Nolan Laughlin added the first of his seven extra points.

Blair Oaks’ next drive also lasted just three plays. This one ended with a 33-yard touchdown run by Hair, who danced his way through the Boonville secondary and found an opening along the right sideline.

The following possession lasted just one play, as Adam Hall took a jet sweep to the left sideline and raced into the end zone for a 63-yard score.

The Falcons’ fourth touchdown came on the final play of the first quarter. After a 45-yard touchdown pass to Hall was negated by a holding penalty, Hair threw downfield under pressure and connected on a 48-yard touchdown strike to Zack Prenger to make the score 28-6 after 12 minutes.

That touchdown pass also made Hair the all-time career passing yards leader in Blair Oaks history. He surpassed the mark of 8,786 passing yards set by his older brother, Nolan Hair, who played for the Falcons from 2015-18.

Prior to Hair’s touchdown pass, Boonville scored its first touchdown on a 57-yard pass from Colby Caton to Jackson Johns while facing third-and-14.

The Falcons scored on their first possession of the second quarter. Hair made a short pass to Alec Wieberg, who ran it in for a 36-yard score with 8:51 left in the first half.

Hayden Lackman followed that with a 1-yard touchdown run four minutes later for the Falcons’ sixth touchdown of the first half.

Boonville answered with :23 remaining before halftime, as backup quarterback Evan Bishop rolled to his left and found Blake Griffin for a 15-yard touchdown pass. Ross Brackman added the extra point to make the score 42-13 at halftime.

In the second half, Hair threw a slant pass to Wieberg, who beat his defender in a foot race for a 63-yard touchdown reception midway through the third quarter.

Laughlin made a field goal for the second straight week, splitting the uprights from 24 yards with 5:24 to play in the game for the Falcons’ final points.

“He’s getting yards after contact,” LePage said of Lackman. “That’s something that wasn’t there earlier in the season. For being a freshman, he’s a big, physical young man and a load to bring down.”

The Falcons held the Pirates to 221 yards of offense: 137 yards receiving and 84 yards rushing.

Caton was 10-of-22 passing for 122 yards and added 16 carries for 43 yards. Caton rushed for 327 yards in two games last season against the Falcons.

“He’s a heck of a running quarterback,” LePage said. “To hold him to 43 yards rushing? I don’t know if that’s ever been done in his three years as a starter.”

Wieberg also had the only takeaway of the game, intercepting a fourth-down pass from Caton midway through the second quarter.

Boonville (3-2, 2-1 Tri-County) hosts California next Friday. The Pintos (1-4) are still looking for their first conference win after dropping a 54-30 decision Friday at home to School of the Osage.