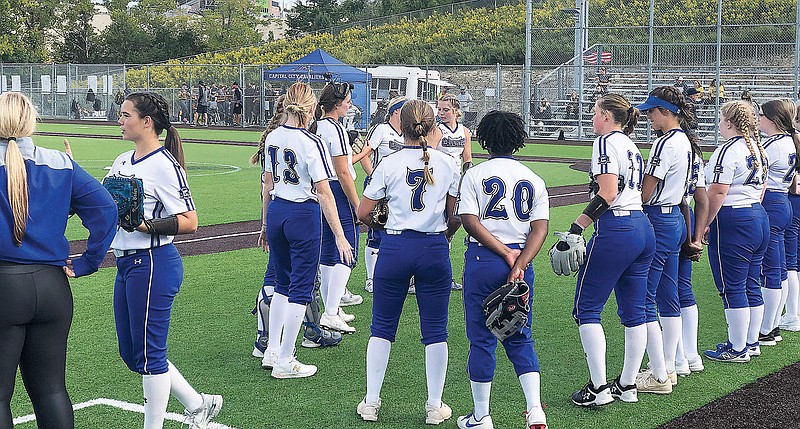 The Capital City Lady Cavaliers have a potent 1-2 punch in the circle.

For the second time this week, Jaiden Kausler proved to be a strong No. 2 for the Lady Cavaliers.

“If you want to make a run and make sure everyone is fresh and healthy, you have to have a strong No. 2 pitcher,” Capital City coach Brett Skinner said Thursday after Kausler and the Lady Cavaliers blanked the Sedalia Smith-Cotton Lady Tigers 10-0 in five innings in Central Missouri Activities Conference action at Capital City High School.

“We are definitely blessed.”

Kausler, a senior right-hander, tossed a two-hitter and walked one in getting the win in Monday’s 11-0 win in six innings against Eldon. On Thursday, Kausler again allowed two hits and walked one, this time in four innings in a run-rule win to improve to 6-1 on the season.

“She’s been huge for us,” Skinner said. “She worked hard all summer and it’s showing.

“I love her demeanor on the mound, she wants the ball.”

Kausler retired the first nine Lady Tigers she faced. By the time Smith-Cotton got a baserunner -- a leadoff walk in the fourth -- Capital City led 8-0.

The Lady Cavaliers scored twice with two outs in the bottom of the first. Maysen Karr singled to center before Emma Stieferman hit an infield single. Karr moved to third on the play when the throw to first was high.

Faith Karr pounded a shot to right-center that one-hopped off the fence to make it 2-0.

After going down in order in the second, Capital City sent 11 to the plate in a six-run third.

The Lady Cavaliers got two-run doubles from Lydia Coulson and Annie Spratt in the inning, while Stieferman and Faith Karr had RBI singles.

“We have the potential to be a very potent offense,” Skinner said.

The outburst came after Capital City was blanked 1-0 on Wednesday by Bowling Green.

“I know the girls were upset, but our focus today was Smith-Cotton,” Skinner said. “Our approach at the plate was we weren’t getting ourselves out.”

Coulson had an RBI double in the fourth to score Maysen Karr, who led off the inning with a double, to make it 9-0.

After Coulson came on in relief to strike out the side in the top of the fifth, the game ended in the bottom of the inning.

Spratt led off with a single and advanced to second on an error on the play. Danijah Fluellen followed with a single to put runners at the corners. After a groundout, McKenna Schwarzer singled to right to score Spratt.

Capital City finished with 14 hits in the game. Maysen Karr, Stieferman, Faith Karr, Coulson and Spratt all had two hits.

“She’s always aggressive early in the counts, to see her have the patience is going to make her a better hitter,” Skinner said. “Now they are going to have to pitch to her and if they do that, she’s going to hit it.”