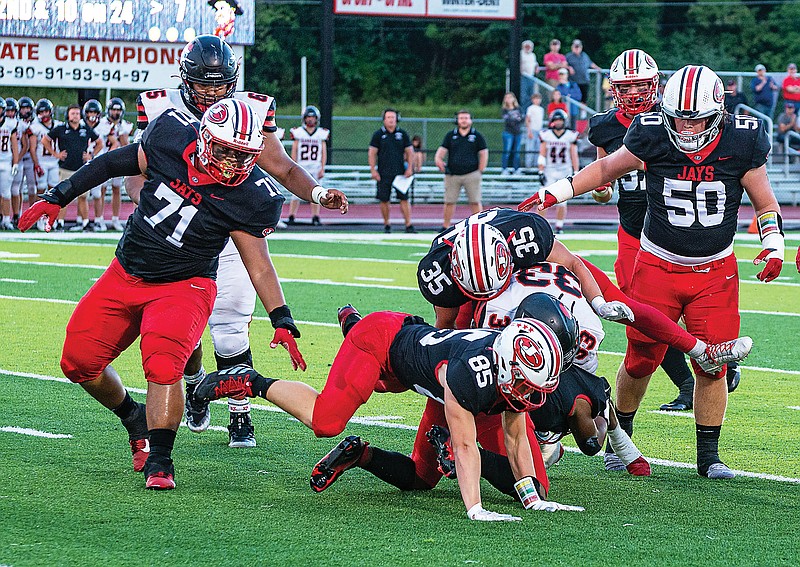 Jefferson City’s Ethan Garnett (35) gets the assist on the tackle of Hannibal’s Markahl Humphrey during a game earlier this month at Adkins Stadium. (Ken Barnes/News Tribune)

The Jefferson City Jays have a big game tonight at Adkins Stadium as the Capital City Cavaliers will be on the opposite sideline.

Despite all the surrounding noise coming into the game, the team on the other sideline is not a worry to the Jays.

“It truly is just another week for us,” Jefferson City coach Damon Wells said. “I’ve heard people mention rivalries and to me that doesn’t exist, that’s a figment of the imagination. Further, if we did have a rival, we would decide who the rival is, not anybody else.”

The Jays have won the first two matchups between the schools by scores of 36-0 and 42-7.

This one feels a little different, as the Cavaliers are in the midst of putting together their best season in the early history of the program, coming into tonight with a 3-1 record, the only loss coming in overtime on the road against Rock Bridge a week ago.

Tonight has the makings of an extremely physical football game, as each team will try to impose its will early in the game.

“To play defense you better be physical, you better be sound with your alignment and your technique and you better tackle,” Wells said. “Everybody is going to come in with a philosophy and a style of offense. You can’t stop any of them if you are not going to be physical and tackle.”

Jefferson City will have its hands full with the Cavaliers’ split-veer offense that has really found its stride this season, led by running backs Hurley Jacobs and Jaylan Thomas.

Stopping Jacobs and Thomas will be no easy task as the pair have combined to rack up 1,189 rushing yards and 13 touchdowns through the first four weeks.

“The beautiful thing about what they do, and the biggest compliment to their coordinator, is it can be hard to get kids to embrace that style of offense,” Wells said. “Their kids absolutely seemed to have embraced the fact that we are going to run the football and run it right at you, that’s the way it goes. Periodically they will spin it out there a little bit, and we know that.

“We have implemented a couple of unique things in practice to make sure our kids don’t forget that.”

An area the Jays’ defense will be looking to take advantage of is the turnovers category.

Capital City has put the ball on the ground 23 times so far this season and has lost 10 fumbles, including four last week that allowed Rock Bridge’s come-from-behind 35-28 victory. Jefferson City knows turnovers will be a big factor tonight.

“It has nothing to do with them, one of our goals is to cause turnovers every single week,” Wells said. “That’s not something we have done a great job with yet. … We are still not even halfway through with our season. That’s definitely an area we need to grow in and that’s a point of emphasis.

“With the law of averages and assuming everything equals out, we have a lot of turnovers coming our way.”

The good thing for the Jays is they can run the football pretty effectively, too.

Jefferson City has used its four running backs a lot, plus quarterback Jacob Wilson, in the ground game. Rodney Wilson, Ethan Garnett, Zane Wings and Kantrell Jordan have each had double-digit carries in at least one game this year.

Each back is used in different ways. Wells knows their strengths and weaknesses and plays into that.

“I think it is our job to try and put kids in positions to be successful,” Wells said. “Everyone has a skill set so that is what we spend our time doing, trying to make sure they’re in the very best positions and best opportunity to try and use their skill set and maximize what we are trying to do.”

The Jays will be looking to attack the Cavaliers’ 4-3 defense tonight. Although, they should expect Capital City to sneak more defenders into the box to try to slow down Jefferson City’s abundance of running backs.

“Their coordinators do a really nice job of preparing their kids,” Wells said. “They are sound in their schemes, so we are going to have to get creative because we don’t have an abundance of Division I athletes running through the door. But at the same time, we don’t want to get too creative because it goes back to the physicality part of the game.

“We aren’t going to change our DNA to try and win a football game.”

Jefferson City will look to take items it learned from last week’s 42-27 win against Sedalia Smith-Cotton in its Homecoming game and build on it for another game that comes with lots of distractions.

“Winning football games is hard and something you have to learn to do,” Wells said. “Hopefully last week, playing a close game in front of a lot of people and a Homecoming crowd, the fact we were able to separate is hopefully a sign of our growth.”

If the Jays are going to come out on the right side, they know they need to force turnovers, stay ahead of the sticks and impose their will while also not wearing themselves out too early in the game.

“We need to win the turnover battle in a big way,” Wells said. “We also can’t go backwards. I don’t think either offense is necessarily built for third-and-16. I think people need to stay in operational down and distances. Physicality matters. I am sure that the first two minutes of the game might not be the same as the last two. So I think whoever has staying power and is able to demonstrate a level of depth will have an advantage as well.”

The matchup will start tonight at Adkins Stadium at 7 p.m., with Capital City designated as the home team.