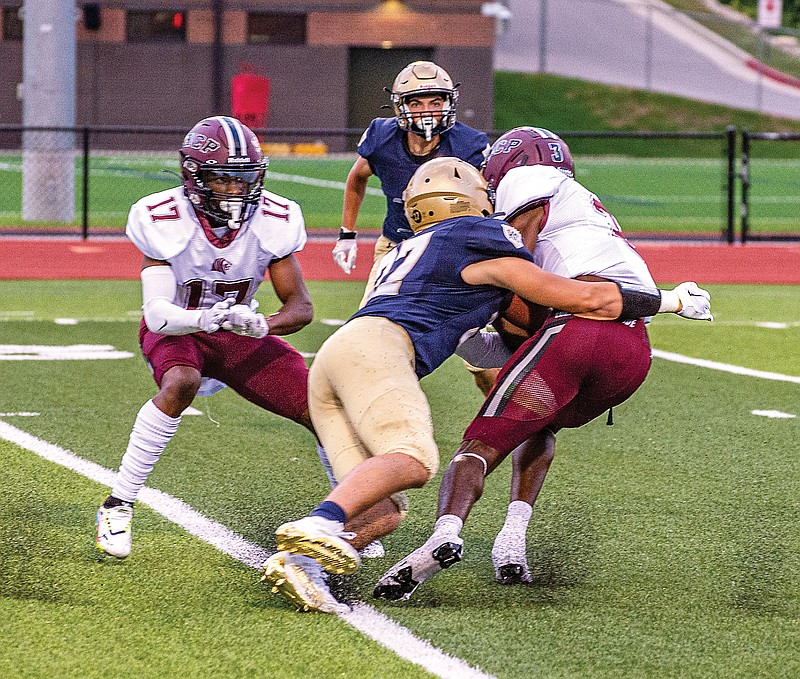 It wasn’t a week to go back to the drawing board.

“Anytime you suffer a loss at any point in the season, I think the kids are naturally down,” Helias coach Chris Hentges said as the Crusaders prepared to take on Rock Bridge in a Central Missouri Activities Conference and Homecoming contest tonight at Ray Hentges Stadium.

“You want them to be mad about a loss, I’d be more concerned if they weren’t.”

Helias dropped its first game of the season last Friday night, a 40-14 decision to new Class 3 No. 1 Cardinal Ritter. The game was tied at 7 at the half before the Lions pulled away in the final two quarters.

Hentges believes the players put the loss behind them early in the week.

This game will have an impact. Helias (3-1, 2-0) is the two-time defending CMAC champion and has won 14 consecutive conference games.

“You can see the progress from Week 1 to Week 5, you can see them getting better each and every week,” Hentges said.

Matt Perkins is in his first year as head coach at Rock Bridge, coming from West Plains.

Helias defeated West Plains 36-30 in the Class 4 quarterfinals in 2020 on its way to a state title.

“He’s installed his offense full-tilt,” Hentges said. “And he’s got a lot of talented kids at Rock Bridge running it.”

“Tall, rangy, he can run even though he’s more of a passer than a runner,” Hentges said. “He stands tall in the pocket and delivers a very good ball.”

“He reminds you of Chase Patton from a long time ago,” Hentges said. “He can stand back there and deliver the ball with authority.”

“We think we have a pretty good feel for what they are going to do offensively,” Hentges said. “Now it’s a matter of us being able to slow them down.”

Defensively, Rock Bridge is allowing an average of 22.3 points per game.

The Bruins operate out of a 4-3 front.

“It looks very similar to what they ran against us two years ago,” Hentges said.

The Crusaders have gone back to the film from the 2020 quarterfinals in their scouting this week.

“That’s the most consistent look we’re going to get against the offense we run,” Hentges said.

The Helias offense will look to protect quarterback Drew Miller after giving up its first two sacks of the season, along with multiple pressures, last week.

“We’re going to try to keep Drew clean and comfortable back there,” Hentges said.

Helias punted as many times against Cardinal Ritter -- five -- as it had in the first three games combined. The Helias punt coverage squad has been strong this season, giving up four net yards in returns through four games.

“Our coverage has been good,” Hentges said.

“That was a very good come-from-behind victory,” Hentges said. “Capital City had them on the ropes, but Rock Bridge did what it needed to do in the second half to tie it and winning it in overtime.”

Hentges believes Helias, which fell three spots to No. 9 in this week’s Class 5 Missouri Media Rankings, won’t suffer from a hangover from last week

Notes: It has been a series of streaks between the Crusaders and the Bruins. Helias won three straight from 2013-15, Rock Bridge won the three meetings in 2016-18 and Helias has captured the last three. The Crusaders won 34-13 last year in Columbia. … Kaiser is a cousin of former Missouri quarterback Drew Lock. … Helias junior linebacker Logan Montoya led the Crusaders with 11 total tackles against Cardinal Ritter. He has a team-high 38 tackles this season. Trevor Kolb paces the Crusaders with three sacks. … Rock Bridge opened the season with a 34-17 loss at Park Hill South. The Bruins then defeated Sedalia Smith-Cotton (49-0) on the road before posting home wins against Jefferson City (38-27) and Capital City. … Helias has led or been tied after the first quarter in all four games this season.