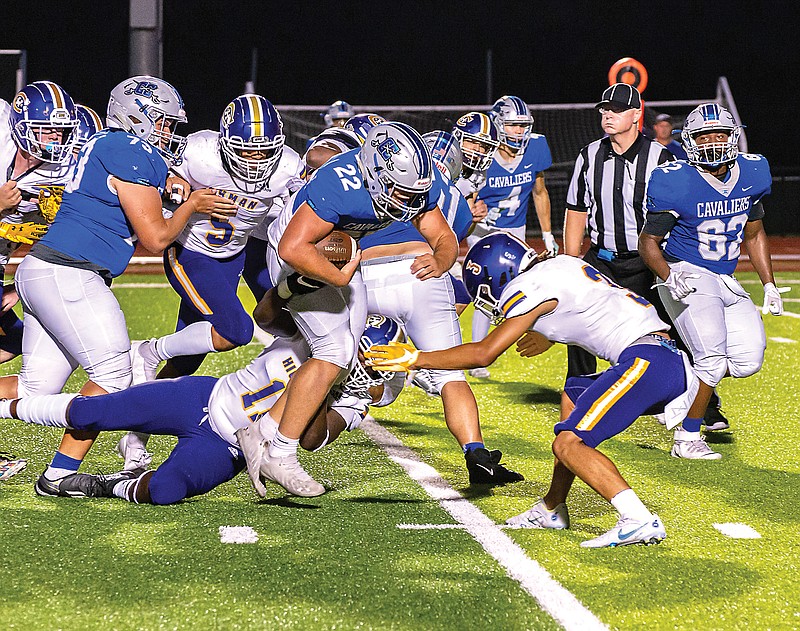 Capital City running back Hurley Jacobs fights his way through the Hickman defense during a game earlier this month at Adkins Stadium. (Ken Barnes/News Tribune)

After a 3-1 start, the team’s best in school history, the Capital City Cavaliers are set to try for their first win against another Central Missouri Activities Conference opponent they lost to in their first two seasons.

Although Adkins Stadium has been the home of the Jays for much longer, tonight the Cavaliers will be on the home sideline.

Capital City is looking to rebound from its first loss, a 35-28 overtime defeat last Friday to the Rock Bridge Bruins in Columbia.

The Cavaliers jumped ahead 21-3, then the Bruins scored 32 of the final 39 points to storm back, scoring the tying touchdown and 2-point conversion with less than 20 seconds left in regulation.

“We felt like we played good enough to win, so we’re not really focusing on that loss,” Collier said. “We let an opportunity slip away, but that’s more of a learning experience for us. We know we need to focus on finishing games. We know we can give ourselves a chance to win, we just need to learn to finish.”

The Cavaliers led the majority of the game on the strength of 316 rushing yards, including 180 yards and two touchdowns from freshman Jaylan Thomas. Thomas now has 488 yards and six touchdowns on the season.

But four lost fumbles, including one with under two minutes to play that set up the Bruins’ game-tying score, sank the Cavaliers.

Fumbles have been a problem for the Cavaliers in each game this season, putting the ball on the ground seven, five and six times in the first three weeks, respectively, but last week was the most times they lost possession on loose balls.

“Ball security is what we continue to really focus on,” Collier said.

The Cavaliers’ offense has produced 32 points per game, while the defense has allowed 26.8 points per matchup.

Capital City’s offense will go against a Jefferson City defense that has allowed 36.8 points per game including 52- and 48-point performances in Weeks 2 and 3, respectively.

Defensively, the Cavaliers will face a Jays’ offense that has scored 34.5 points per game, including 41- and 42-point performances in Weeks 1 and 4, respectively. The Jays’ defense has struggled against the run this season, allowing at least 200 rushing yards in every game on the way to a 280.3 yards-per-game average on the ground.

Jefferson City’s wing-T offense has average 340 yards on the ground. Collier said the change from Rock Bridge’s spread to the Jays’ wing-T isn’t as much of an adjustment as he expected.

“We thought Rock Bridge was just a spread-out wing-T,” Collier said. “They ran a lot of things a wing-T would run. This week, it’s just more condensed and traditional in a sense. … We’re pretty much playing the same animal, just not so much empty.”

Rodney Wilson has led the Jays in rushing the past three games, averaging 133.3 yards in those three performances. He has 34 rushes for 469 yards this season to go with six touchdowns. Kantrell Jordan has come on strong for the Jays in the past couple of weeks with performances of 14-for-60 and 11-for-90 on the ground, while Zane Wings has averaged 57.8 yards rushing and quarterback Jacob Wilson has 212 rushing yards and six touchdowns this season.

The Jays are coming off a 42-27 win against the Sedalia Smith-Cotton Tigers, where the Jays ran for 347 yards.

“We’re just really focused on football, this is a game you really want to win for in-town bragging rights and everything you want about an in-town game,” Collier said. “But how you win those games is you focus on football, then think about all that other stuff afterwards. We’re just gonna do what we do and play together. If we do that, we think we can be successful against anybody.”

Capital City is hoping to have starting center Hayden Miller back after he missed most of the Cavaliers’ Week 3 game against Hickman and all of last week with a hurt right ankle. If Miller is unable to play once again, Matthew Wiegand will likely snap the ball to Hayden Carroll once again.

“We’re gonna compete,” Collier said. “We don’t care who it is, where we’re at, we’re going to compete. That’s what I love about our guys.”