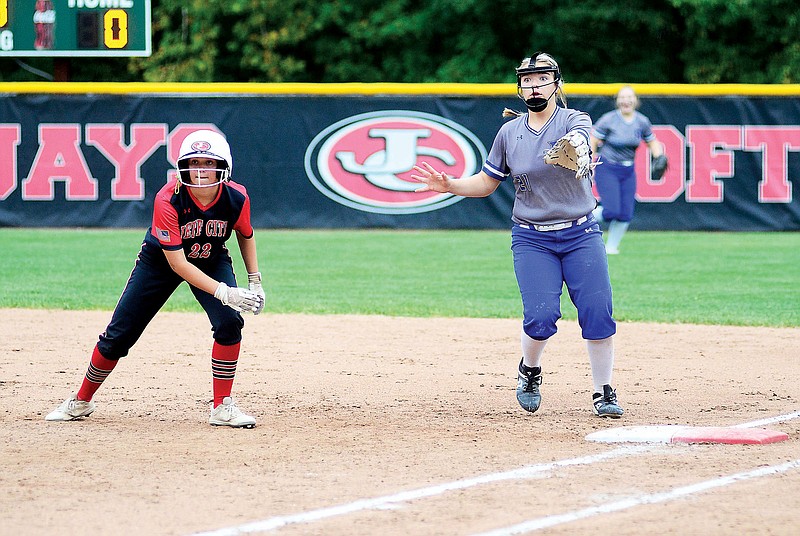 The Russellville Lady Indians got the bats going early and often Thursday night en route to a 9-2 win against the Jefferson City Lady Jays on Senior Night at Vogel Field.

The Lady Indians started the game with three straight doubles and scored four runs in the first inning, making a statement early in the first meeting between the two sides in quite some time.

“I think that any time you are in our situation, a smaller school playing against a bigger school, especially in-county school, that everybody looks up to the success they’ve had and the type of program they have,” Russellville coach Lucas Branson said. “We took control of the game right in the first inning and established the momentum for us right off the bat. I think that allowed our girls to kind of relax in that setting.”

Avrey Reynolds settled down in the circle for Jefferson City following the first inning, throwing two zeros on the scoreboard to allow time for her team to get back into the game.

The Lady Jays did just that in the bottom of the third inning, scoring two runs on a double into shallow left field by Elliot O’Donnell to plate Kaylee Redcay and Kyra Meyer, who was pinch-running for Kenzie Moore after she singled to start the frame.

Jefferson City could have added another run, but Cali Coombs made a sliding catch in center field to rob Amaya Ford of an RBI single to end the inning.

Russellville used the momentum and answered immediately with three runs in the top of the fourth.

Karleigh Grayson singled to start the inning. Audra White followed by reaching on an error and Coombs drove in Grayson with a single up the middle. Josie Stewart added on with a two-RBI single to right field, two of her four on the night, to score White and Coombs to increase the lead to 7-2.

“That is truly a huge emphasis for us offensively,” Branson said on taking advantage of mistakes. “We have got some girls throughout the lineup that can take some really good at-bats, but we feel like one of our potential areas of strengths is what our offense can do with the aggressiveness running the bases.”

The Lady Jays had a big opportunity to close the gap and get back into the game in the bottom half, as Emma Friedman, Summer Branch and Jaela Nickerson all singled to start the inning and loaded the bases with no outs.

After a mound visit, Lady Indians pitcher Cambell Backues got out of the jam with no damage after a pop out, strikeout and fielder’s choice.

“We had opportunities to score and we just didn’t take care of business,” Jefferson City coach Zac Miller said.

Rusellville was able to take advantage of another miscue from Jefferson City in the field in the sixth, putting up two runs and pushing the lead to 9-2.

The Lady Jays made three errors on the night that led to two unearned runs.

“I can’t take anything away from them, they hit the ball hard numerous times,” Miller said. “They were able to capitalize on a bobble here, bobble there or us not being able to knock the ball down. They did a great job of taking advantage of those bobbles.”

Backues retired the final 12 Jefferson City batters she faced to close out her complete game. She allowed two runs on eight hits with three strikeouts and no walks.

“She’s really good,” Branson said. “It’s just a matter of her trusting herself, trusting the pitches she’s going to throw and having confidence. She’s not overpowering, but spins it really well and keeps the ball down and out of hitters’ hot zones.

“She pitched a no-hitter last week and to back that performance up today is great for her.”

Stewart led the way for Russellville (13-4) with her 3-for-4 night and four RBI while Coombs added three hits, two RBI and three runs scored.

Seven different hitters for Jefferson City (8-12) recorded a hit. O’Donnell led the Lady Jays with her 2-for-3 performance while driving in the two runs.

Jefferson City honored Reynolds, Moore, Alexa O’Donnell and Friedman after the game for their Senior Night. Miller will miss their leadership the most.

“Each one of them are just great teammates,” he said. “No matter what the circumstances were, all four of them worked together really well. They had really great chemistry together. They are great kids, great teammates. I couldn’t ask for much more.”

Russellville will look to keep its momentum going Saturday when it starts the AA Russellville/Eugene Tournament. The Lady Indians will play Waynesville at 8:30 a.m. in Russellville.

Jefferson City will look to get back on track Monday when it travels to play Lutheran: St. Charles at 4:15 p.m.