Tom Kim a fresh face for Internationals in Presidents Cup 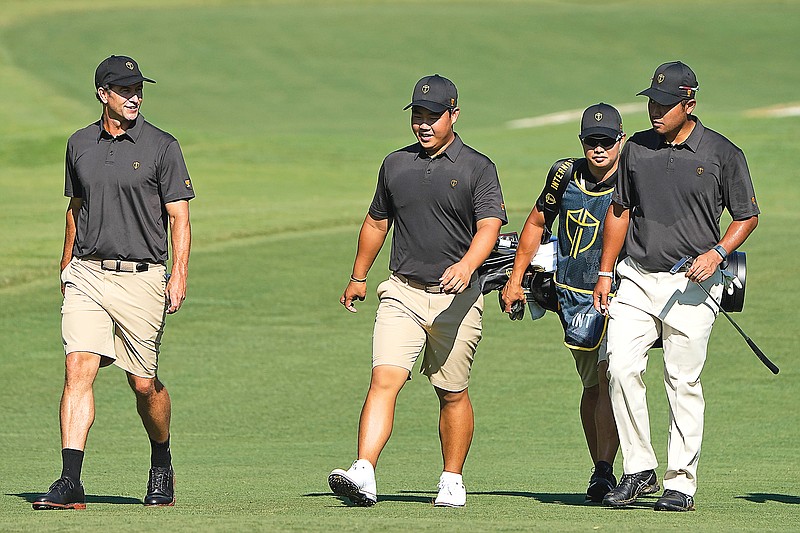 (From left) Adam Scott, Tom Kim and Hideki Matsuyama walk up the fifth fairway during Tuesday’s practice for the Presidents Cup at the Quail Hollow Club in Charlotte, N.C. (Associated Press)

CHARLOTTE, N.C. -- Tom Kim can be excused for his mistake Wednesday. The Presidents Cup is new for the 20-year-old South Korean, just like it is for seven other players on the International team that face a daunting task at Quail Hollow.

Only this was more a math mistake than a rookie mistake.

“We’re on 12 today, and he makes a mistake doing simple math there,” said Camilo Villegas of Colombia, one of the assistant captains for the International team. “So I look at the kid and said, ‘Tom, is that college math?’ He looks at me and goes, ‘Dude, I didn’t even graduate from high school.’”

Kim ticks about every box when it comes to the fresh faces at this Presidents Cup, which starts today, only looks are deceiving.

Yes, at age 20 he is the youngest player to play for the International team since Ryo Ishikawa of Japan was 18 in 2009 at Harding Park. Kim also has won more tournaments this year than anyone on his team. And he brings as much personality as he does game.

He likes to laugh and talk trash. The team has players from seven countries who speak four languages. That’s not a problem. Kim speaks three languages.

Captain Trevor Immelman was asked earlier in the week who would be his starting five if they were playing basketball. He had Kim penciled in as his point guard because of his size and his “fast mouth.”

Kim’s given name is Joohyung. As a boy, he was so smitten with Thomas the Tank Engine that he wanted that for his name, and eventually it was shortened to Tom.

Born in South Korea, his family moved to Australia when he was a child. He picked up golf at age 6 and when the cost of living became too high, his parents decided to move to the Philippines. Kim’s golf thrived even more.

As for the high school math? As he said in a first-person account for Golf Digest, “College scouts weren’t coming after me, and my goal was always to turn pro, so I decided to do it early.” He was 15.

Kim worked his way through developmental tours in Asia. His path was slowed by the COVID-19 pandemic, and he spent the last two years on the Korean tour, winning twice.

He ended last year at No. 131 in the world, and then quickly made himself known. He won the Singapore International to start the year (and was runner-up in the Singapore Open a week later). He received a sponsor exemption to the Scottish Open -- Korea-based Genesis is the title sponsor -- and finished third.

That sent him on his way toward a PGA Tour card and he nailed that a few weeks later by winning the Wyndham Championship, where he started the tournament with a quadruple-bogey 8.

There is very little dull about Thomas the Tank.

Kim was invited to the Saudi International in February and shared a table at the press conference with LIV Golf CEO Greg Norman to talk about Saudi money going to the Asian Tour. But the kid left little doubt where he always wanted to play.

He was overjoyed at getting his PGA Tour card, and he’s even more amped up about the Presidents Cup, a chance to hand the mighty American team its first loss since 1998, before Kim was even born.

“I’ve dreamt of this as a kid. For me to be able to represent the international team is an absolute honor. So I’m super pumped,” he said. “I can’t wait for Thursday to come. I’ve always dreamt of doing crazy fist bumps because it’s match play. So I’m really looking forward to it.”

He won’t have to wait long. Kim is playing with K.H. Lee of South Korea in the third of five matches Thursday in the opening session of fourballs. They face two-time major champion Collin Morikawa and big-hitting Cameron Young, five times a runner-up in his rookie season on the PGA Tour.

The Americans have all 12 players ranked among the top 25 in the world, and they are going for their ninth consecutive victory, playing before a home crowd at Quail Hollow. They are heavily favored.

Kim is among four South Koreans on the team, a record for a golf nation more known for the major champions and No. 1 players the women have produced. Kim joins Lee, Sungjae Im and Siwoo Kim. International team assistant K.J. Choi could not be prouder.

Choi is intrigued by Kim, describing him with terms like “very fun” and “cute” and “many talking.”

“First 15 years, not much coming for the younger players, the Koreans. But now more than seven, nine, 10,” Choi said. “I’m starting in America 30 years old, it’s very difficult English. But younger guy is already out of the country and experienced in English. That’s why the more friendship, comfortable in the play, everything.”

All that’s left is to see how it translate. Tom Kim is full of laughter and void of fear. Thomas the Tank is on the fast track, and the stage has never been bigger for him.