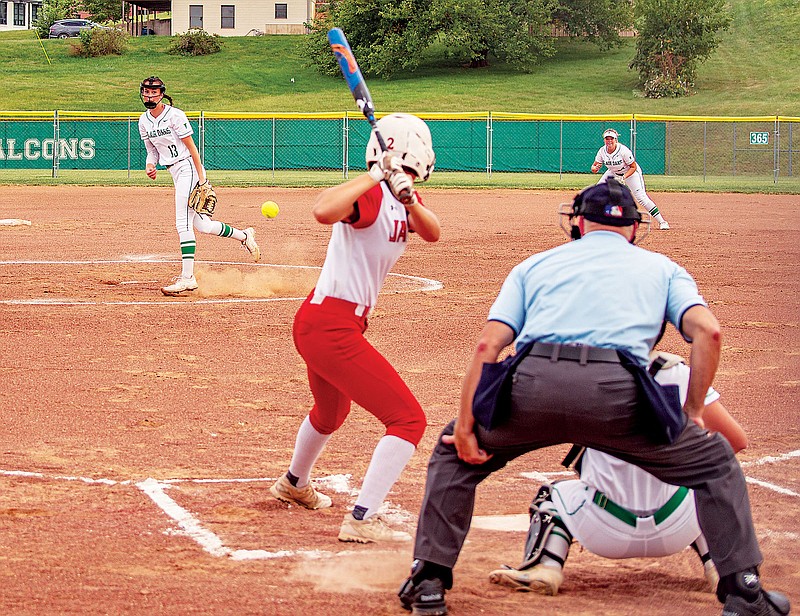 WARDSVILLE -- There was a power surge in the bottom of the sixth inning Wednesday night at the Falcon Athletic Complex.

Emma Wolken, Kally Bruce and Taylor Groner all homered in the inning, powering the Blair Oaks Lady Falcons to a 10-0 victory in six innings against the Jefferson City Lady Jays.

“There was a lot of power and it was a fun night,” Blair Oaks coach Sharon Buschjost said.

Olivia Moyer blooped a single into left field to start the inning and advanced to second on a fielding error, then Baley Rackers reached on a bunt single to put runners at the corners.

Wolken drove both of them home, hitting a 1-0 pitch over the left-field fence to extend the Lady Falcons’ lead to 8-0.

For Wolken, one of six players recognized after the game on Senior Night, it was just her second career home run.

“There are times where I feel like she can be a big RBI person for us,” Buschjost said. “She has shown more power every year.”

Bruce, the next batter, lined a 2-1 pitch to the opposite field for a solo home run over the right-field fence to make the score 9-0. Three innings earlier, Bruce hit a two-run triple into the right-field corner.

“That puts her on a different level, if she continues to stay with that and go the opposite way,” Buschjost said of Bruce, who is tied with Kenzie Libbert for the team lead with four homers. “She has a lot of power, gap to gap.”

Two batters later, Groner -- also a senior -- swung at the first pitch she saw and smashed a no-doubter to left field for a walk-off solo home run, her first of the season.

“That was the longest one of the night,” Buschjost said. “She was just so relieved. I know she was frustrated with some at-bats, but you could just see on her face that there was something about that swing.”

Jefferson City, which entered the day on a three-game winning streak, got off on the right foot with a leadoff double by Kaylee Redcay to start the game.

“It was looking good there for a moment,” Jefferson City coach Zac Miller said.

Moyer, Blair Oaks’ senior pitcher, responded by retiring the next 14 batters she faced, striking out eight of them.

“They were looking to jump on us early in the game,” Buschjost said. “They got exactly what they wanted with their leadoff hitter. But that’s been Olivia Moyer for us. She’s been a shut-down pitcher when we need her to be.”

Moyer pitched a three-hit shutout, striking out 10 without yielding a walk. Seven of the eight remaining outs were pop-ups or flyouts.

Redcay had two of Jefferson City’s three hits, adding a single to left field in the sixth. Jaela Nickerson blooped a single to center field in the fifth to end Moyer’s consecutive outs streak.

“She had good approaches every at-bat she had,” Miller said of Redcay.

Blair Oaks had runners on third base in each of the first, second and fifth innings, but Jefferson City pitcher Avrey Reynolds worked out of a jam each time to post scoreless innings.

“She had a couple key strikeouts to end some of those innings,” Miller said. “And if they’re going to put the ball in play, hopefully we can get some weak contact and the defense can back her up.”

Reynolds struck out four and walked two in 5⅓ innings.

The Lady Falcons scored their first five runs in the third inning on six hits.

Belle Boessen tripled into the right-center field gap, scoring Braun to make it a five-run lead.

“That’s kind of how the season has been so far,” Buschjost said about the big inning. “We can’t get real picky about when the runs come.”

Blair Oaks’ sixth senior, Julie Braun, got an opportunity to catch Moyer for a few innings in the win and caught a foul pop-up.

“Senior Night, the night is all about them,” Buschjost said. “To see her behind the plate for three innings, it was a lot of fun and she did a great job.”

Wolken had three of Blair Oaks’ 14 hits in the win, while Rackers, Bruce, Groner and Kenadi Braun each had two hits. Wolken and Bruce each drove in three runs.

Blair Oaks (11-5), which has won five straight games, plays Lafayette County and Harrison on Friday in pool play of the UCM Tournament in Warrensburg.

“We’ve got to get back at it, put the cleats on and go play,” Miller said.

Avery Hagner had two hits, including a triple, and four RBI for the Lady Falcons, while Haley Klebba had two doubles, a single and three RBI. Klebba was also the winning pitcher, striking out six and walking two.

Kyra Meyer had a single and an RBI for Jefferson City’s JV team (5-6).