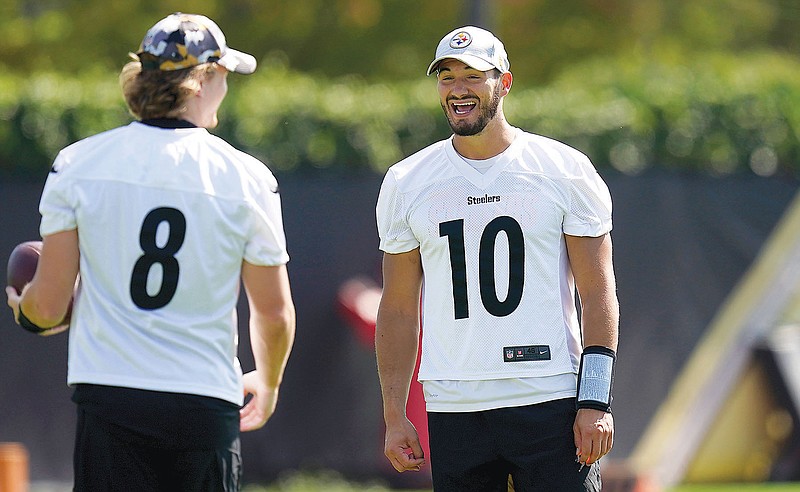 CLEVELAND -- For the first time since 2004, Ben Roethlisberger isn’t part of the Steelers-Browns rivalry, a matchup the Ohio-born-and-bred quarterback dominated for 18 seasons and will now watch with everyone else.

Tonight, Mitch Trubisky makes his debut in one of the NFL’s fiercest feuds.

Struggling to connect with Pittsburgh’s receivers, Trubisky, chosen as the starter in training camp over rookie quarterback-in-waiting Kenny Pickens, may look to take some deep shots downfield when the Steelers (1-1) visit a Browns team still reeling from an epic collapse in their home opener Sunday.

Trubisky is ranked 32nd in yards per attempt, one of several troubling stats for him after just two games and perhaps a reflection on the 28-year-old being more of a game manager than game changer.

Still, Trubisky, who grew up in Northeast Ohio but was never particularly keen on the Browns (1-1), is confident he’ll soon begin hooking up with Pittsburgh’s talented, but to this point underused, receivers.

On the flip side, the Browns have been out of position.

Of the many unforgivable sins -- clock mismanagement, a missed PAT, not recovering an onside kick among them -- committed by Cleveland in the final 1:55 of its 31-30 loss to the New York Jets, letting wide receiver Corey Davis run uncovered to catch a 66-yard TD pass with 1:22 left, was at the top of the what-not-to-do list.

Either Pro Bowl cornerback Denzel Ward or safety Grant Delpit blew their assignment, but neither was willing to put their name on a play that can’t happen.

Making matters worse, the Browns did the same exact thing a week earlier at Carolina, giving up a couple of long passes, including a 75-yard TD to aid the Panthers’ fourth-quarter rally.

“I’m not going to get into the responsibilities and those type of things because I just don’t see that as productive,” Browns coach Kevin Stefanski said this week when pressed about the gaffes. “The bottom line is that should never happen. We have to be able to defend the pass in those obvious passing situations.”

The Browns insist they’ll clean things up, but until they do, teams will look to exploit an obvious weakness.

The Browns’ pass rush won’t be as potent with defensive end Jadveon Clowney out after spraining his ankle in the second half against New York. There’s no timetable on the edge rusher’s return.

Clowney’s absence made things even tougher on All-Pro Myles Garrett, who was consistently double-teamed by the Jets in the game’s late stages. Garrett, who is one sack from becoming Cleveland’s career leader, missed practice Tuesday with a neck issue but will play.

The Steelers are very familiar with Garrett’s ability to ruin a play and need to keep him off Trubisky.

The Browns activated end Isaac Rochell from the practice squad for added depth and rookies Alex Wright, Isaiah Thomas and Perrion Winfrey (out due to discipline last week) could get more playing time.

The Steelers selected 6-foot-3 wide receiver George Pickens in the second round to essentially replace JuJu Smith-Schuster, who left in free agency. Pickens looked every bit the downfield playmaker Pittsburgh needs during the preseason.

Through two games, however, he’s been an afterthought with two catches for 23 yards.

Pickens is trying to stay patient. It’s a long season and while he thinks there’s a chance to get going against a Cleveland secondary that gave up four touchdown passes Sunday to Joe Flacco, he’s not getting ahead of himself.

“I’m thinking it’s like a new video game, you know? I’m like, ′Ooh, yeah, (going deep) is going to work,” Pickens said. ” But (the veterans here) played (the Browns) before, you know … their guys are savvy. They’re going to try to mess (us) up.”

Conklin’s return makes the Browns’ potent ground game (401 yards in two games) more dangerous. Although he was close to playing in the first two games, the Browns chose to make him inactive. Now he’ll have extra time with the next game not until Oct. 2.

Steelers defensive tackle Larry Ogunjobi spent the first four years of his career in Cleveland from 2017-20, memorably shoving Pittsburgh quarterback (now teammate) Mason Rudolph in the back during a melee late in a bruising Thursday night victory against the Steelers in 2019.

“Yeah, I don’t expect anything like that to happen,” Ogunjobi said with a wry smile. “I am just excited for the next opportunity and next challenge.”

Ogunjobi signed a one-year deal with the Steelers after a pact with the Chicago Bears was voided because of a foot injury he suffered in the playoffs last winter playing for Cincinnati. The 28-year-old is part of Pittsburgh’s plan to fortify a run defense that finished last in the league in 2021, though the Steelers were successful against the Browns, holding them under 100 yards in each of the two meetings on their way to sweeping the season series.

There has been modest improvement so far, though New England was able to burn the final 6:33 of the fourth quarter Sunday to seal a victory while working almost exclusively on the ground.