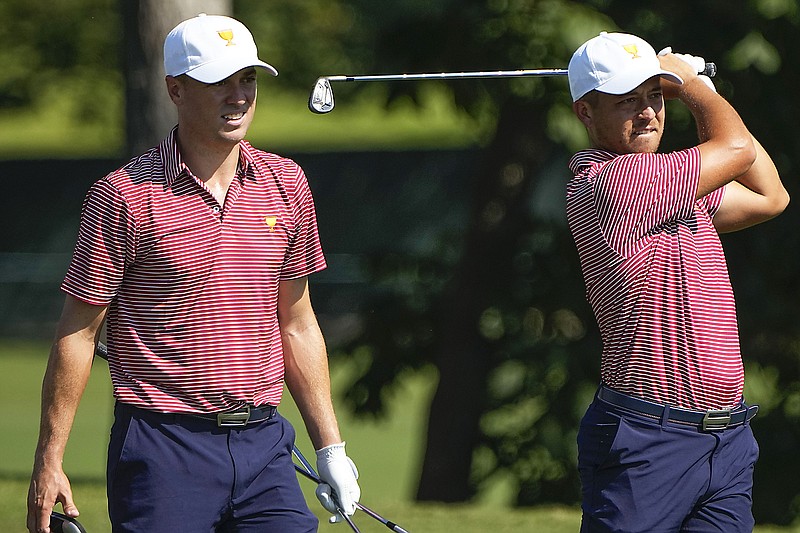 Xander Schauffele follows his ball as Justin Thomas looks on from the 13th tee during Tuesday's practice for the Presidents Cup at the Quail Hollow Club in Charlotte, N.C. (Associated Press)

CHARLOTTE, N.C. -- The great disruption in golf is doing no favors to the Presidents Cup, which already struggles for an identity as a global competition owned and operated by one tour.

But look at it another way.

Without disruption, there probably wouldn’t even be a Presidents Cup.

The split caused by the arrival of Saudi-backed LIV Golf doesn’t have a lot in common with the PGA Tour breaking away from the PGA of America more than 50 years ago, except lawyers were involved and feelings were hurt in both.

The short version of the rift from the late 1960s was tour professionals wanting more control -- especially as corporate money and television began to arrive -- instead of the PGA of America having veto power and catering to club pros.

It became so contentious that Jack Nicklaus wrote an op-ed piece in Sports Illustrated in September 1968 -- Roger Staubach was on the cover that week -- ripping into Leo Fraser, the PGA of America secretary, and accusing him of misleading the public.

“Fraser did spell my name correctly -- Jack Nicklaus. He even had my age right -- 28,” Nicklaus wrote. “The rest of his cutting statement, though, was a personal assault.”

Imagine if Tiger Woods wrote something like that today.

Both sides finally reached an accord, leading to the creation of the Tournament Players Division for tour players, and that eventually became the PGA Tour.

But there were properties to divide. The tour players took the World Series of Golf, at the time a popular 36-hole event for major champions at Firestone Country Club in Ohio. The PGA of America took the Ryder Cup, which back then was so one-sided that it lost money and struggled to sell tickets in the U.S.

If the players had taken the Ryder Cup and it became the money-making showcase it is now, would the tour even have bothered inventing the Presidents Cup?

Don’t lose sight of the money, because golf revolved around it long before Greg Norman began offering outrageous sums in signing fees and prize money (Pat Perez has made $3.7 million in four events -- his best year on the PGA Tour was $2,962,641 across 31 tournaments in 2018).

The Presidents Cup is a huge corporate sell at Quail Hollow.

But it’s really just another week of seeing the best players outside Europe in the exciting format of team matches, with 12 of them competing under a flag dreamed up by someone in marketing.

That much is clear by who’s not playing this week.

British Open champion Cameron Smith of Australia was leading the International standings a month ago. Now he’s No. 4 on the LIV Golf money list after two events. He’s not at Quail Hollow because the PGA Tour suspended him.

Louis Oosthuizen of South Africa resigned his PGA Tour membership to join LIV Golf. He was so good in this competition that he compiled a winning record (9-6-4) despite playing on four losing teams. He’s not here, either.

The PGA Tour’s own tournament regulations say to be eligible for the International team, a player must compete in at least 15 events that award world ranking points during the qualification period. Oosthuizen played in 18.

It says nothing about being a PGA Tour member.

But the PGA Tour considers this an “approved” tournament, and it considers Oosthuizen in violation of its regulations from when he signed up for LIV Golf without a release.

“There’s no rule that says I need to be a PGA Tour member to play the Presidents Cup, especially as an International team player,” Oosthuizen told Golf.com. “I made my decision where I am playing golf. But I didn’t do anything wrong while I was a PGA Tour member.”

This might have been a chance for the Presidents Cup to look more like a true competition between nations instead of a match put together by the PGA Tour.

Instead, the PGA Tour made it clear it’s us or them, whether it’s the FedEx Cup or the Presidents Cup. Commissioner Jay Monahan said in a memo to players in June after the first batch of defections that those players are “no longer eligible to participate in PGA Tour tournament play, including the Presidents Cup.”

The Presidents Cup will be fine no matter who’s playing. It’s usually good entertainment and can deliver its share of big moments. But what makes the Ryder Cup special is the underlying competition between the PGA Tour and the European tour, no matter how many Europeans choose Florida as their home base.

The PGA Tour has tried to give some measure of ownership to the International team, such as input on how the course should be set up for its home events and criteria for making the team.

Total ownership of the team? That’s what International captain Ernie Els wanted after a close loss in 2019 at Royal Melbourne.

“We need to be separate. That’s a long, long process. I don’t think it will happen very soon,” Els said. “The Ryder Cup works because the Europeans do their own thing and the U.S. do their own thing, you know, and it’s two groups that clash.”

True ownership, whomever or whatever that would be, comes with a cost. The PGA Tour finds the corporate support and foots the bills for everything -- staging, travel, clothes, marketing -- whether that’s at Quail Hollow or Royal Montreal.

And that ownership gives them authority to decide who plays no matter which team they might have represented.