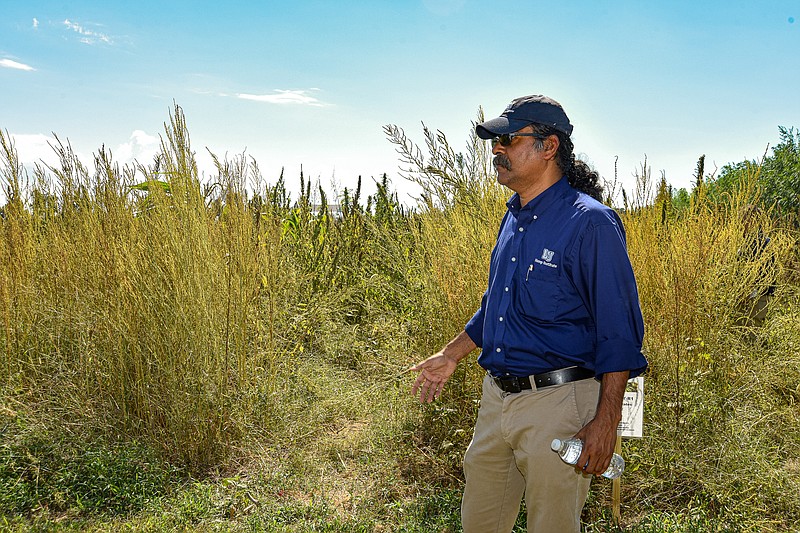 Julie Smith/News Tribune photo: Babu Valliyodan, assistant professor of plant molecular biology who is studying the growth and use of industrial hemp, explains the varieties growing at Lincoln University's Carver Farm on Sept. 21, 2022.

Research is thriving, farmers are interested and processing facilities are looking to expand. Lincoln's Hemp Institute, a national leader in industrial hemp research, is helping lead the way.

Babu Valliyodan, director of Lincoln's Hemp Institute, provided an update on research so far, which is primarily focused on determining what types of hemp grow best in Missouri and in different conditions. Research also involves developing crop management practices and standard operating procedures for farmers.

"We are strong with corn, we are strong with soybeans, but this would be an additional crop for the Missouri farmers," he said. "In five years, I'm sure that especially the fiber hemp will be more prominent. So that's a lot of excitement."

The institute was formed about three years ago, putting Missouri at the cutting edge of industry development. It operates out of Lincoln University Cooperative Extension and Research, part of the university's 1890 land grant designation.

Hemp is different from marijuana. Both plants are cannabis sativa, but hemp is grown for CBD, grain or fiber production, and marijuana is bred for THC production.

Lincoln President John Moseley said he hopes the research and education Lincoln is conducting can help clear up some of the misconceptions.

"I'm very excited about the research that Dr. Babu and his team are doing in the area of hemp," he said. "There are many misconceptions about hemp, and I think through research and just education we'll be able to better inform the public about the potential benefits of hemp becoming a cash crop for farmers throughout Missouri."

Valliyodan said it's clear industrial hemp is a growing market and more farmers are voicing interest.

Missouri farmers can grow hemp with a license from the Missouri Department of Agriculture. As of Sept. 9, 152 producers had active licenses from the state, according to the department.

"A lot of farmers are coming up, I can see," Valliyodan said. "This year, about eight or 10 farmers approached me, and different types. Some small farmers came to grow some cannabinoid CBD seedlings, and I told them, 'Find out the market first. Don't put all your money on that one because the CBD/CBG market is down this year.'"

Other farmers were interested in the fiber plants, he said, so Lincoln is working to form a co-op with some of the smaller farmers to lend them harvesting equipment.

Valliyodan said Missouri is the second largest producer of industrial hemp, second only to Kentucky, which is considered the industry pioneer. Missouri producers planted about 1,250 acres of hemp last year, Valliyodan said, and he's expecting more this year.

As farmers continue to take it up, a bottleneck lies in hemp processing -- turning the raw plant into fiber, oil and other products.

There is one hemp processing facility in Missouri and another three in the works, Valliyodan said, but they are all focused on fiber hemp. There's a need for more hemp oil and seed processing facilities, he said, because the oil can be used as vegetable oil or biodiesel efforts.

On the hemp fiber side, Midwest Natural Fiber is leading the state's industry with its lone Sikeston facility. The company processes about two tons of hemp per hour.

Midwest Natural Fiber CEO Patrick VanMeter said the company hopes to expand throughout the state as there are currently no large-scale hemp processing facilities in Missouri. A large-scale facility would allow the company to process anywhere between five to ten tons of hemp per hour.

Midwest Natural Fiber sells the resulting hemp fiber it produces as additive to insulation and concrete producers, VanMeter said, but there's potential from big names like BMW, Nike and Chipotle that are looking to make products and buildings more environmentally friendly.

"If the market is even a fraction as big as we all kind of think and hope it is, then there's room for a lot of people to do really well in this space," VanMeter said.

The university ran hemp-growing trials in six locations last year but expanded the scope to 10 locations throughout the state this year through partnerships with the University of Missouri, Truman State University and private farmers, among others.

Extreme weather took out some of the field plots filled with different varieties of hemp, Valliyodan said. Each of the plots contain up to four hemp varieties that serve different functions: one may be particularly good for fiber production while another may be better for grain or oil production.

Lincoln has been experimenting with about 25 different hemp varieties.

Based on what they've gathered from trials so far, Valliyodan and Kelly Nelson, a University of Missouri collaborator, said fiber and grain hemps tend to have the same growth patterns from Sikeston to Jefferson City to Novelty, where hemp is growing on a farm the two universities are collaborating on.

Nelson said planting date, depth and soil moisture are some of the most important factors for successful yields. LU and MU researchers learned how important they are through several trials over the past few years.

Hemp shouldn't be planted too early in the year, Nelson said, because rain will wash it out.

"This stuff likes heat," he said. "I would say wait until what we call the 'May monsoon' goes by and then plant because it'll get out of the ground, and it'll go to town."

Hemp, which Nelson said tends to be drought resistant, has a growth rate second to bamboo.

Hemp tends to rot in overly wet conditions, he said, so farmers are encouraged to plant in fields with a slight slope because they provide natural drainage.

"We know that we run into challenges with corn and soybeans, but hemp is ultra-sensitive to wet conditions right after planting," Nelson said.

Hemp doesn't need to be planted deep. Nelson said he likes to treat it like alfalfa, "Just get it covered, and it's up in four days if you have good conditions."

Nelson said some farms last year had issues with army worms, but farm site and hemp variety affects the impact of pests and disease.

Harvest timing is dependent on hemp variety as well, Nelson said. Some may be ready to be cut down in early September, before birds can really wreak havoc on fields, while others may not bloom until around the first frost.

That's where Lincoln's Hemp Institute can help, by providing guidance on what types of hemp may grow best in the farmer's particular area conditions.

Moseley said the state's increase in land grant funding this year will allow Valliyodan to further his work, "with hopes that it provides a great return for the state and our agriculture folks."

The university also plans to open Missouri's first hemp testing facility, where farmers and producers can go to test the THC levels of their crop, which determines if it can be used or needs to be destroyed.

Valliyodan said his first piece of advice to farmers looking to enter the industrial hemp field is to study the market well and identify buyers before planting.

"And we are here to help," he said. "We have our social economics guy, genetics side and pathologists, and business side, so we're here to help." 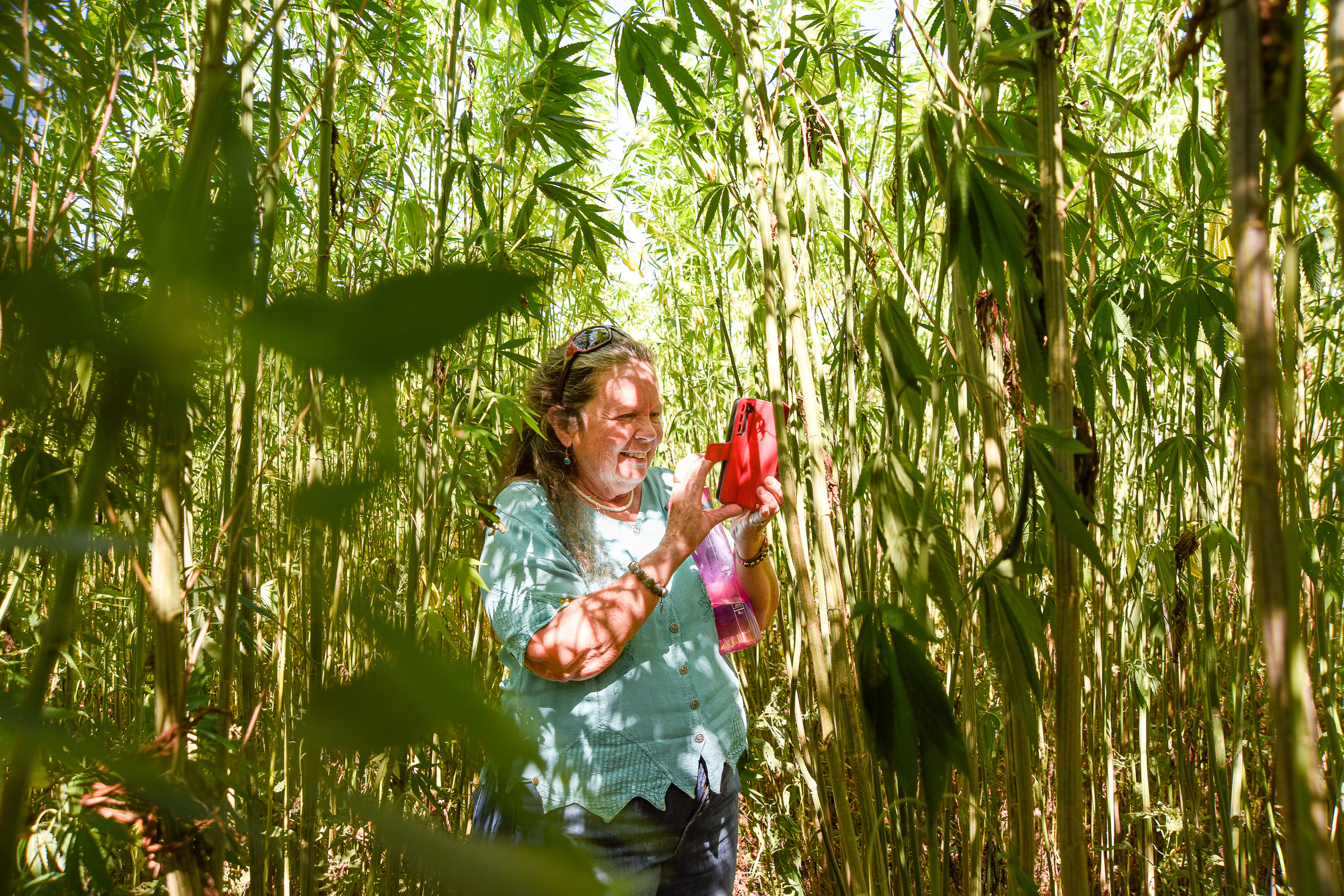 Julie Smith/News Tribune photo: Claire DGaia takes pictures of the fiber hemp stalks and leaves as she walked through a grove of it Wednesday, Sept. 21, 2022, on the grounds of Lincoln University's Carver Farm. DGaia is involved with the National Industrial Hemp Coalition and because of all of the beneficial uses, is excited about the prospect of raising the product. DGaia attended Wednesday's Industrial Hemp Institute at Carver Farm. 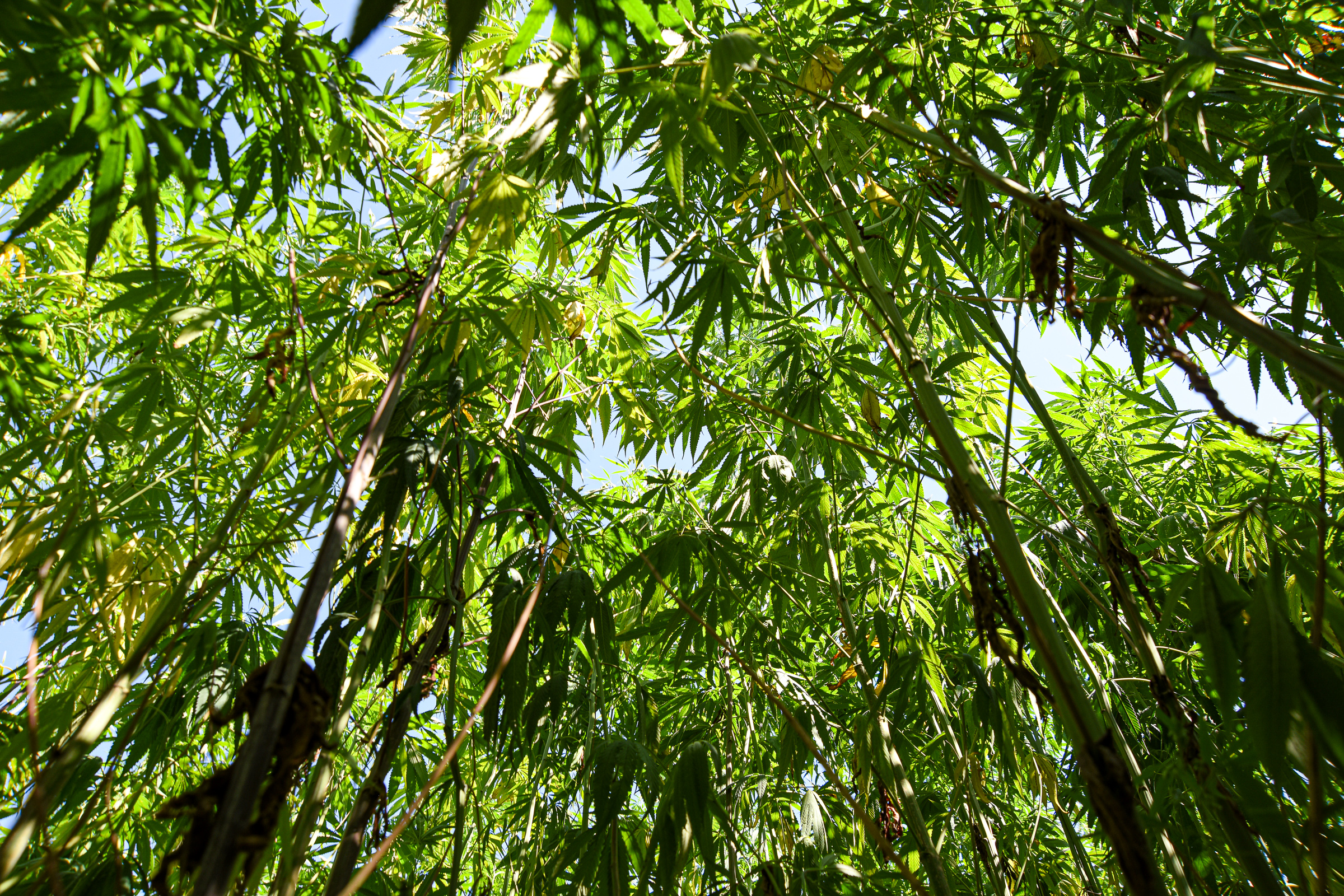 Julie Smith/News Tribune photo: Industrial fiber hemp produces a tall stalk with leaves near the top and, in this case, reach about 12 feet in height. This is just one of the hemp plots Lincoln University researches are growing and keeping detailed accounts of the crop. 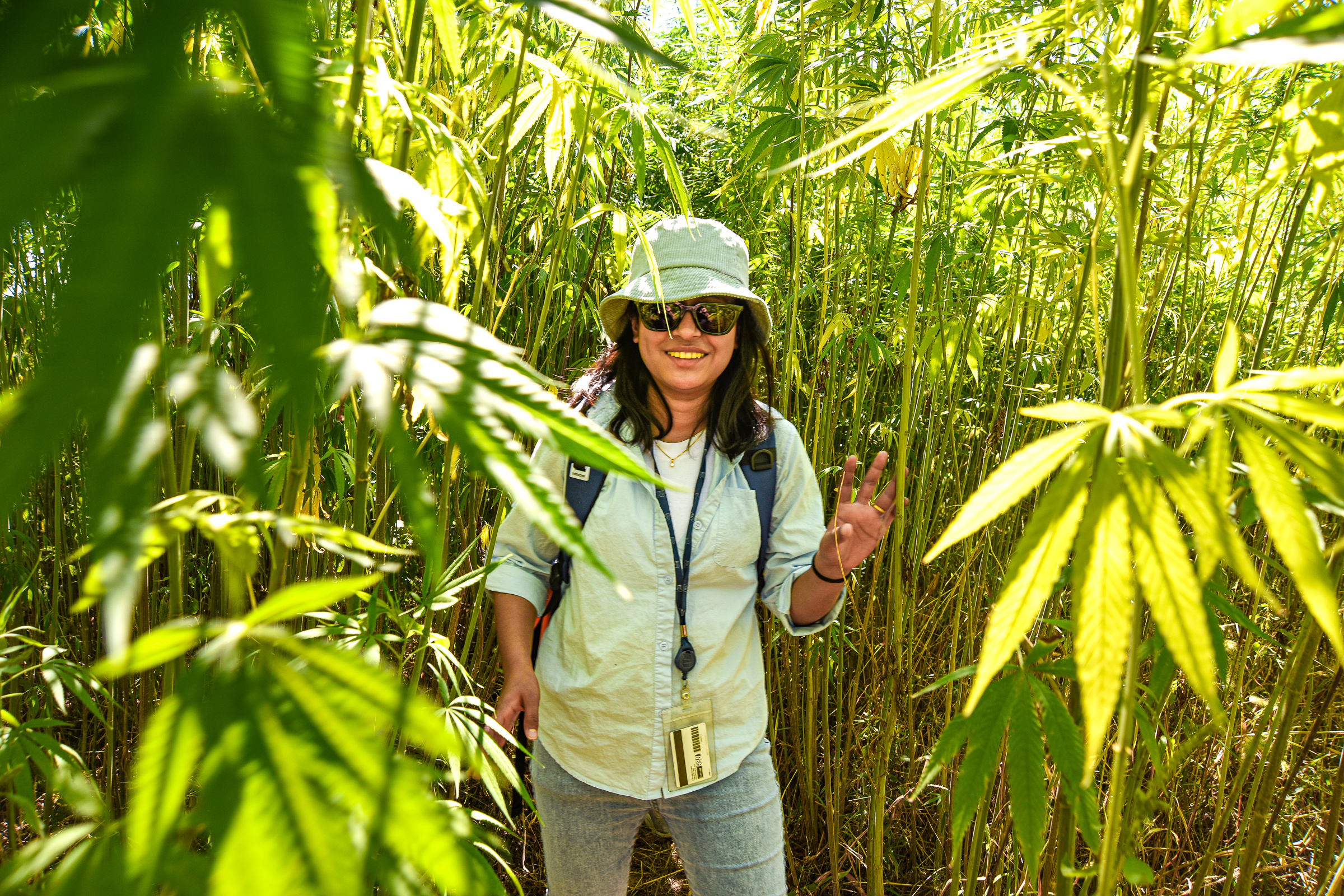 Julie Smith/News Tribune photo: Poonam Karki, a graduate student at Lincoln University, exits an industrial hemp field Wednesday, Sept. 21, 2022, during a tour of the growth plots at LU's Carver Farm on Bald Hill Road. The university hosted a hemp institute which drew interested farmers, producers, educators and others to the Wardsville farm.