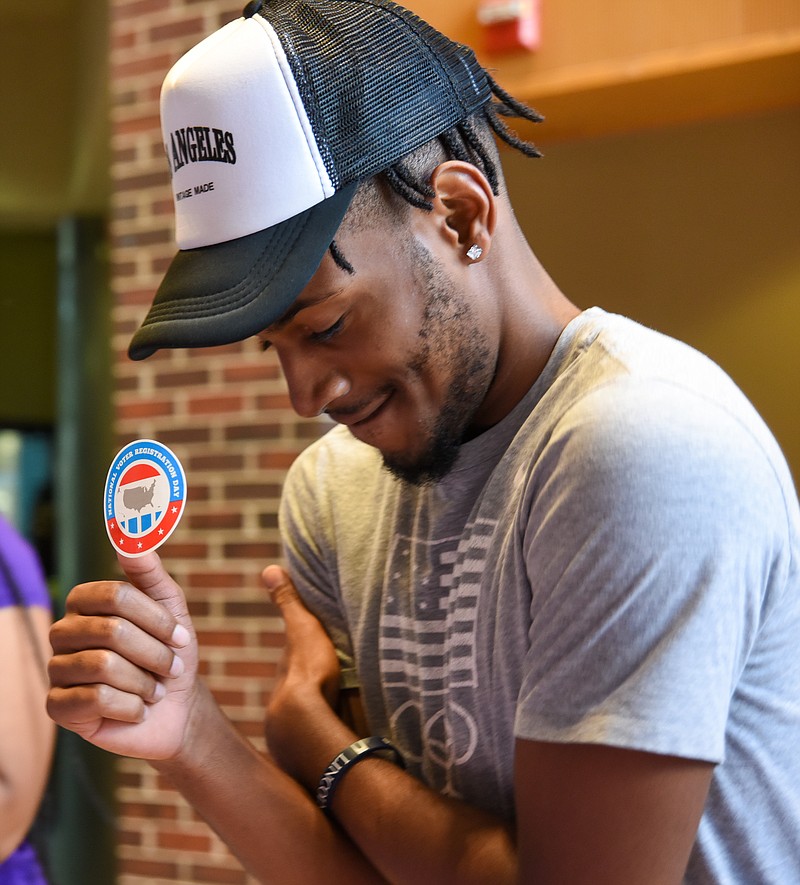 Julie Smith/News Tribune photo: Hollis Franklin poses for videos and pictures after he scanned a QR code to register to vote Tuesday, Sept. 20, 2022, during National Voter Registration Day activities at in Scruggs Hall at Lincoln University in Jefferson City.

The NAACP hosted three rallies in the Capital City on Tuesday (National Voter Registration Day) to get people to register to vote, and to give them the opportunity to share concerns over issues.

"We are registering people to vote and answering voting questions -- any kinds of questions they might have about the upcoming election. Or 'What do I need to show to vote?' Those types of things," Allen said.

She said the "Rally to Action -- Vote," which was in the 100 block of High Street (near the local NAACP office), was a chance for people to offer their opinions.

Folks were simply asked to bring whatever issues they are passionate about to the event, Allen said, whether they are concerned with voting laws, abortion laws, the governor's tax proposal or anything else.

Octavia Ailsworth, with Lincoln University's POISE (Protecting Our Identity through Sisterhood Empowerment) Chapter of the NACWC, said the club's goal Tuesday was to encourage students at the university to register to vote, if they hadn't. And to stress the importance of voting.

"This is our first time doing this -- having a voter registration drive," Ailsworth said. "So, we're very excited about this today. A lot of students are eager to register to vote and to learn about voting."

Chelsea Robinson, president of the Jefferson City NACWC, said she hoped to help students, who aren't already registered, to get registered to vote.

An incentive Tuesday was to offer students who register a chance to win a free smartwatch.

"(I look forward to) seeing who's actually interested in this," Robinson said. "Growing up, it wasn't really a big thing in my family to register to vote. We just cared for the things going on in the world. Now, I'm interested to see the students that are concerned about our upcoming (Legislature) and (about) being informed within the community."