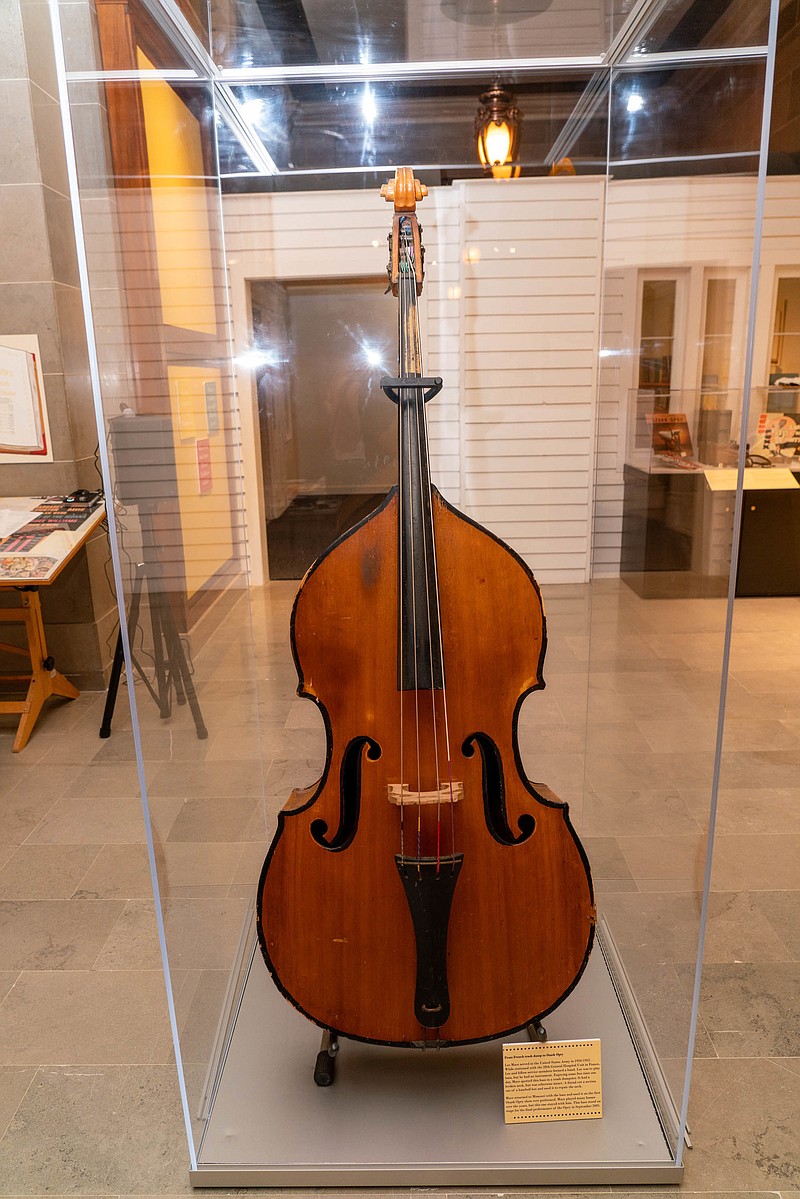 Submitted photo: The bass fiddle belonging to Lee Mace is now on display at the Missouri State Museum in the State Capitol. Mace is credited with spreading the popularity of country music through his opry theater in Osage Beach, which operated for more than 50 years.

A piece of Central Missouri musical history is now on display at the Missouri State Museum in the State Capitol.

For more than 50 years, Mace was a household name in the Lake of the Ozarks. Mace and his wife, Joyce, were the founders of Lee Mace's Ozark Opry, the sign of which still stands along U.S. 54 in Osage Beach.

The Ozark Opry showcased local talent, and during its 53-year run, hosted an estimated 10 million guests.

Mace grew up near Brumley and would go with his family to a friend's home for musical get-togethers.

According to Mace's nephew, Dave Webb, Mace was from a musical family; his mother was an accomplished fiddler. She taught him the basics and from there he learned on his own and became known for playing the bass fiddle.

As a serviceman in the U.S. Army, Mace formed a band while stationed with the 28th General Hospital Unit in France while awaiting deployment to Korea.

Webb said Mace was the designated bass player; however, there was no instrument to be found.

"He was out walking around and saw a bass in a dump," Webb said. "He drug it out and saw it had a broken neck, but it was a bass!"

Mace took it home and one of his Army buddies, who used to work in his dad's cabinet shop, thought he could fix it and just needed a baseball bat. Webb said Mace's friend fixed it and if you look closely, you can still see where the bass was repaired with the bat. Mace went on to use the bass in several shows, both abroad and in the states. Constructed in 1938, Mace's instrument was a Key bass fiddle, one of fewer than 50 such instruments produced, according to a bass fiddle registry.

The Maces were credited with preserving old-time country traditions with the advent of their Ozark Opry. What started in 1953 as a show or two weekly, turned into shows six nights a week for more than 30 years. The couple is credited with starting the first live nightly family show in America, a template that is still used by the Branson entertainment industry.

During the offseason, they took their show on the road, first with only two cars with the bass tied to the top. They eventually advanced to a bus. Then Mace learned to fly and flew with two show members while the rest rode the bus.

In June 1985, he and a friend took off in a small, experimental plane, but did not make it home. The two were killed when the plane crashed near Gravois Mills. Mace was 57.

For years after Mace's death, the bass sat unused, but was included on stage for the Opry's final show, Webb said. At the time of the show's closing, the bass fiddle was given to Webb and was displayed in his home. For a while, he loaned it for display at the Ozark Opry Museum in the old Opry building.

One day, Webb said he was perusing Facebook and saw a post featuring Missouri Trailblazers on the Missouri State Museum's page. As a coincidence, Mace was one of the featured Trailblazers.

"I knew the bass needed to be on display for everyone to see," Webb said. "I was put in contact with Tiffany Patterson from the Missouri State Museum, and she began to help make arrangements for us to get it donated."

The bass was formally put on display Aug. 25, in front of a crowd of more than 30 family members, friends and past performers with the Ozark Opry.

For those interested in seeing the bass and other Trailblazer exhibits, they can visit the Missouri State Museum, which is located on the first floor of the state Capitol.