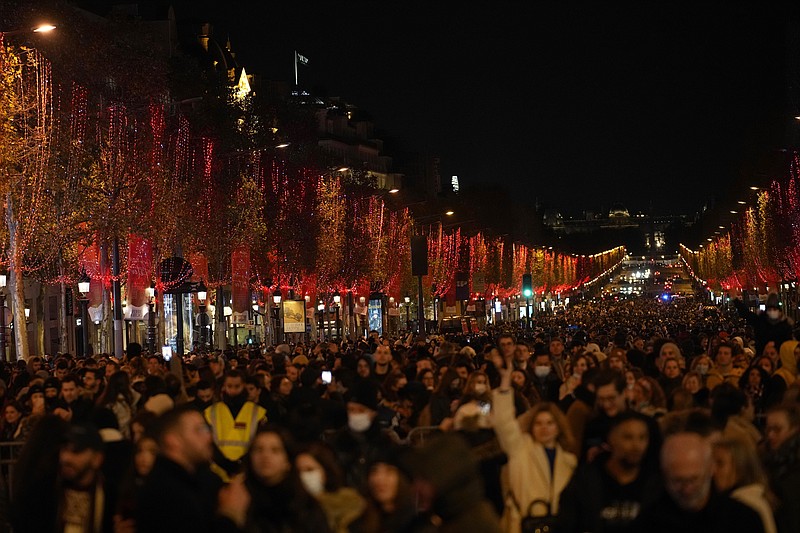 FILE - Spectators gather to attend the Champs Elysee Avenue illumination ceremony for the Christmas season, in Paris, Sunday, Nov. 21, 2021. The committee governing Paris' Champs-Elysees says Tuesday Sept.20, 2022 they are switching off the lights on the famed avenue at the earlier time of 10pm from now and and until further notice to help save energy -- as the war in Ukraine squeezes the electricity market. (AP Photo/Christophe Ena, File)

PARIS (AP) -- Paris' Champs-Elysees said it will be switching off the lights on the famed avenue hours earlier each night until further notice to help save energy as the war in Ukraine squeezes the electricity market in Europe.

The plan announced Tuesday means lights on the avenue will go dark at 10 p.m. instead of the current 1 a.m. It will take effect Oct. 15. Shops on the avenue that remain open past 10 p.m. will "naturally" have an exemption, the committee governing the avenue said. The ruling affects dozens of luxury boutiques but will not affect public street lamps.

The avenue's dazzling Christmas illuminations will also be affected -- and will now be switched off at 11:45 p.m. instead of 2 a.m.

The initiatives follow plans by Paris Mayor Anne Hidalgo to save energy across several of the City of Light's iconic monuments.

Last week, it was announced that lights will be switched off at the Eiffel Tower at 11:45 p.m. -- as soon as the last tourist leaves -- instead of the current 1 a.m.

Other Paris landmarks, like City Hall, will turn off their lights at 10 p.m.

Hidalgo said she feared that energy demands would increase over winter and she hoped to avoid shortages.