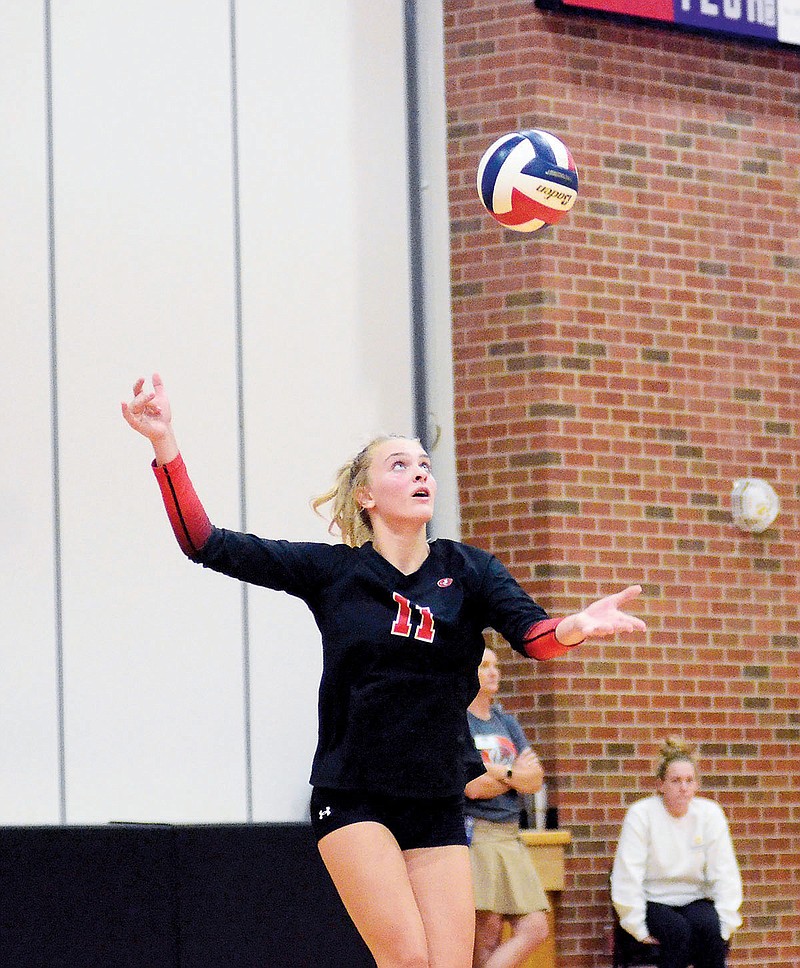 It had been 10 days since the Jefferson City Lady Jays had last played a volleyball match.

Needless to say, they were well rested for the Blair Oaks Lady Falcons.

Jefferson City pulled away late in the first set, dominated the second set and rallied in the third set to sweep Blair Oaks 25-20, 25-11, 26-24 at Fleming Fieldhouse.

“That was a good way for us to come out,” Jefferson City coach Ali Eskens said.

Jefferson City last played Sept. 10 in a tournament in Effingham, Ill. The Lady Jays were scheduled to play last Monday at Lebanon -- their only match last week -- but that match was postponed due to a bus accident.

“There’s always that concern when you come back out,” Eskens said. “It had been more than a week since we played a game. You never know if that’s going to be helpful or hurtful.

“Tonight, it ended up being helpful for us.”

The Lady Jays came out with plenty of energy to play the Lady Falcons, who are ranked No. 1 in Class 3 by MaxPreps.

“They come out with that energy a lot,” Eskens. “That’s not something I have to coach very often, they create that themselves.”

Hannah Linthacum had a kill on a free ball and then recorded one of her four blocks to give Jefferson City a 9-6 edge in the first set.

“Any time you’ve got that size at the net, it’s extremely beneficial,” Eskens said, “especially when you’ve got a hitter like Autumn (Bax) at the net.”

Blair Oaks battled back, getting service aces from Libby Juergensmeyer and Bailey Braun. Bax followed with a block to tie the score at 15.

But attack errors began to plague the Lady Falcons, as those accounted for four of Jefferson City’s final 10 points in the set.

“They definitely came out ready,” Blair Oaks coach Megan Distler said of Jefferson City. “You could tell that was a game they wanted really bad, and we just made a lot of errors in the beginning. We weren’t quite all there.”

“Something we talk a lot about is minimizing unforced errors,” Eskens said. “We want to make sure we’re taking care of business on our side of the net.”

Blair Oaks had nine attack errors in the first set, then had 10 more in the second set.

“We were definitely a little off there,” Distler said of the Lady Falcons’ passing and hitting in the stretch.

When Blair Oaks was hitting well, Jefferson City’s defense came up with some timely digs.

“We talk a lot as a group about playing smarter, not harder,” Eskens said. “We’re a group that’s making reads, paying attention to what’s going on on the other side.”

The Lady Jays used a 6-0 run, capped by back-to-back kills from Hannah Vogt, to push their second-set lead to 14-5.

Jefferson City closed the second set on an 8-1 run to take a two-set lead.

Blair Oaks regrouped and had the lead for much of the third set. Bax and Aubrey Hardwick each had two kills early in the set to build a 10-7 lead.

“In that third set, we were finally playing with some energy,” Distler said. “We were controlling more things on our side of the net.”

Maddie Mitchell had back-to-back kills for the Lady Jays, closing Blair Oaks’ lead to 16-15. The Lady Falcons then took advantage of a few Jefferson City miscues, and a kill by Anna Wekenborg pushed the lead back to 23-17.

The Lady Jays fought off one set point and closed the third set on a 9-1 run, getting three kills from Bri Avey and two kills from Vogt. Linthacum finished the match with a block at the net.

“Those girls have grit and determination,” Eskens said. “That’s not the first time they’ve come back from a deficit like that.”

“We did a really good job of spreading our offense,” Eskens said.

“Our setters did a good job of mixing things up, keeping them on their toes.”

Bax had a match-high 10 kills for Blair Oaks, followed by Braun with nine kills. Juergensmeyer finished with 25 assists and Tayla Prenger added 14 digs.

“It definitely wasn’t our best night of volleyball,” Distler said. “I didn’t have them quite ready enough, but we’re going to learn from this, we’ll grow from it and move on.”

Jefferson City (9-4) plays Thursday at Fatima, with the freshman match starting the tripleheader at 5 p.m.

Blair Oaks (16-2), which had its 15-match winning streak snapped, plays Thursday at Hallsville. That tripleheader also starts at 5 p.m.