How do you get monkeypox? Sex guidelines are under debate 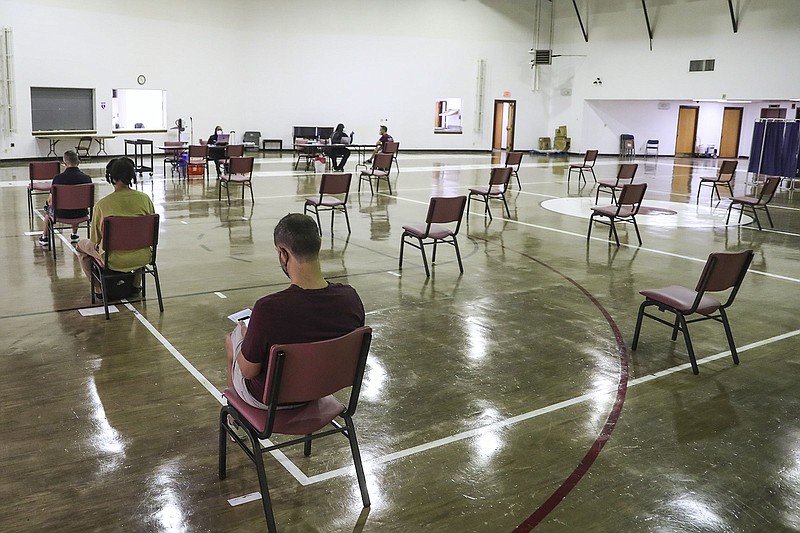 People sitting in the waiting area after receiving their monkeypox vaccine at the Dr. Ala Stanford Center for Health Equity in North Philadelphia on Aug. 31, 2022. The Black Doctors Consortium hosted the clinic. (Heather Khalifa/The Philadelphia Inquirer/TNS)

PHILADELPHIA -- The last weekend of August, party promoter Jeremy Taylor hosted a dance at a Broad Street club in Philadelphia featuring tracks from Beyonce's latest album and cards telling guests where to get monkeypox vaccinations.

Protecting people from a new virus spreading rapidly over the summer was a priority for Taylor, who hosts events under the name JayLaTay. His dances draw many people who identify as Black and LGBTQ -- a population in Philadelphia that's more likely to contract monkeypox, and less likely to be vaccinated against it.

Warnings about the virus transmitting through sustained physical contact didn't phase Taylor, who saw little risk dancing at the venue beneath the Divine Lorraine would endanger guests.

"That type of casual contact, it's highly unlikely for people to transmit," Taylor said.

The real risk comes from sex, according to increasing data on the outbreak that's primarily spreading among men who have sex with men. It remains unclear if semen is specifically playing a role in transmission. The Centers for Disease Control's online guidance continues to highlight physical contact as risky, or contact with objects that touched the skin lesions caused by monkeypox. Yet in an update to their online guidance posted Wednesday, the CDC stated transmission is "almost exclusively associated with sexual contact in the current outbreak."

"We just haven't seen a substantial number of people saying my only exposure is going to this shirtless sweaty dance party," said Jeffrey Klausner, a doctor and expert in sexually transmitted diseases at the University of Southern California's Keck School of Medicine.

Steven Thrasher, a professor of journalism at Northwestern University's Institute for Sexual and Gender Minority Health and Wellbeing, wrote an article last month in Scientific American arguing monkeypox should be called a sexually transmitted infection.

In an interview, he questioned whether the CDC has been doing more harm than good with its messaging, noting while contracting monkeypox through different types of extended physical contact is possible, the federal health organization's own data has found 94 percent of cases were associated with sex or similarly intimate contact.

There has been concern that emphasizing the role of sex in transmission could ostracize men who have sex with men and encourage homophobia, since monkeypox has primarily spread within this population. Members of the LGBTQ community remember all too well how society initially dismissed the first people to contract HIV because that virus, like monkeypox, started spreading in the gay community.

Other experts said a frank acknowledgment of how the virus is transmitting would prevent unnecessary isolation for infected people and avoid panic that itself could lead to discrimination.

Some health guidance to date has resulted in people unnecessarily "freaking out about blankets and dorm rooms," Thrasher said.

The evidence for sexual transmission of monkeypox

Sexually transmitted infections (STIs) are broadly defined by the CDC as "diseases that are passed from one person to another through sexual contact." They are often spread through semen, though not exclusively. Some sex-related infections, like pubic lice known as crabs, HIV and syphilis can spread through other means.

Whether monkeypox is an STI is largely irrelevant to its treatment, said Michael LeVasseur, a Drexel epidemiologist and an HIV expert.

"It's splitting hairs," he said.

Prevention is a more complicated question. Calling monkeypox an STI could imply for some condoms are effective at preventing spread, LeVasseur noted, but in fact transmission could still occur through contact with lesions elsewhere on a person's body.

A number of studies, many of them from the United Kingdom, point to sex being central to the spread of monkeypox. Two studies, including one with data from Europe, the United States, Central and South America and Australia, found 95 percent or more of cases appeared to stem from sexual contact.

An August study in the medical journal The Lancet found live monkeypox virus in semen, but it's not clear if that is causing infections.

Other researchers note there have been cases of household transmission that did not involve sex. Stuart Isaacs, dean of animal studies at University of Pennsylvania's Perelman School of Medicine, said these cases argue against calling monkeypox an STI.

Still, he thinks the frequency of sex as a mode of transmission probably should be emphasized.

More than half of gay men in America have three or fewer sex partners each year, said Klauser of USC. People in that range aren't very likely to contract monkeypox.

Those more at risk from monkeypox are men who regularly have multiple sex partners -- sometimes three or more partners a week.

With a focus on sex, people can do a lot to reduce their risk. Klauser noted cases in the United Kingdom and Europe began dropping in August even though governments there weren't aggressively pushing vaccination.

"The only real explanation is people have changed their behavior," he said.

Thrasher, the expert who wrote about the need to identify monkeypox as an STI, would like to see health guidance that acknowledges the link between sex and monkeypox without stigmatizing those at risk of catching it.

"In the United States we've gotten so used to talking about LGBTQ people as an identity, it's become removed from the act of sex," he said. "Sex itself is an action, and this is the action where it's being seen."

This approach could also help people in Philadelphia to protect themselves amid poor vaccine access and limited supply. The slow rollout of tests and treatments for the virus, and poor access to vaccines, has resulted in racial disparities.

"The vaccine rollout process we have used has not reached the most marginalized, oppressed communities," said Elle Lett, who established Philly MPX Action with a small group of health professionals to do outreach to at risk communities.

Lett, a trans woman, agreed health agencies should talk less about which groups are at risk, and focus more on what actions are risky, including sex.

Awareness of monkeypox is high in the local LGBTQ community, said Taylor, the party promoter who is himself gay. Since the outbreak began he's seen changing habits in the community of men who have sex with men.

Some have shrunk the circle of people they're having sex with, limiting intimacy to a group they know well.

And by the end of his recent dance party, many of the cards with information on monkeypox vaccines had been taken.

Print Headline: How do you get monkeypox? Sex guidelines are under debate