Colts contemplating fixes after another dismal loss to Jaguars 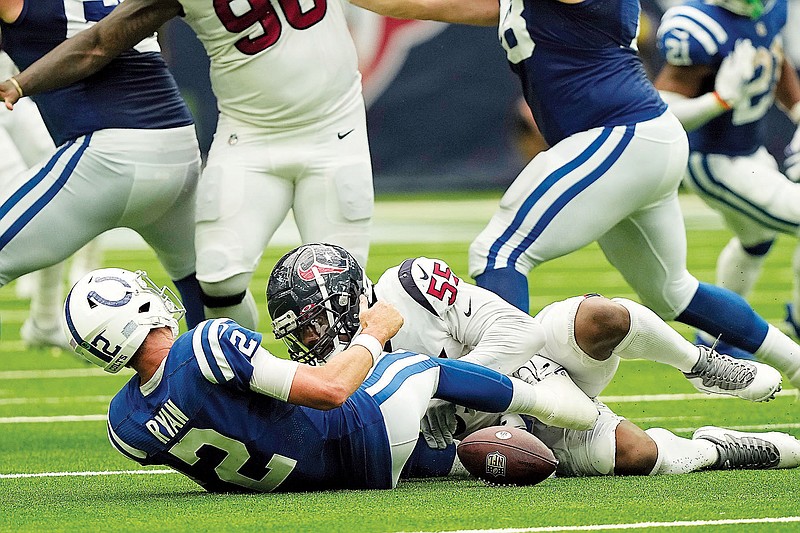 He called the team’s performance pathetic. He even said it twice.

The most loyal Colts fans couldn’t quibble with Reich’s assessment following yet another inexplicably abysmal showing in Jacksonville, where the Colts have now lost eight straight.

“We’ll take our medicine for the pathetic performance (Sunday), coaches and players,” Reich said following the game. “We’ll see how things stack up.”

While Reich knows the game tape doesn’t lie, neither does the tale of the tape.

There were seven winless teams left after Monday night. Indy and Cincinnati share the league’s worst turnover margin (minus-4), an abrupt turnabout from last season’s league-best plus-14. The Colts also have allowed seven sacks, ranking 28th, and are averaging a league-low 10.0 points per game.

But the worst part about the 24-0 debacle was the Colts unable to fight back despite enduring January’s bitter, playoff-eliminating loss also in Jacksonville. They never had a chance in that game and they were overwhelmed again in the rematch.

Now the Colts are searching for answers and looking for the kind of counterpunch they need to turn this season around.

“I thought we were ready to play, but they punched us in the mouth and we ain’t punching back. We got punched the whole game,” running back Nyheim Hines said. “We let our coach down, we let the state of Indiana down.”

Typically after these blowouts, coaches are eager to make corrections, throw away the tape and not look back. But the pass protection problems, the lack of depth at receiver and the struggle to take care of the ball while generating takeaways are hard to overlook.

And now, at 0-1-1, the long road back begins with a difficult three-game stretch that starts against Patrick Mahomes and a Kansas City Chiefs squad that has been to four straight AFC title games.

Another loss in their home opener would almost certainly rekindle memories about Indy climbing out of the 1-4 hole to make the playoffs in 2018 and falling just short last season after going 1-5 -- exactly what Reich hoped to avoid when he altered Indy’s training camp schedule.

Heck, three weeks into the season, it could even stir debate about the franchise’s future direction.

“I think everybody’s ready to move on,” receiver Ashton Dulin said Monday. “We all have the mindset of bouncing back. Yesterday wasn’t us. Yeah, it was embarrassing but we’re a different team (than that).”

Here are other news and notes for the Colt:

• Jonathan Taylor., last year’s rushing champ, only logged nine carries for 54 yards, an average of 6.0. As Indy’s most consistent offensive playmaker this season, he needs the ball in his hands more often.

• With two Pro Bowlers and a third Pro Bowl candidate, the offensive line group was expected to be one of the league’s top units. Instead, there were snapping issues in Week 1, struggles in the ground game in Week 2 and quarterback Matt Ryan has been under constant duress.

• On a day the Colts were missing their top two receivers, Ashton Dulin was a rare bright spot. He caught caught five passes for 79 yards, both career highs.

• Ryan. The 15-year veteran was supposed to add leadership and stability to the locker room. But after two games, the 37-year-old Ryan already has four interceptions and five fumbles against two teams expected to finish near the bottom of the league.

• Ryan brushed off concern over hurting his right hand late in the game and safety Julian Blackmon finished after leaving with a sore shoulder. So again, the questions this week will be all about the availability of WRs Michael Pittman Jr. (calf) and Alec Pierce (concussion protocol) and LB Shaquille Leonard (back surgery).

• 17½ -- Though Reich has repeatedly said he wants the Colts to be a run-heavy team, Indy had only 13 rushes in 48 plays as the Jags had a 17½-minute advantage in possession time.

• Four straight listless starts including the final two games last season has created consternation for a team many thought could contend for the AFC South title.

With the Chiefs, Tennessee and Denver up next, the Colts must find a quick and consistent solution.