EXPLAINER: How the strong U.S. dollar can affect everyone 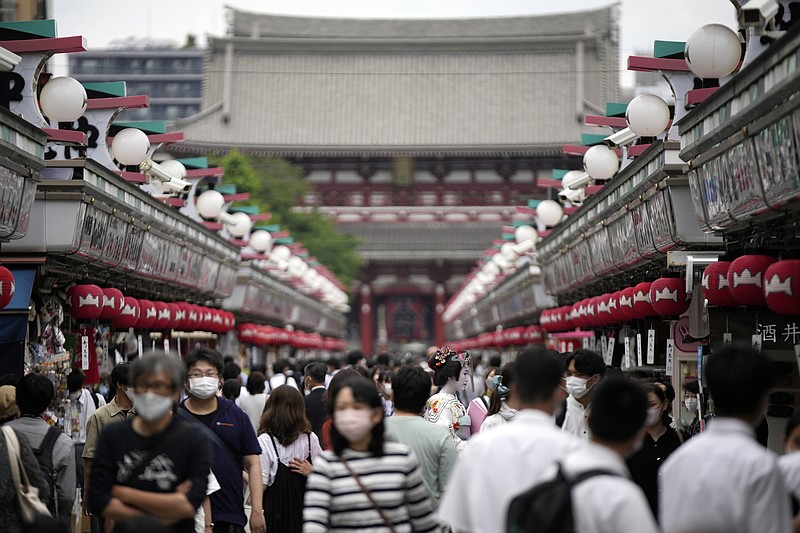 FILE - Visitors walk along a shopping street at the Asakusa District, Friday, June 10, 2022, in Tokyo. The dollar is near its highest level in more than two decades against a key index measuring six major currencies, including the euro and Japanese yen. (AP Photo/Eugene Hoshiko, File)

The value of the U.S. dollar has been on a tear for more than a year against everything from the British pound across the Atlantic to the South Korean won across the Pacific.

After rising again Friday, the dollar is near its highest level in more than two decades against a key index measuring six major currencies, including the euro and Japanese yen. Many professional investors don't expect it to ease off anytime soon.

The dollar's rise affects nearly everyone, even those who will never leave the U.S. borders. Here's a look at what's driving the U.S. dollar higher and what it can mean for investors and households:

What does it mean to say the dollar is stronger?

Essentially that one dollar can buy more of another currency than it could before.

Consider the Japanese yen. A year ago, $1 could get a little less than 110 yen. Now, it can buy 143. That's about 30 percent more and one of the biggest moves the U.S. dollar has made against another currency.

Foreign currency values are constantly shifting against each other as banks, businesses and traders buy and sell them in time zones around the world.

The U.S. Dollar index, which measures the dollar against the euro, yen and other major currencies, has climbed more than 14 percent this year. The gain looks even more impressive compared against other investments, most of which have had a dismal year. U.S. stocks are down more than 19 percent, bitcoin has more than halved and gold has lost more than 7 percent.

Why is the dollar strengthening?

Because the U.S. economy is doing better than others.

Even though inflation is high, the U.S. job market has remained remarkably solid. And other areas of the economy, such as the services sector, have been resilient.

That's helped offset worries about a slowing housing industry and other parts of the economy that do best when interest rates are low. That in turn has traders expecting the Federal Reserve to follow through on its promise to keep hiking interest rates sharply, and to hold them there a while, in hopes of knocking down the worst inflation in 40 years.

Such expectations have helped the yield of a 10-year Treasury more than double to 3.44 percent from roughly 1.33 percent a year ago.

Who cares about bond yields?

Investors who want to make more income off their money. And those juicier U.S. yields are drawing investors from all over the world.

Other central banks have been less aggressive than the Fed because their economies seem to be more fragile. The European Central Bank just raised its key rate by the largest amount ever, three-quarters of a percentage point. But the Fed has already raised its key rate by that amount twice this year, with a third expected this upcoming week. Some traders even say a gargantuan hike of a full percentage point could be possible, following a hotter-than-expected report on U.S. inflation Tuesday.

Partly because of that less aggressive bent, 10-year bonds across Europe and other areas of the world offer much lower yields than U.S. Treasurys, such as Germany's 1.75 percent and Japan's 0.25 percent. When investors from Asia and Europe buy Treasurys, they have to trade their own currencies for U.S. dollars. That pushes up the dollar's value.

Yes. U.S. travelers in Tokyo spending 10,000 yen on dinner will be using 23 percent fewer dollars than a year ago for the same-priced meal.

With the dollar up sharply so far this year against everything from the Argentine peso to the Egyptian pound to the South Korean won, the dollar is going further in many countries than before.

Does it help only rich people who can afford to travel abroad?

No. A stronger dollar also helps U.S. shoppers by keeping a lid on prices for imports and pushing downward on inflation.

When the dollar is rising against the euro, for example, European companies make more euros on each $1 of sales. With that cushion, they could cut the dollar price for their products and still make the same amount of euros. They could also leave the price in dollars alone and pocket the extra euros, or they could find some balance of the two.

Prices for imports fell 1 percent in August from a month earlier, following July's 1.5 percent drop, offering some relief amid the nation's high inflation. Prices for imported fruits, nuts and some peels dropped 8.7 percent, for example. They're down 3 percent from a year earlier.

A stronger dollar can keep prices in check for commodities generally. That's because oil, gold and others are bought and sold in U.S. dollars around the world. When the dollar rises against the yen, a Japanese buyer can get fewer barrels of crude for the same number of yen as before. That can mean less upward pressure on oil prices.

So there are only winners from a strong dollar?

No. U.S. companies that sell abroad are seeing their profits get squeezed.

At McDonald's, revenue fell 3 percent during the summer from a year earlier. But if the dollar's value had simply stayed put against other currencies, the company's revenue would have been 3 percent higher. Microsoft, meanwhile, said changes in foreign-currency values sliced $595 million off its revenue in the latest quarter.

A string of other companies have given similar warnings recently, and further gains for the dollar could add more pressure on profits. Companies in the S&P 500 index get roughly 40 percent of their revenue from outside the United States, according to FactSet.

Any other collateral damage?

A strong dollar can put a financial squeeze across the developing world. Many companies and governments in such emerging markets borrow money in U.S.-dollar terms, instead of in their own currencies. When they must repay their debts in U.S. dollars, while their own currencies buy fewer dollars by the day, it can create lots of stress.

Where's the dollar heading from here?

The dollar's biggest moves may be behind it, but many professionals expect the dollar to at least stay this high a while.

Tuesday's report on U.S. inflation shocked the market and showed it remains more stubborn than expected. That has traders upping bets for Fed rate hikes going into next year. Fed officials have been busy recently reaffirming their commitment to keeping rates high "until the job is done" in breaking the nation's high inflation, even if it damages economic growth.

That bias toward still-higher rates by the Fed should continue to offer support for the value of the U.S. dollar.

For the dollar to weaken meaningfully, strategists wrote in a BofA Global Research report, "the Fed has to get more concerned about growth than inflation -- and we are not there yet." 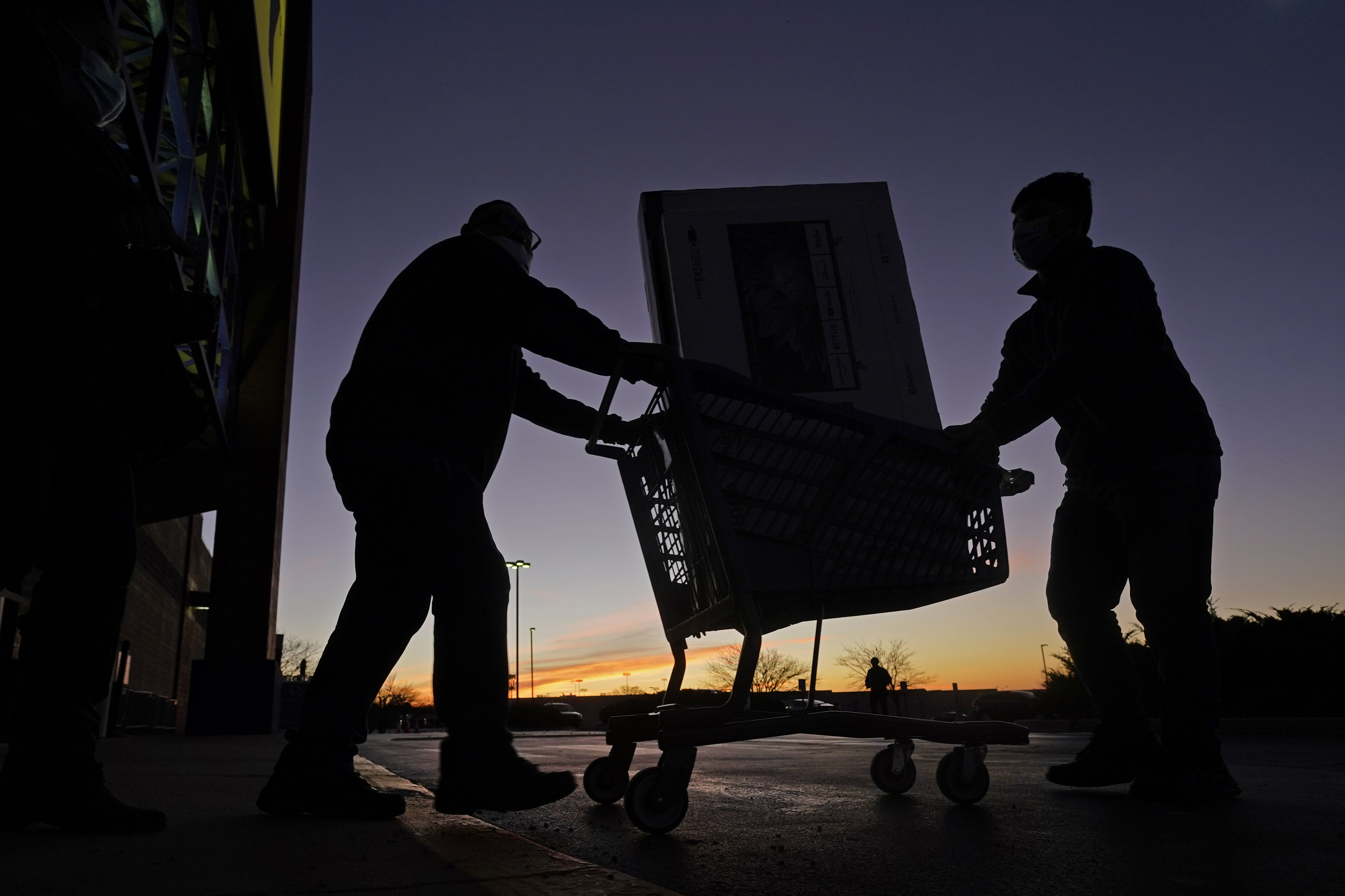 FILE - People transport a television to their car after shopping at a Best Buy store, Nov. 26, 2021, in Overland Park, Kan. A stronger dollar helps U.S. shoppers by keeping a lid on prices for imports and pushing downward on inflation. (AP Photo/Charlie Riedel, File)

Print Headline: EXPLAINER: How the strong U.S. dollar can affect everyone