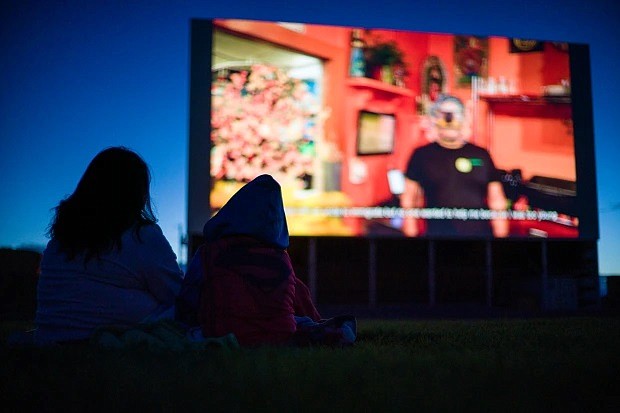 A family watches a short documentary about Mexican immigrants at the Frontier Drive-Inn, a former drive-in theater repurposed into an outdoor theater with overnight lodging in Center, Colorado, on Aug. 13, 2022. (Jintak Han/The Denver Post/TNS)

DENVER -- Starting 160 miles southwest of Denver, where the Sangre de Cristo and San Juan mountain ranges part ways at Poncha Pass, the San Luis Valley spreads out 65 miles from east to west, plus another 120 miles south to the New Mexico border.

And at some point on their way in or out of the high desert, they might also decide to go to the movies. This summer, a circa-1955 drive-in theater located outside of Center lit up its roadside sign and 80-foot screen after nearly four decades of darkness.

The reimagined Frontier Drive-Inn features new overnight lodging structures in the form of 10 modern yurts and four relatively luxurious SteelMaster sheds. At a grand opening weekend slated for Sept. 30-Oct. 2, two earthwork installations will be unveiled, and out-of-towners will be able to come together with valley community members over art, film, popcorn, food truck fare and conversation.

One of the main goals of the project is to bridge Colorado's capital with a rural region facing high rates of poverty and extreme drought that threatens the valley's farm-based economy. For a population of 50,000, increased tourism could provide an alternative, less resource-taxed future.

Frontier owner Mark Falcone, whose Denver-based Continuum Partners is behind Union Station, 9+Co and more developments, bought the 10-acre destination in 2016; it had been closed since the mid-1980s. In 2015, Drive-Inn program director and former Denver gallerist Adam Gildar drove by the site on a film scouting trip, tasked by visual artist Daniel Monroy Cuevas with finding an obstruction in the desert landscape that was also, somehow, cinematic.

"You're going to come here, and even though it's a remote location, the site was built for connection, and chance encounters are very much part of the underlying experience," Gildar said in mid-August, seven years after his initial visit, as the Frontier opened to overnight guests. "The thought is, yeah, we have really nice accommodations, but we're still in a landscape that's unpredictable, and that's part of what I hope is the draw."

The draw will also be single-night movie screenings that span films from the silent era all the way to modern-day cinema. Gildar said he's excited to feature Spanish-language films for the San Luis Valley's large Spanish-speaking population. He's hoping to host live scorings and offer silent-disco headsets so viewers can choose their preferred language or pair the movie with their own chosen soundtrack.

As local families and visitors from as far as California gathered on lawn chairs and blankets to watch the two-night movie lineup, Antonito- and Berkeley, California-based architect Ron Rael was finishing the construction of eight adobe "Skylos," 3D-printed silo structures formed in a circle and open to the sky above them. They are the first of the Frontier's earth installations and will become a gathering place for visitors to the drive-inn, complete with a hot plunge pool at their center.

Rael said he's iterating their construction at the Frontier, but he's also modifying his 3D-printing technology to build out more streamlined versions, creating the potential for relatively cheap housing that's naturally insulated from the valley's elements. It's a vision Falcone and Gildar see as intertwined with theirs for the Drive-Inn.

"(Rael's) project has this element of starting with semi-functional and beautiful aesthetic structures," Gildar said, "but one day (adobe) could be an affordable building material again. I like this notion that you have this property that in some ways fits under the moniker of luxury hospitality, but that could be an incubator for something that has these implications, and hopefully could benefit people that are, say, unhoused."

The contrast takes some imagination. For now, the Frontier invites movie-goers to come for weekend screenings ($8 online, $10 at the door, or pay what you can); and overnight stays in the heated yurts with shared bathrooms (starting at $150/night) or shed suites with private facilities (starting at $210). From the king-sized bed in one of the four suites it is possible to watch a film with patio doors swung open, under Pendleton blankets and Parachute linens.

But sitting outside on the movie theater's open lawn or inside the communal-seating snack bar is more in line with the spirit of the Frontier, the way Gildar describes it.

"When you're normally looking at images these days, you're not looking at a photo or an object, you're just looking at your phone -- and it's like a portal -- or a computer or some screen," he said. "Here ... you're actually noticing the apparatus that it's being projected onto the whole time. So there's this physicality to the image that starts to become part of the experience, and I think that's the draw. Like, why else would you come all the way here to see something that you could see from your bedroom?" 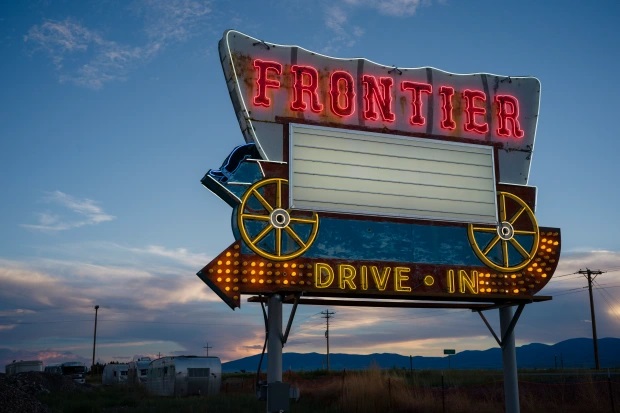 The sign for the Frontier Drive-Inn, formerly known as the Frontier Drive-in, is lit up in Center, Colorado, on Aug. 13, 2022. Although the outdoor theater with overnight lodging is no longer a drive-in theater, the sign still displays the old name of the theater. (Jintak Han/The Denver Post/TNS)

Print Headline: This circa-1955 drive-in is reopening in Colorado’s alpine valley decades after going dark