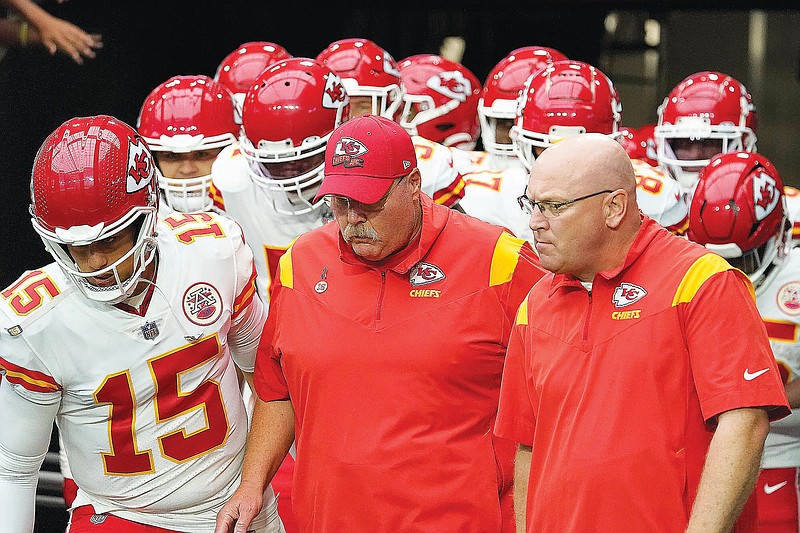 (From left) Chiefs quarterback Patrick Mahomes, coach Andy Reid and offensive line coach Andy Heck lead the team team out of the tunnel before a game against the Cardinals earlier this month in Glendale, Ariz. (Associated Press)

The AFC West did an incredible job this offseason of shrinking the talent gap between the Raiders, Broncos and Chargers and the six-time defending champion Kansas City Chiefs.

From the Chargers adding Khalil Mack, J.C. Jackson and Kyle Van Noy, to the Broncos trading for Russell Wilson, boosting their offensive line and signing Randy Gregory to the Raiders trading for possibly the best receiver in the league in Davante Adams, all four AFC West teams are in a win-now mode and have rosters that could compete for a Super Bowl.

The problem these teams did not take into account is the large gap that still remains between Andy Reid and the Chiefs’ coaching staff to the rest of the division.

The Chiefs not only added key pieces through the draft and free agency to bolster their roster, they made their coaching staff even more elite by bringing back Matt Nagy as a senior assistant and quarterbacks coach and adding Joe Cullen as the defensive line coach from Jacksonville, the guy that got almost all of the credit for the Jaguars’ surprise 9-6 victory against the Buffalo Bills last season.

Pairing these coaches with Dave Toub, Eric Bieniemy, Steve Spagnuolo, and of course, Andy Reid has formed arguably the best coaching staff in all of football.

The gap between the coaching staffs was apparent in Kansas City’s 27-24 win Thursday night against the Los Angeles Chargers.

Chargers head coach Brandon Staley made a name for himself last year as the ultimate risk-taker, going for fourth downs that very few coaches would think about and keeping his foot on the gas at all times.

This led to some wins, like LA’s 30-24 win at Arrowhead Stadium in Week 3 last year, and led to some losses, an example being the widely-scrutinized timeout usage in overtime against the Raiders in Week 18 that led to the Chargers missing the postseason.

Staley was destroyed in the media when his risk-taking did not pay off, and Thursday night showed that the criticism may have got into his head.

He was extremely conservative against the Chiefs and Kansas City made him pay for it on a night where it looked like the Chargers were the better team.

Staley chose not to go for it on fourth-and-2 situations inside Chiefs’ territory on three different occasions, something he did religiously a year ago.

The Chargers elected for a field goal on their first drive and punted the ball away near midfield on the other two opportunities in the first half as they chose to trust their defense with the lead.

While Los Angeles’ defense is much improved and did a great job of slowing down the KC attack, the Chargers were playing with fire allowing the Chiefs to stay in the game.

This allowed a hero to emerge out of nowhere, seventh-round pick Jaylen Watson, and pick off Justin Herbert before returning it 99 yards for the go-ahead touchdown.

Another red flag from Thursday night was Staley’s conservative play-calling.

Herbert’s average depth of target was just 3.8 yards Thursday with 15 throws behind the line of scrimmage and only two attempted 17+ yards downfield.

With Herbert having top-tier arm talent in the league, using him as a game manager is mismanagement at its finest. Just for reference, Herbert’s two throws 17-plus yards down field were both completed and went for a combined 74 yards and a touchdown.

Elsewhere in the division, Broncos head coach Nathaniel Hackett and Raiders head coach Josh McDaniels have had rough starts to their new gigs.

The whole country got to see Hackett bleed away the entire clock on a potential game-winning drive against the Seattle Seahawks on Monday Night Football before attempting a 64-yard field goal instead of going for a fourth-and-5 with their new toy, Wilson.

To the surprise of nobody, Brandon McManus’ kick was wide and the Broncos lost a stunner in the debut of their new roster.

McDaniels is in his second stent as a head coach after coaching Denver for the 2009 and 2010 season, leading the Broncos to an 11-17 record before being fired.

His first game as a head coach for the Raiders did not go well, as he refused to make any adjustments while Derek Carr was under constant duress, leading to three picks thrown by Carr while he force-fed Adams 17 targets in the Raiders’ 24-19 loss to the Chargers.

The AFC West is set up to be a heavyweight fight all season as each team is loaded with talent, but Kansas City still has the upper hand as its coaching staff remains head and shoulders above the rest of the division.