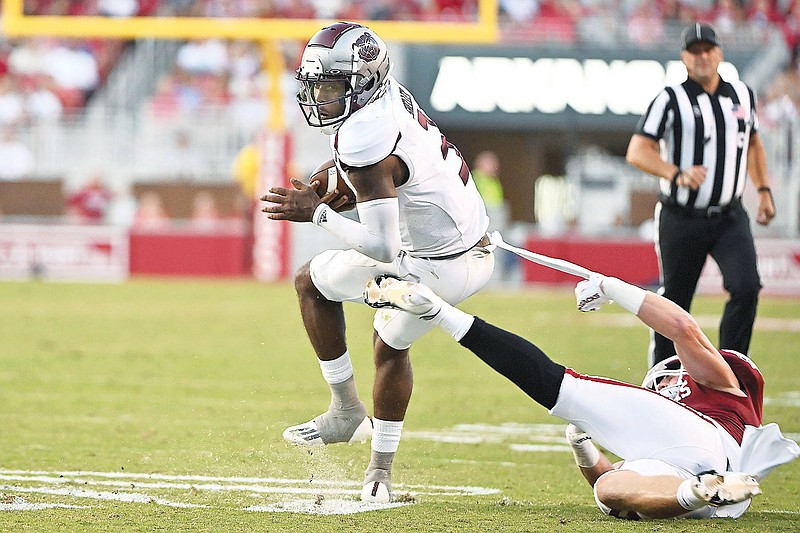 Sanders caught a shovel pass for a 73-yard touchdown scamper with 11:38 left and Stephens returned Missouri State’s ensuing punt 82 yards to give Arkansas (3-0) its first lead of the game at 31-27.

Petrino coached Arkansas from 2008 to 2011 before being fired in spring of 2012 after a motorcycle wreck and proceeding scandal. He won 11 games and 10 games in his final two seasons with the Razorbacks. Arkansas hasn’t reached the double-digit win mark since.

“Their team wasn’t better than us today because we beat them, but Coach was better than me today and I’ve got to get that fixed,” Arkansas coach Sam Pittman said.

“I thought both of them played well,” Pittman said. “We just told KJ on the last couple drives, it’s your game, take over the game. That’s what he does.”

Missouri State took the lead early in large part thanks to the Razorbacks’ self-induced difficulties. Arkansas’ first four possessions resulted in two three-and-out punts and two lost fumbles, including one by Sanders on the Missouri State goal line the Bears picked up for a touchback.

Bears quarterback Jason Shelley threw for 357 yards and a touchdown, taking advantage of an Arkansas secondary that was without starting nickel Myles Slusher and preseason All-SEC safety Jalen Catalon, who is out for the season with a shoulder injury.

Notes: Sanders entered the game first in the SEC in rushing, averaging 136.5 yards through two games. No other player in the SEC averaged more than 90 through the first two weeks. The game was Sanders’ second straight in setting a career-high. … Arkansas sacked Shelley eight times, the most the Razorbacks have had since 2012. Through three games, the Razorbacks have 17 sacks. They had 25 last year in 13 games. … Arkansas held on, but could fall from No. 10 given the performance. … The Razorbacks were darlings after a 2-0 start boosted them into the Top 10, but with a stretch of SEC games upcoming, Arkansas has plenty to fix if it wants to stay in the dark horse conversation. … Missouri State proved itself capable of playing up and could compete for an FCS national championship. … Arkansas will play Texas A&M in Arlington, Texas, in the annual Southwest Classic on Sept. 24. … Missouri State opens Missouri Valley Conference play at home against South Dakota State on Sept. 24.