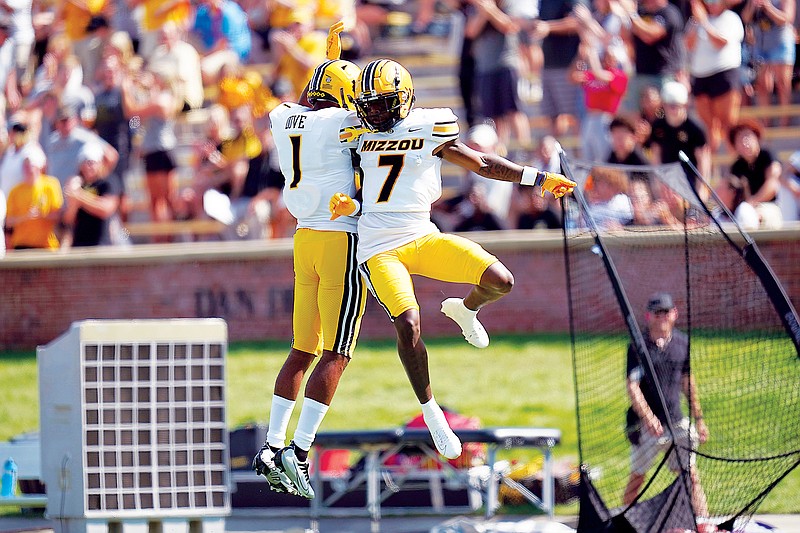 Missouri wide receiver Dominic Lovett (7) is congratulated by teammate Tauskie Dove after catching a 79-yard pass for a touchdown during the first half of Saturday’s game against Abilene Christian at Faurot Field. (Associated Press)

COLUMBIA -- Missouri got a few of the kinks out.

The Tigers beat the Abilene Christian Wildcats 34-17 on Saturday at Faurot Field in Missouri’s final matchup before the start of SEC play.

The Tigers scored five times on offense, including two field goals, and had a punt return touchdown to get the day started.

Luther Burden lined up to return a punt for the first time this season, took the ball on the bounce near the left hash at the 22, then got running. Burden sprinted all the way to the home sideline and had open field and a lot of blockers in front of him as he sprinted in for a 78-yard touchdown with 13:43 left in the first quarter.

“Luther did the smart move, he was patient and he looked up before he took it to see if he had space,” cornerback and punt gunner Ennis Rakestraw Jr. said. “After that, it was just him making a play. As a gunner, we’re just trying to buy him time cause he’s an athlete back there.”

After an Abilene Christian field goal with 5:54 left, the Missouri offense got involved. Brady Cook fired deep down the home sideline to find Dominic Lovett for one of his seven catches. Lovett burned his defender and made his way back toward the middle of the field for a 79-yard touchdown to highlight a 132-yard day.

“It felt good,” Lovett said. “We just gotta roll with this momentum and keep the positivity rolling.”

Lovett’s long reception was on the Tigers’ second play of their second possession with 4:47 left in the first quarter to put the Tigers up 14-3.

Harrison Mevis connected on a 32-yard field goal with 3:21 left in the first half to end a nine-play drive, one of his two field goals on a 2-for-4 day.

Rakestraw forced a blocker in the way of a bubble screen, tipped the ball in the air and came down with an interception on Abilene Christians’ first drive of the second half, setting up Missouri at the Wildcats’ 32.

“That was my first pick, I didn’t think I was going to catch it at first,” Rakestraw said. “I was trying to get off the block, he kind of had me caged. And when the ball hit my arm, I got free. … It was unbelievable.”

On the fourth play of the drive, Cook found Peat for a 6-yard touchdown to put the Tigers up 24-3 after Mevis’ third of four extra points.

“A rollout, I think I had pressure so I had to make a little move then get the ball to Peat and watch him score,” Cook said. “That was a fun one.”

Rakestraw then made an open-field tackle, keeping the ball carrier up long enough for Chad Bailey to rush in, force a fumble and recover it himself.

“Coach calls that hustle stats,” Bailey said. “Once you see the ball out, just go get it and that’s what I did. Ennis did a great job wrapping him up, I finished him up and all I saw was the ball on the ground.”

The ensuing Missouri drive ended with a missed 52-yard field goal, then the Tiger defense forced a punt, setting Missouri up at its own 9 for its next drive.

On the first play of the series, David Oke forced his way into the backfield for a strip sack of Cook, putting the ball on the ground in the end zone where Alexander Duke recovered it for an Abilene Christian touchdown.

Missouri answered with a 3:30 drive, ending when Cook found Lovett on a quick slant over the middle, with Lovett rolling over a defender and stretching the ball into the end zone with 22 seconds left in the quarter.

Maverick McIvor kept the Wildcats involved when he found Blayne Taylor on a deep vertical route on the visiting sideline for a 49-yard touchdown with 1:33 left int he game for the final score.

Cook ended the day 21-of-30 passing for 292 yards and three touchdowns. Cody Schrader led the ground game with 10 carries for 54 yards, while Cook had six tries for 42 yards on the ground and Nathaniel Peat had six attempts for 33 yards.

Ty’Ron Hopper led the Missouri defense with five tackles and two tackles for loss, while Darius Robinson, Jaylon Carlies and Kris Abrams-Draine all had four tackles.

McIvor completed 18-of-31 passes for Abilene Christian with an interception and a touchdown on 197 yards.

Jermiah Dobbins led the Wildcats’ ground game with 18 carries for 74 yards, while Kendall Catalon had four catches for 37 yards and Dobbins added four catches for 25 yards. Tristan Golightly had three receptions for 50 yards.

Missouri (2-1) begins SEC play next Saturday when it hits the road to face Auburn for an 11 a.m. kickoff.