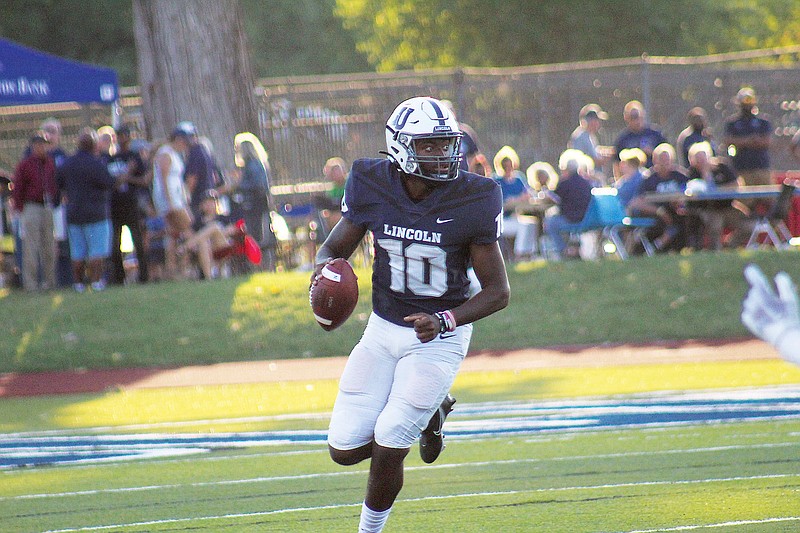 It was a great first quarter Saturday night for the Lincoln Blue Tigers at Dwight T. Reed Stadium, but it was all Fort Hays State for the final three.

Lincoln led 7-3 after the first 15 minutes, but the Fort Hays State Tigers scored the next 41 points to run away with a 51-14 win.

The Tigers got the ball first and got a first down but were forced to punt around midfield. Ethan Sossen let off a good punt, pinning Lincoln at its own 1.

This would be the only first down of the first quarter for Fort Hays State as the Tigers were held to just 18 yards.

“Relentless pursuit and good effort,” Gales said. “We just needed to make sure we were sound in the running game and let the chips fall where they may in the passing game, and we did that. We just need to help them out on the offensive side and on special teams.”

Lincoln put together a fantastic first drive, driving 99 yards in nine plays to put up six points after Damon Bell took an end-around and dropped back to pass, finding Aderias Ealy down the field on a post route for a 49-yard touchdown, Ealy’s fourth TD of the season already.

“It was laid out just exactly how we drew it up,” Gales said. “We were fortunate to get it in the box on that particular play, it was a good feeling.”

After three-and-outs from each side, Lincoln was forced to punt from its own 21. The snap bounced its way to Clayton Winkler and a slew of Tigers brought him down at the Lincoln 6 to give Fort Hays State a first-and-goal.

The Blue Tigers’ defense held strong again, sending Fort Hays State back to the 12-yard line and forcing a field goal attempt. Emmanuel Aguilar booted the 29-yard try through the uprights and Lincoln’s lead shrunk to 7-3 with just over three minutes left in the first.

“Sudden change is something we talk about all the time,” Gales said. “… It’s not something we are estranged to, we just need to make sure we stay on the right side of those.”

The first play of the second quarter was a sign of what was to come, as Nathan Valencia was picked off and gave the ball back to the Tigers at their own 41.

Fort Hays State drove down the field on a nine-play, 59-yard drive that ended with a Jack Dawson 5-yard touchdown run on a read option to push the Tigers ahead 10-7.

Lincoln was forced to punt on its next drive, but another bad snap ended up in Winkler being tackled for a big loss, leaving the Tigers with the ball at the Lincoln 28.

Another Blue Tiger three-and-out followed and the Tigers grabbed full control of the game, driving 51 yards in just four plays to move ahead 20-7 heading into halftime.

Lincoln got the ball to start the second half and faced a fourth-and-1 situation at its own 34. Zamar Brake handed off to Omar Allen but he was stuffed for a 2-yard loss.

“For me, it was more of trying to show the young men that I believe them,” Gales said. “We wanted to really establish the ground game today, and I thought that was the perfect time for us to create momentum by imposing our will. Unfortunately, it didn’t happen that way. We aren’t going to regret anything, we are just going to learn from the results.”

It was all Fort Hays State after this.

The Tigers scored the first 28 points of the half to move ahead 48-7 and held Lincoln to just 37 yards in the third quarter.

Lincoln put together another good drive early in the fourth quarter to get back on the scoreboard.

The Blue Tigers drove 75 yards over nine plays, ending with a Bell jet-sweep touchdown from 2 yards out.

Brake led the way in the QB battle between himself and Valencia, completing 14-of-18 passes for 120 yards while Valencia ended 3-of-7 for 38 yards and two interceptions.

“Zamar has been here and done that,” Gales said. “That showed, he was a little more poised and Nathan pressed a little bit, he was trying to do too much. It didn’t happen the way you’d want it to but there will be other opportunities for him.”

Lincoln (0-3) will look to rebound next week on the road against Northeastern State (0-3).