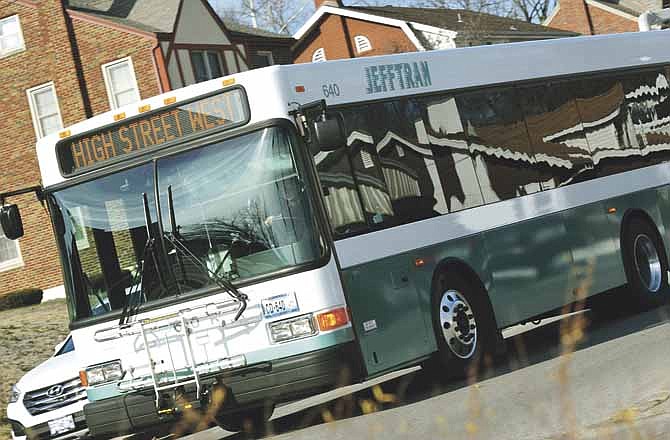 A JeffTran driver maneuvers through the city streets while on an east side route.

Two hybrid buses are on the table for Jefferson City's transit division after a federal grant opportunity prevailed.

A resolution accepting funds from the Federal Transit Administration will be considered during the City Council meeting Monday.

The grant comes at a significant time for public service JeffTran because Transit Director Mark Mehmert said the current diesel buses from 2005 are "beyond their useful life cycle."

If accepted, the grant would funnel about $1.5 million to JeffTran to buy two much-needed buses and replace a bus hoist for the city-shared maintenance facility.

"I'm very excited about it," Mehmert said. "It'll be wonderful to have some replacement buses. These are well beyond their useful life. They're showing signs of wear and tear, with some rust and several other issues that constantly crop up."

JeffTran currently runs eight 35-foot buses for fixed routes and four 30-foot buses for the para-transit service Handiwheels. This would be the first time a cleaner engine is run, though these aren't plug-in buses.

Hybrid buses provide more efficient fuel economy and produce less emissions. Mehmert said these buses can use the soybean fuel mixture that was implemented this summer at central maintenance. They're expected to arrive in 12-18 months.

He said hybrid buses could offer insight into what going fully electric entails, when future technology achieves that in operational practicability and fiscal feasibility.

"It will give us an experience in the electric side of it. Our purpose here is, again, we do want to run clean buses and to be advantageous to our environment, but we are trying to save a little money and hopefully get ourselves positioned for the future," Mehmert said.

The grant funding actually involves a few sources from different funding years, but the opportunity manifested after another city was unable to provide matching dollars, which enabled Jefferson City's division to apply for it. It requires $285,697 in matching funds.

The council will consider a rather contentious request Monday to change a development plan to add more parking spaces to the lot of a local business.

The request from property owner Jeff Schaeperkoetter to alter a 2020 plan was met with considerable resistance from Councilman Jack Deeken during the Sept. 6 council meeting.

Deeken said "there's no excuse" to Schaeperkoetter because he signed a development plan and should be held accountable to that. He asked whether Schaeperkoetter intentially violated the agreement when more spaces were striped last May. City staff, which does not support the request, said they believe there was no ill intention.

After hearing council's discussion while watching remotely, Schaeperkoetter said he hurried by car to City Hall.

Standing at the podium Sept. 6, he stated: "I feel like the issue has already been pre-judged."

What's likely to be discussed is whether Schaeperkoetter was told by city staff that city ordinances did not permit pull-in parking, because he offered this as a possible to suggestion to what unfolded.