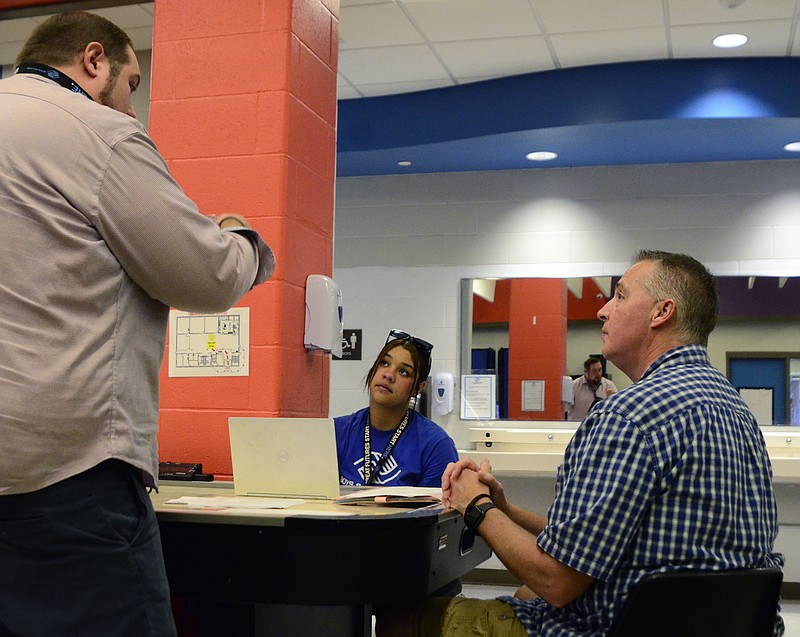 The Boys & Girls Club of Jefferson City is undergoing a transformation.

Simply being a safe place for children to go after school is not enough anymore.

A nonprofit organization whose mission started out in the 1800s as a program to get boys off the streets, the club changed over time.

By 1906, several Northeastern clubs joined forces to create The Federated Boys Clubs -- the beginnings of a nationwide movement.

During the 1980s, the club recognized it had to provide the same care for girls as it did for boys and officially became the Boys & Girls Clubs of America in 1990.

The clubs' mission has grown to enabling all young people, especially those who need the clubs most, to reach their full potential as productive, caring, responsible citizens, according to bgca.org.

The local club's transformation is one which will lead to future educational or career opportunities for students. Although the club still uses Young Developing Professionals to lead classrooms, it's bringing in professional educators to train the YDPs in areas their formal educations may have overlooked, according to Wade Middaugh, the club's chief executive officer.

"Our club has evolved from -- the main focus early on was 'Let's get kids off the street. Give them a safe place.' Which is huge," Middaugh said. "It's a huge part of what we still do.

"We're at a point -- we've reached a growth point. We want to get more intentional about building great futures. When they leave us, where are they? What holes can we fill or what obstacles can we move out of the way to help them succeed? A piece of that was getting more full-time staff who have had educational careers."

The club has assembled what it believes is a dream team of leaders whose intentions are laser-focused on improving club members' futures.

A significant part of what Boys & Girls Club does is STEM-based learning, Middaugh said. STEM refers to science, technology, engineering and math. Each of the directors has their own positive-behavior support for students based on what they've experienced in their classroom careers, he said. They bring expertise that other administrators, who may have finance or administrative backgrounds, may not possess.

"(With those experiences, they) can really look into our program and get more intentional about what we're leaving with kids when they leave us," he said. "We're bringing them in because they still want to be involved with kids and make a difference -- because of what they've seen in their careers in education and because they want to make a different impact outside the school setting."

Chamberlain's position is brand new to the club, Middaugh said. Half of what Chamberlain is asked to do is develop new programs. The other half is training and support for the staff it already has.

It's for staff-retention purposes, but also to meed a role the club sees itself as providing. Many of its staff members are college students (primarily from Lincoln University), whether they're from the education field or not.

"We have a role in helping develop them as well -- and giving them skills they can take. They can see if this is something they want to do," Middaugh said. "That's something we're trying to be more intentional about -- is additional training."

Chamberlain said he trains the YDPs.

"So, the people we hire aren't necessarily from an education background," he said. "We're trying to develop them into educators. So, that's kind of my area. I also do program development."

Hendrickson and Chamberlain provide Social Emotional Learning -- the process in which the YDPs and the students acquire and apply the knowledge and skills necessary to understand and manage their emotions.

Lessons are evolving and going in a really positive direction, Chamberlain said.

"We've seen the stats about how many teachers quit in the first five years. They're devastating," he said. "I just see this as one way to make it better."

The Boys & Girls Clubs' mission is obviously to focus on the children, Chamberlain said. But approaching that mission as the person who will provide the training for the YDPs provides opportunities to help potential teachers succeed.

He wants YDPs to want to work at the club, especially if they're coming from education fields, because they will receive a quality of training that better prepares them for classrooms, he said.

"I want us to be a place to seek out if I'm an employer. We were all teachers," Chamberlain continued. "I can tell you my first year as a teacher was an absolute shock. I was not prepared at all."

YDPs in the classroom who get to experience what goes on for a year or two are going to be much better teachers when they get the full-time jobs, he said.

Chamberlain, who graduated from Lincoln, said he was much better prepared for the experience than teachers from other colleges and universities.

"Classroom management. How to build connections with kids. Nobody can teach you -- really -- how to build a connection with somebody," he said. "And if you can build connections and gain common interests and make kids feel safe, and let them know that they're important in your room, you'll have everything.

"But, nobody can teach you that. It's got to be done in a room."

Members of the leadership team are in classrooms every afternoon, Middaugh said. They're analyzing what's going right or what's going wrong. And they are finding the gaps.

They observe underway classes and may identify areas where the YDPs need more training.

From the moment the club brings in YDPs, it begins bringing them up to speed.

The club requires 90 days of "onboarding," which includes all of their training. The YDPs meet members of the leadership team; they learn about the club's mission and how it operates. They also receive safety training.

"In the past, it was 'Hey, you're hired,'" Middaugh said. "We are better serving our kids. But we are also better serving our staff. And supporting them more. Being able to have full-time people out there that are analyzing and evaluating where issues are. And we're learning how we can better do it -- better serve our kids and staff."

The club's Teen Center, found in the Railton Center, has been developing a program that helps students begin getting "work ready," staffers said.

The center used tax credits to fund and begin a career launch program, Hendrickson said. That program introduced students to a variety of potential careers, and to a number of working community members, with the goal of creating interest in different careers. Through the program, the center helped students fill out resumes and coached them in being interviewed.

"Now we have a new tax credit that is basically (used for) career-launch, but we're adding another layer on top of that called 'job shadowing,' where we'll put youth into places that they are interested in," Hendrickson said. "And they'll watch those jobs, in hopes that we can give them their first job. And help them along their way in their career and also be ready for college if they choose to go that route."

Middaugh was passionate about expanding services for teenagers, Hendrickson said.

A goal is to make sure the club is doing more for older students -- another is to enlarge its teenager population. Most of its teenagers are in sixth through eighth grades, he said.

"What we're trying to do here is get more high-school kids involved and help them -- supporting them along the way however they need -- to be ready for when they graduate," Hendrickson said.

The club is trying several approaches to attract older students.

It is now offering robotics club. It offers graphic design, and is bringing in STEM instructors to offer lessons.

"Really, we're trying to figure out what teens want," Hendrickson said. "And we're helping them by giving them what they need in addition to that. I think for a long time we were really just trying to give them a good place -- and helping them be successful where they were. And not moving them forward."

So now the emphasis is helping students move forward.

"That's kind of why we came up with the idea of doing these mini clubs," Chamberlain said. "At the last hour of the day, we have something called 'Member's Choice,' where they get to do what they want. You know what teenagers and middle school kids want to do -- they just want to sit and play games. We thought that that wasn't very good for the kids.

"I think we'd get more older kids in here if they had the opportunity to do something in a group that is more centered toward them." 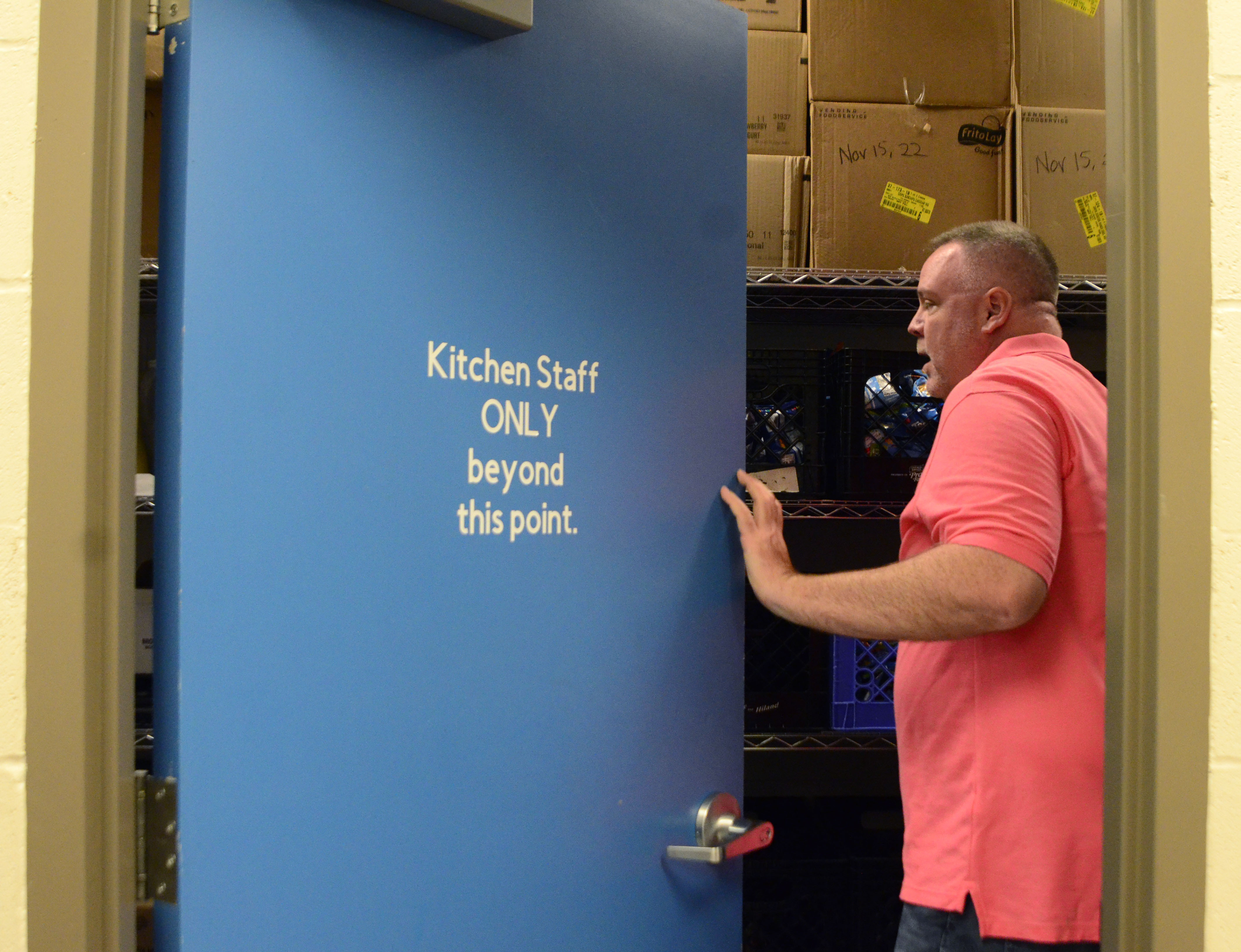 Eileen Wisniowicz/News Tribune photo: Henry Chamberlain enters the kitchen storage room on Thursday, Sept. 1, 2022 at the Boys and Girls Club in Jefferson City. Chamberlain recently started as the Director of Training and Program Development. One of his ideas in the new position is to start a cooking club for the students. 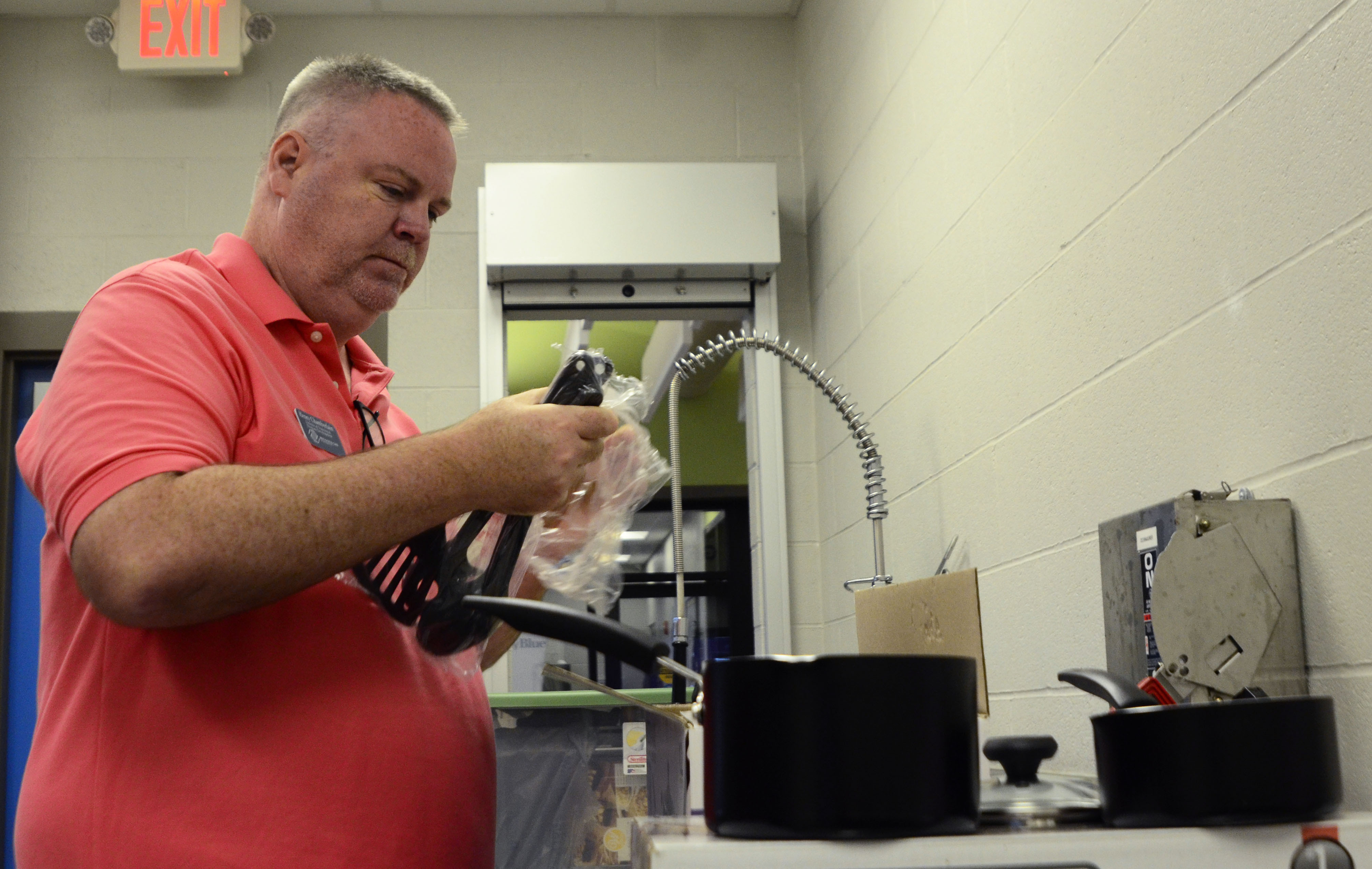 Eileen Wisniowicz/News Tribune photo: Henry Chamberlain unpacks cookware on Thursday, Sept. 1, 2022 at the Boys and Girls Club in Jefferson City. Chamberlain started as the Director of Training and Program Development and is developing a cooking class for students. Chamberlain is also developing other classes that will guage student's interest in different career areas while also giving them an activity to do at the center. 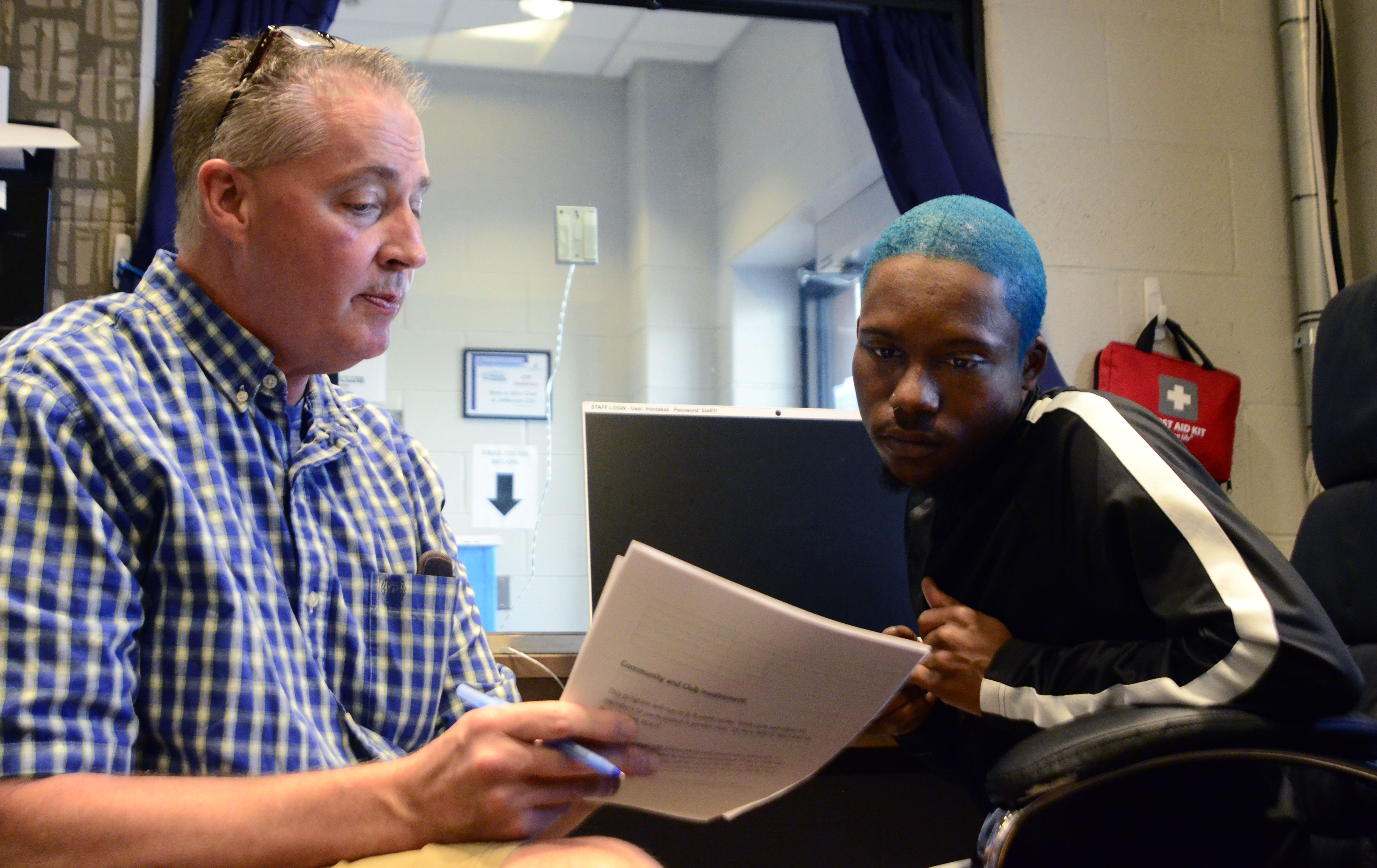 Eileen Wisniowicz/News Tribune photo: David Hendrickson reviews a grant application with Michael Lavender the Third on Thursday, Sept. 9, 2022 at the Boys and Girls Club in Jefferson City. Hendrickson recently started as the Director of Grant Management and is helping Lavender with revisions to his grant application to start a dance club for students. 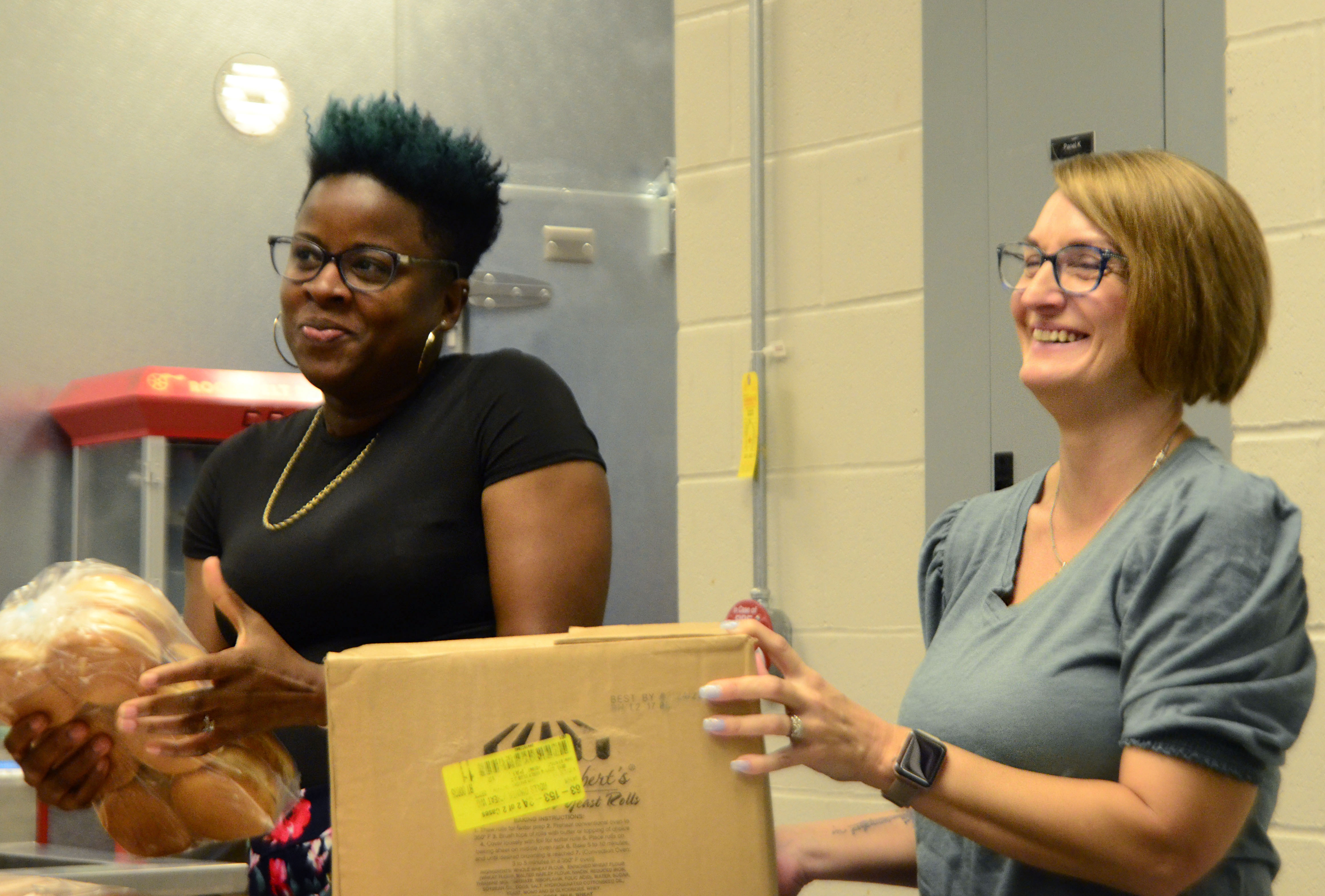 Eileen Wisniowicz/News Tribune photo: Kelly Marshall and Brandy Hays joke with each other as they unpack boxes of hamburger buns on Thursday, Sept. 1, 2022 at the Boys and Girls Club in Jefferson City.