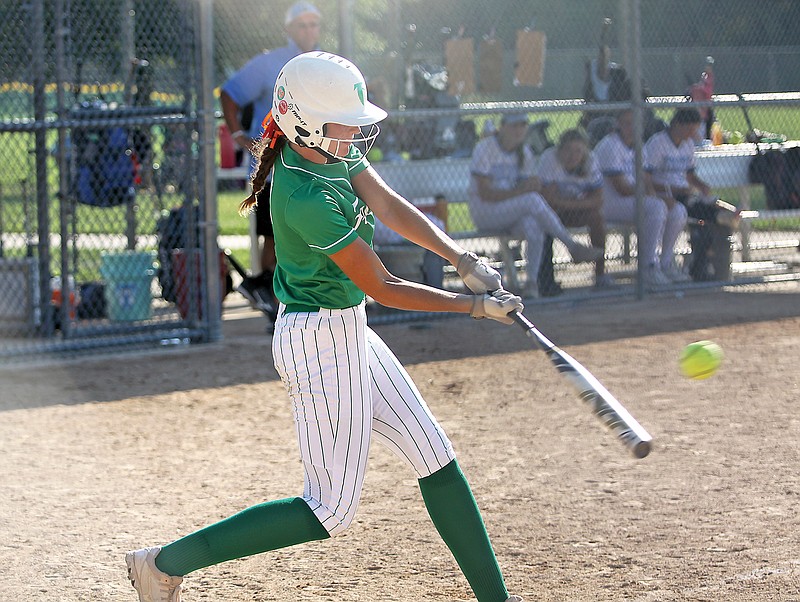 Just before the bottom of the seventh inning began, the timer went off to signal the time limit had been reached for the fifth-place game of the Lady Jays Classic.

But the game wasn’t over until Morgan Luebbering said so.

Luebbering came off the bench and smacked a two-out single up the middle, scoring Kenzie Libbert from second base to give the Blair Oaks Lady Falcons a 3-2 walk-off victory Saturday afternoon against the Father Tolton Lady Trailblazers at Binder Park.

It was a happy ending to a 3-1 weekend for the Lady Falcons.

Libbert led off the bottom of the seventh with a bloop double into shallow right field.

“Before her at-bat, I was talking to the first two hitters,” Buschjost said. “I said, ‘Either Libbert’s going to hit a home run, or she’s going to get a single or a double.’ If it’s a double, I had to make a decision if I wanted to make a sacrifice, or if I want three chances to get a base hit and hit her in.”

Tolton pitcher Kate Guinn got the next two batters out on a strikeout and a flyout. The Lady Trailblazers were one out away from forcing extra innings when Luebbering stepped to the plate.

Buschjost said she gave Luebbering an inning’s notice to get ready for a pinch-hit appearance in the bottom of the seventh. Luebbering delivered in the clutch.

“Morgan started the season playing first base when we were waiting for Taylor (Groner to return from illness),” Buschjost said. “She started off well. She hasn’t had as many chances lately, but man, she came through for us to win this game.

“I hope she keeps that smile on her face for the rest of the day.”

Blair Oaks scored its first two runs in the first inning. Baley Rackers hit a one-out single, then Kally Bruce followed with a double to left field. Groner drove in both runners with a double to right field to give the Lady Falcons a 2-0 lead.

“That’s always a great start,” Buschjost said. “But then as the game continued on, and we weren’t putting anymore pressure on them, I started to wonder if it was going to slip away from us.”

Tolton opened the game with its first two batters reaching base, but Blair Oaks pitcher Olivia Moyer escaped the jam with an infield pop-up and a pair of strikeouts.

Sadie Sexauer hit a solo home run to right field in the fourth and Eva Viox added a leadoff blast to left field in the sixth to tie the game at 2.

Moyer only allowed one other hit in the game, striking out nine and walking two to earn the win.

“Olivia took care of business in the top of the seventh,” Buschjost said. “She retired those three batters and gave us energy in the bottom of the seventh.”

Rackers had two of Blair Oaks’ six hits in the win.

The Lady Falcons started Saturday with a 9-5 win against Class 4 No. 1 Helias, avenging a loss earlier in the week to the Lady Crusaders.

“If we don’t come out with a win against Helias, halfway through the season, we’re already looking at two losses to Capital City and two losses to Helias,” Buschjost said. “I consider that a huge win.”

Blair Oaks scored five runs in the bottom of the second inning and the remaining four in the third to lead Helias 9-1 through three innings.

Belle Boessen, Chesney Luebbering and Emma Wolken each had RBI hits in the second. Libbert hit a two-run homer -- her third of the season -- in the third inning and Wolken added another two-run hit, giving her four RBI in the game.

“We just kept the line moving,” Buschjost said. “We put some hits together and put runs on the board against a really good team.”

Boessen went 3-for-3 with two RBI for the Lady Falcons.

Ava Willson was the winning pitcher, striking out four and walking two in six-plus innings. Moyer closed the seventh, getting one strikeout.

Helias battled back with four runs in the top of the seventh but couldn’t get the tying run to the plate.

“We had to work our tails off to get three wins in this tournament,” Buschjost said.