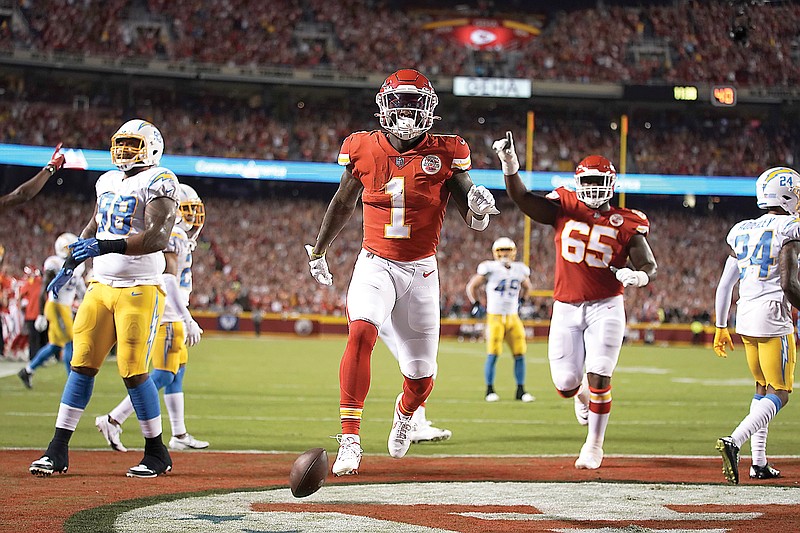 Chiefs running back Jerick McKinnon celebrates after scoring a touchdown during the first half of Thursday night’s game against the Chargers at Arrowhead Stadium in Kansas City. (Associated Press)

KANSAS CITY -- In a showdown between the Chiefs and Chargers, two of the league’s best teams led by two of the game’s bright young quarterbacks, an unheralded seventh-round draft pick who a few years ago was working alongside his mother in a Wendy’s restaurant stole the show.

The Chiefs’ Jaylen Watson picked off Justin Herbert at the goal line early in the fourth quarter Thursday night, headed the other way and was never touched on a 99-yard go-ahead touchdown that propelled Kansas City to a 27-24 victory.

“I don’t even remember what happened at that moment,” Watson said later. “It’s all so surreal.”

Chiefs quarterback Patrick Mahomes threw for 235 yards with TD passes to Jerick McKinnon and Justin Watson, and fill-in kicker Matt Ammendola was perfect in place of injured Harrison Butker. But it was the Chiefs’ defense, and Watson’s highlight-reel interception, that allowed Kansas City (2-0) to overcome its early problems in an early divisional test.

“The thing that I’m most proud of,” Chiefs coach Andy Reid said, “is that we stuck together. Nobody pointed any fingers.”

Two series after Watson’s go-ahead touchdown, things got even worse for the Chargers (1-1) when Herbert was drilled by defensive end Mike Danna while delivering a throw. He left the field clutching his side, returned one play later, then threw an incompletion that forced the Chargers to punt while trailing 24-17.

Clyde Edwards-Helaire promptly split the defense on a 52-yard run to set up a field goal for Kansas City.

Herbert, who finished with 334 yards and three touchdown passes, gamely tried to keep the Chargers alive. He threw a 36-yard dart on fourth down to extend their ensuing possession, then hit Joshua Palmer in the back of the end zone on fourth-and-goal to pull Los Angeles within 27-24 with just more than a minute to go.

Kansas City recovered the onside kick and ran out the clock to end the game.

“You’re not going to see a quarterback in any level of football play tougher and do more for his team and will his team and give them a chance than him,” Chargers coach Brandon Staley said of Herbert, who was getting X-rays and wasn’t available after the game. “There’s nobody who can do what he can do. Nobody. He showed a lot of guts. He showed what he shows us every day, that we’re never out of the fight. He brought us back and gave us a chance.”

The highly anticipated showdown between two of the league’s most prolific quarterbacks, each surrounded by premier playmakers, turned out early on to be a defensive slugfest.

The Chargers held the Chiefs to 13 yards in the first quarter, thanks to relentless pressure from Joey Bosa and Khalil Mack and the fact Derwin James Jr. was just about everywhere, and kept a team that scored 44 points last week in Arizona off the scoreboard until Mahomes slung a sidearm pass to McKinnon early in the second quarter.

Staley finally went for it on fourth down on the opening drive of the second half. And one play after Austin Ekeler picked it up, Williams made a one-handed grab around Chiefs cornerback L’Jarius Sneed to give the Chargers a 17-7 lead.

The game appeared to be getting away from the Chiefs when Mahomes was intercepted by Asante Samuel Jr. on their next possession. But replays showed Samuel didn’t control the ball and the call was overturned, and Mahomes capitalized on his second chance by throwing a 41-yard strike to Justin Watson for a touchdown.

The Chiefs tied it at 17 on the first play of the fourth quarter when Ammendola, who was signed earlier this week, knocked through a chip shot on fourth down at the goal line.

That set up Jaylen Watson’s pick-6 and the first lead Kansas City had all night.

“This is what it’s going to be. We know we’re playing in the toughest division,” Chiefs safety Justin Reid said. “We know we’re going to get everyone’s best shot. We have to come out and we have to perform.”

Notes: The game was the first in the 11-year, $13-billion deal between the NFL and Amazon Prime to exclusively stream Thursday night games. Amazon founder Jeff Bezos joined NFL commissioner Roger Goodell on the sideline before kickoff. … Chargers C Corey Linsley (knee) and RT Trey Pipkins III (ankle) left in the third quarter. … Chiefs WR Mecole Hardman hurt his ankle in the third quarter but returned to the game. … Danna left in the fourth quarter with a calf injury. … The Chargers return home to face Jacksonville on Sept. 25. The Chiefs visit Indianapolis the same day.