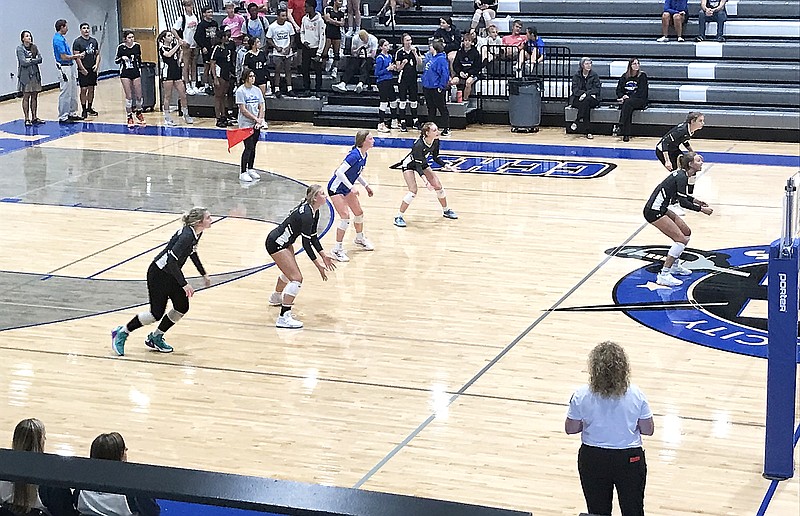 The Warrensburg Lady Tigers just had their number in each set.

“They are a very, aggressive team at the net,” Capital City coach Kelsey Vogler said after a 17-25, 21-25, 23-25 loss at Capital City High School. “They have good seniors that are dominating.”

Warrensburg had three seniors leading the way at the net. Tenaia Maxwell had a match-high 14 kills, Grace Hill followed with 12 kills and Kimberly Maxwell finished with seven kills for the Lady Tigers.

Tenaia Maxwell had kills on the final three points of the match, as Warrensburg rallied from a 16-6 deficit in the third set to complete the sweep.

“We come against players like that all the time,” Vogler said. “She’s going to dominate on the right, left or if she’s coming into the middle on a switch play.

“They know how to adjust to that. It’s just whether or not we’re going to execute our job on that.”

Capital City recorded 10 kills in the opening set, but six attack errors allowed Warrensburg to pull away down the stretch.

The Lady Tigers had 13 kills in the first set and just three attack errors.

Capital City fell behind 17-10 in the second set, as a number of miscommunication errors led to a 7-1 Warrensburg run.

Ava Meinhardt and Reagan Carel each had a kill to start a second-set rally for the Lady Cavaliers. Addison Jones, the libero, had a rare kill that clipped the top of the net and dropped to the court for a point, cutting the Lady Tigers’ lead to 20-15.

Carel served an ace, then Meinhardt had three kills in a five-point span to pull Capital City within one point at 22-21.

Warrensburg answered with a kill by Kira Wyatt, then Tenaia Maxwell had a block and Teagan Anderson served an ace to close the set.

“We lost momentum in the second set, but we did get better from the first set,” Vogler said. “We’re striving to be better on every point.”

Capital City got off to a strong start in the third set, leading 14-6 when Warrensburg called timeout. Five players had at least one kill in that span for the Lady Cavaliers.

Meinhardt had a kill on a free ball and Grace Marshall served an ace to give the Lady Cavaliers a 10-point advantage.

“That third set was very exciting,” Vogler said. “I thought we had it won, and that was probably my error on that.”

But Warrensburg had an answer.

Maddie Meldrem started the Lady Tigers’ comeback with a kill, then Tenaia Maxwell had a block and Kimberly Maxwell served an ace.

Warrensburg closed the gap to 19-18, then the two teams exchanged side outs for the next eight points.

However, when Meldrem got a block to give the serve back to Warrensburg with Capital City leading 23-22, the Lady Tigers never gave the ball back, finishing with three consecutive kills by Tenaia Maxwell.

“We have to just continue to be more consistent and protect our servers,” Vogler said. “When we get that side out, we have to go on service runs.”

Capital City (7-6-1) plays Tuesday at California. The freshman match starts at 5 p.m., followed by the JV and varsity matches.

There was no freshman match Thursday.