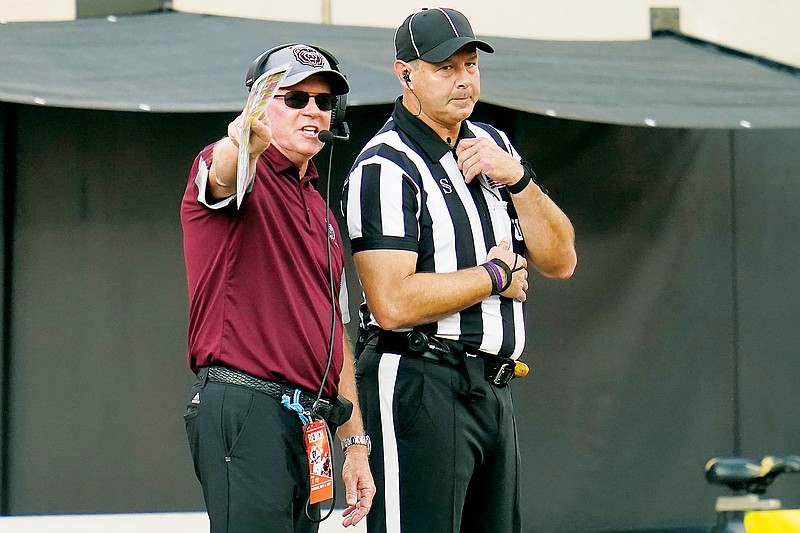 In this Sept. 4, 2021, file photo, Missouri State coach Bobby Petrino talks with an official during the first half of a game against Oklahoma State in Stillwater, Okla. (Associated Press)

KANSAS CITY -- Bobby Petrino is 61 these days, nearly five years removed from being on the national stage with Louisville and, far more importantly, more than a decade removed from the coach’s scandalous flameout at Arkansas.

Just listen to him discuss his return Saturday to Fayetteville, though, when he leads Missouri State against his former program in a much-anticipated game for the FCS program he has quickly turned into a juggernaut.

Petrino smiles and laughs, cracks jokes and deflects praise, and no questions, no matter how awkward, are off limits. Soon, it is evident Petrino has found peace in southwestern Missouri.

“We’ll see how it feels when I get there. Right now I’m just going to focus on the week and the preparation,” Petrino said this week. “I’m sure there will be some feelings and emotions when I step into the stadium, but it’s not about me. It’s about our football team. We’ve been a team dedicated to working hard together. It’s really about the players.”

The critics -- and make no mistake, Petrino still has plenty -- argue it’s always been about him.

Petrino got his coaching start nearly 40 years ago at his alma mater, tiny Carroll College in Helena, Mont., but he was so intent on climbing the professional ladder he rarely stayed in one place for more than a couple years.

It wasn’t until 2003, when he landed the head job at Louisville, that Petrino’s career took off. He took a solid program under John L. Smith and turned it into a power, winning 41 games against nine losses. The Cardinals twice finished in the top 10 in the final AP Top 25 poll, and capped the 2006 season by winning the Orange Bowl.

Then came his disastrous turn as an NFL coach and shockingly quick downfall.

He lasted just 13 games into a five-year contract with the Falcons, resigning less than 24 hours after telling Atlanta owner Arthur Blank he was in it for the long haul. He informed his players with a four-sentence notecard placed in each of their lockers, effectively abandoning them with a 3-10 record to take over as the coach at Arkansas.

Nobody has ever disputed Petrino’s ability to build a college program, so it wasn’t surprising he quickly turned the Razorbacks into a winner. He had them in the Liberty Bowl in Year 2, won 10 games the following year and went 11-2, won the Cotton Bowl and finished fifth in the nation during what became his final season in 2011.

“He’s a great coach. He was when he was here and with the Falcons and Louisville,” current Razorbacks coach Sam Pittman, who has them ranked No. 10, acknowledged this week. “He’s just a really good coach.”

One with flaws, though. And they had nothing to do with X’s and O’s.

On an April morning in 2012, then-Arkansas athletic director Jeff Long learned his football coach had been in a motorcycle wreck in northwest Arkansas. Petrino initially told Long he was alone, but the police report later revealed he had a female passenger on board when he crashed. And when the university began an investigation of the accident, it found Petrino was having an affair with the woman, whom he had hired to work in the athletic department.

Petrino was ultimately fired for cause, and the lasting image from his halcyon days at Arkansas turned out to be from a news conference in which he showed up wearing a neck brace with a bruised and battered face.

“He made the decision, a conscious decision, to mislead the public,” Long said upon firing him.

Petrino, a married father of four, issued a lengthy apology that fell on plenty of deaf ears. He acknowledged engaging in an “improper relationship,” making several poor decisions and said he accepted “full responsibility for what happened.”

Yet success covers many ills, so it didn’t take Petrino long to get another chance. He went 8-4 with Western Kentucky in his lone season, then Louisville came calling again. He took the Cardinals back to four straight bowl games but wasn’t able to duplicate the same magic from his first go-around, and a 2-8 start to the 2018 season led to another firing.

After sitting out a year, he was hired by Missouri State, a middling program in the toughest FCS league in the country that had not qualified for the playoffs since 1990 — back when it was known as Southwest Missouri State. And despite taking over in the midst of the COVID-19 pandemic, Petrino tied for the league title and had the Bears in the playoffs in Year 1, and then won eight games and nearly upset Oklahoma State while taking them back last season.

The Bears are currently ranked fifth in the nation heading into Saturday’s game at Arkansas.

“I’m proud of our team. I’m proud of our assistant coaches and the players we have,” Petrino said. “We have a team that really likes to compete. They like to watch each other. And they’re not afraid to fail, so they’ll go out and hand-signal for a fade on fourth-and-1, and that’s awesome, when someone has that kind of confidence and belief. That’s what you want. That’s what you’re trying to develop young men to do -- to not be afraid to fail.”

Sage advice from someone that has succeeded and failed plenty of times through the years.

Petrino would prefer Saturday’s game be about the players on the field, but he’s not naïve. He knows eyes will be on him when the teams come out of the tunnel of Donald W. Reynolds Razorback Stadium and prepare for kickoff.

“He’s been pretty stonewall, the same person he’s always been — same old guy,” Missouri State quarterback Jason Shelley said this week. “I think that’s going to rub off on the guys, just let us know its a regular game.”