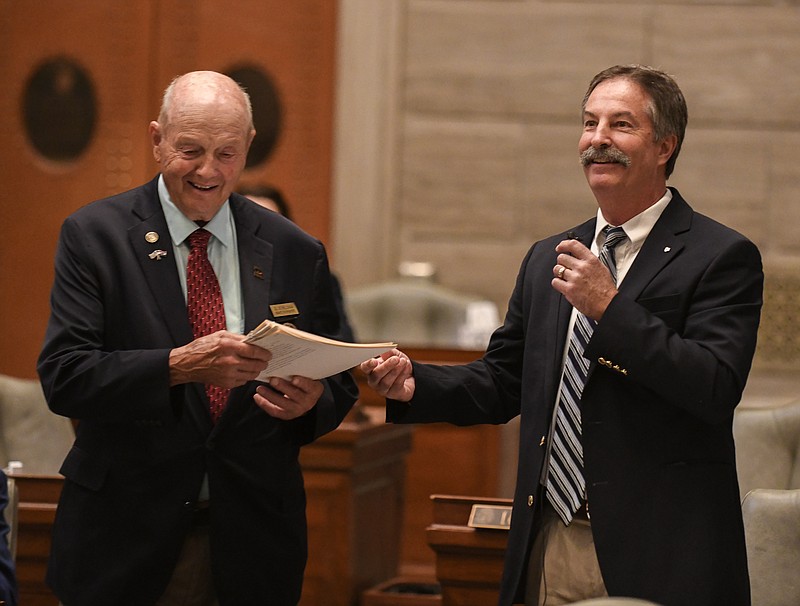 The special legislative session called by Missouri Gov. Mike Parson to cut income taxes began Wednesday, and by the time lawmakers adjourned for the day, one thing was clear -- there is no agreement on a plan.

And that could upend the governor's hopes of a quick session.

In the state Senate, expected to act first on the income tax cut Parson is seeking, 10 bills making cuts in income taxes were introduced, including one that cuts the corporate income tax while leaving the personal income tax untouched.

All but one of the bills were filed by Republicans and include either an immediate or future reduction in the top income tax rate. Senate Democratic Leader John Rizzo, of Independence, also filed a bill, but his proposal would enhance the value of a credit passed last year for low- and moderate-income working Missourians and make no change in tax rates.

A cut in the top tax rate means most of the money goes to higher income earners, Rizzo said.

Sen. Andrew Koenig, R-Manchester, who filed a bill to make an immediate cut in tax rates for individuals and corporations, said Rizzo's proposal is a new welfare program.

"If you have a tax credit where you get more money than you are putting in, that is welfare," he said.

In the Missouri House, no income tax cut plan was introduced, but Rep. Brad Pollitt, R-Sedalia, offered a bill with several tax incentives intended to support the economy in rural areas.

The state general revenue fund is enjoying its largest-ever surplus, with $4.4 billion on hand at the end of August and growth so far in the current fiscal year running at 20 percent, compared to an estimate of 2.1 percent made in January.

In June, Parson vetoed provisions in a spending bill that would have given rebates of up to $500 for each person reporting taxable income, with a total cost cap of $500 million. He said the plan did not have enough money to fund the full rebates and the state should enact a permanent instead of sending rebate checks.

Parson also vetoed a bill with incentives for rural areas, saying the two-year sunset lawmakers included in the legislation was impractical.

In his call for a special session, Parson asked lawmakers to reduce the top personal income tax rate from 5.3 percent to 4.8 percent. He also asked lawmakers to put the rural incentives in the bill and give them a six-year sunset.

The top tax rate has already been falling for several years as part of a phased-in cut enacted in 2014 over the objections of then-Gov. Jay Nixon. The top rate, 6 percent in 2014, is 5.3 percent this year.

There are currently five more reductions to come before the top rate settles at 4.8 percent. Parson's plan accelerates the cut.

Koenig's bill mirrors Parson's plan for an immediate cut but adds additional triggered cuts if revenue growth continues. Koenig's bill also makes a one-half percentage point cut in the corporate tax rate, to 3.5 percent from 4 percent, and also authorizes a second cut, to 3 percent, if the revenue trigger for a personal income tax cut is met.

The bill offers something to everyone, Koenig said.

"Every single taxpayer would get a tax cut," Koenig said. "If you make enough money to pay even $1 in taxes, you will get a tax cut."

Hough's proposal would send rebates of $325 to individuals and $650 to married couples. The three additional triggered cuts would settle the top tax rate at 4.5 percent.

"This would give immediate relief for inflation-impacted families while not bankrupting the state long-term," Houg said. "I want to build some guardrails in there."

Missouri has used surplus funds to add spending for education, health care and other needed programs, noted Hough, who is expected to become chairman of the Senate appropriations committee next year.

The Missouri Independent, www. missouriindependent.com, is a nonprofit, nonpartisan news organization covering state government and its impact on Missourians. 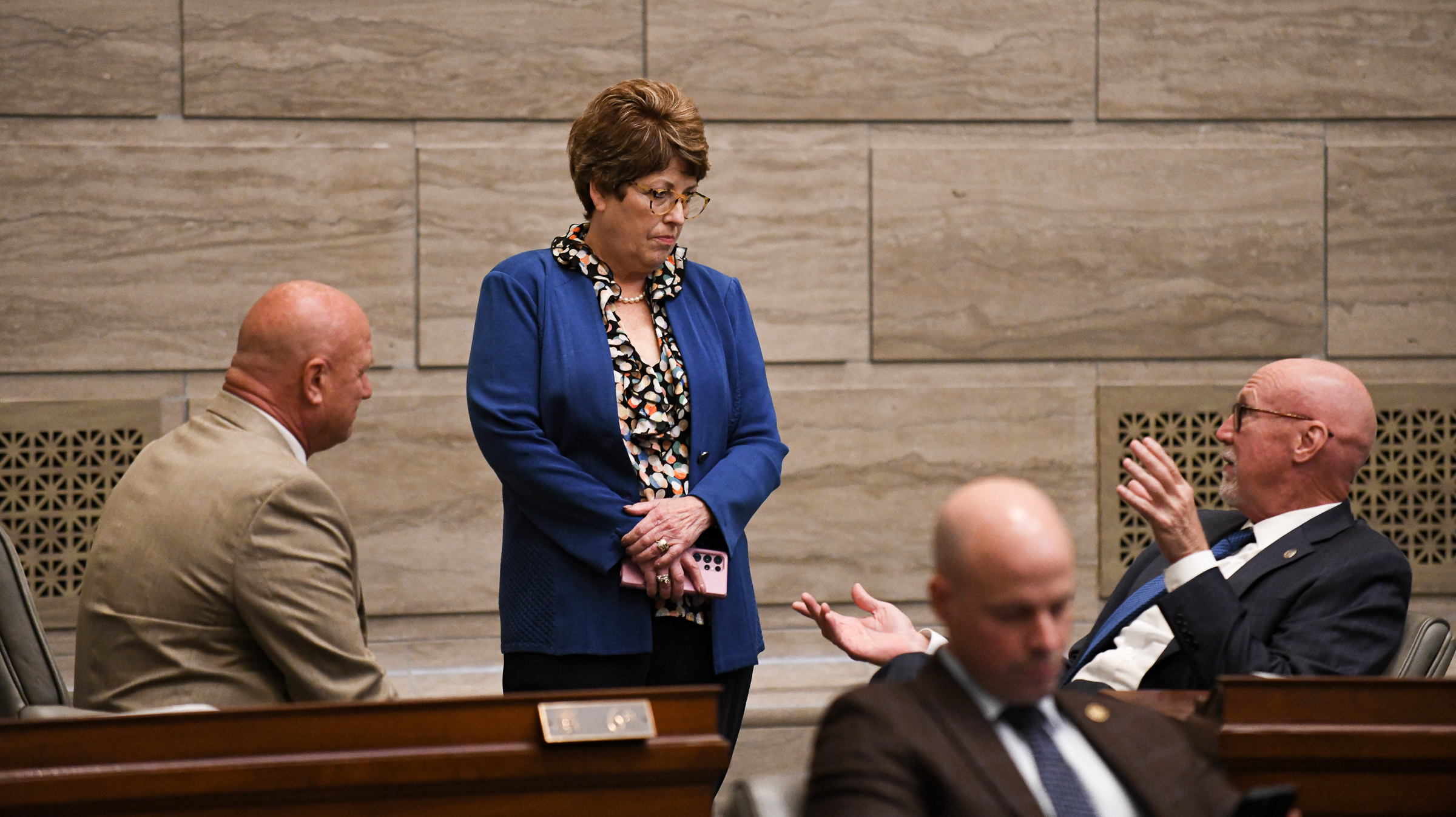 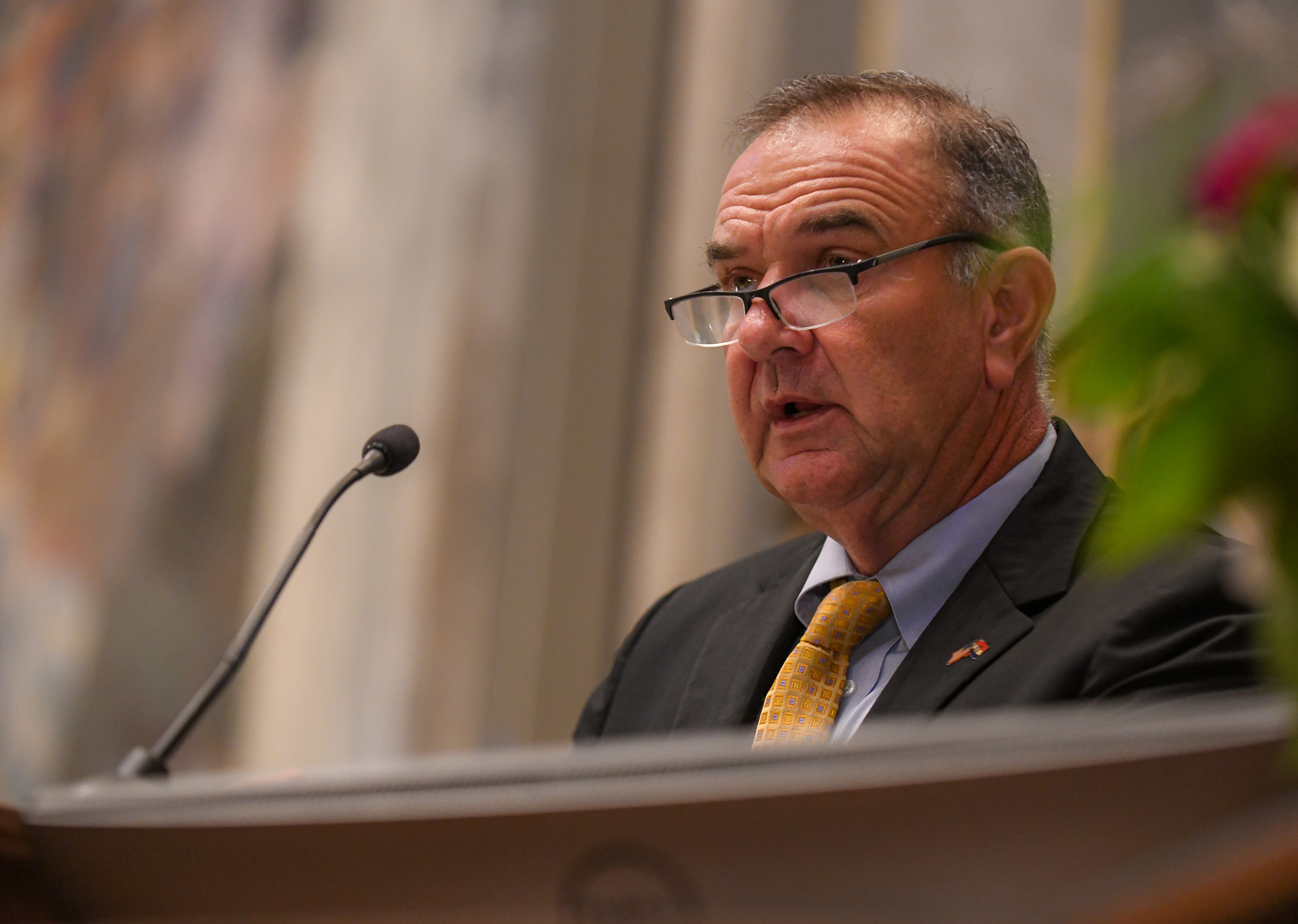 Julie Smith/News Tribune photo: Lt. Gov. Mike Kehoe is shown at the dais Wednesday, Sept. 14, 2022, during proceedings in the senate chamber. The Missouri Legislature went into special session followed immediately by veto session, which lasted only a few minutes before adjourning for the day. 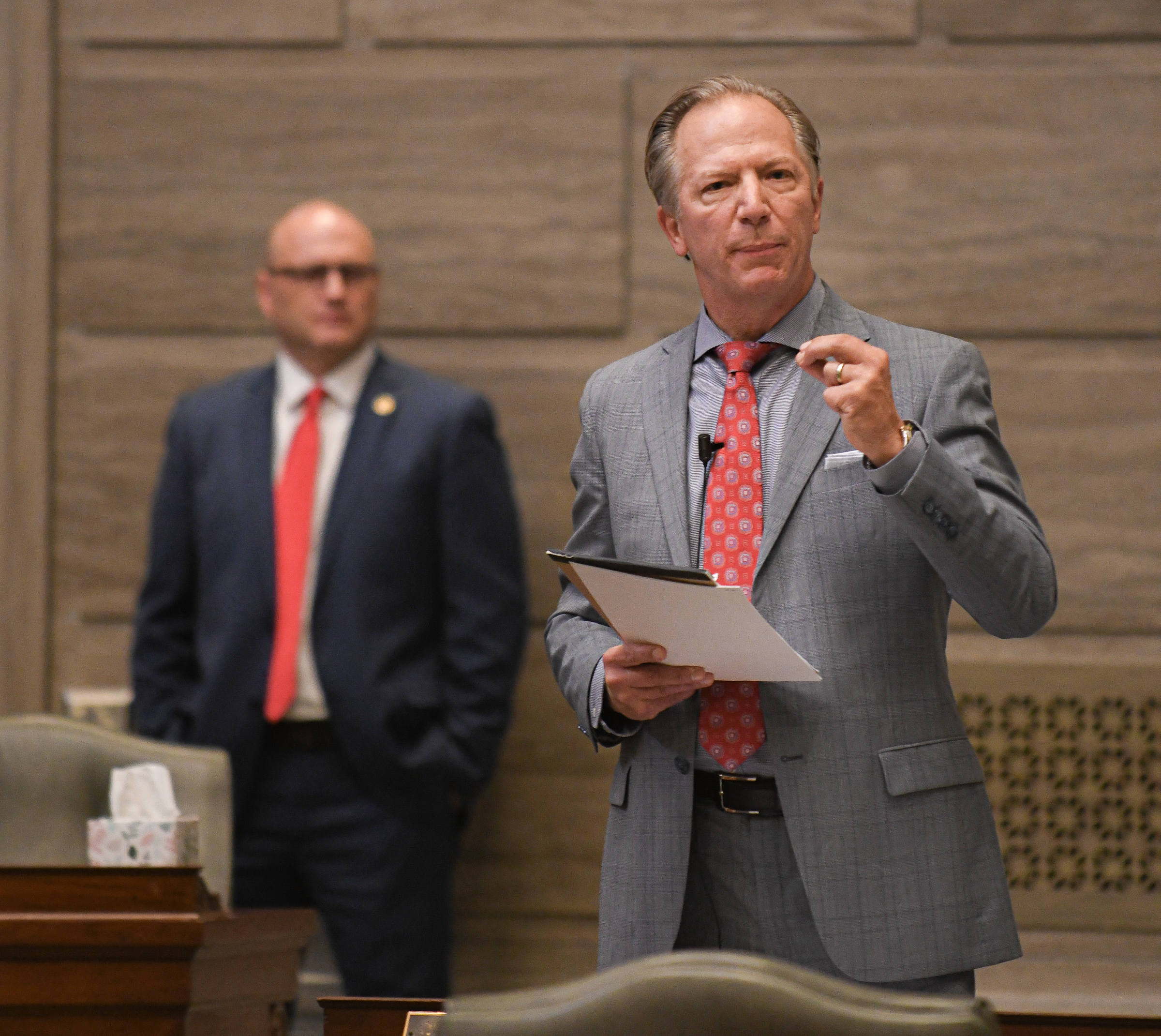 Julie Smith/News Tribune photo: Sen. Denny Hoskins, R-Warrensburg, in background, listens as Sen. Bob Onder, R-Lake St. Louis, talks details on one of the pieces of legislation he put forth in this year's special session of the Missouri legislature. The House and Senate returned to the Capitol Wednesday, Sept. 14, 2022, for the veto session, which immediately followed this special session.