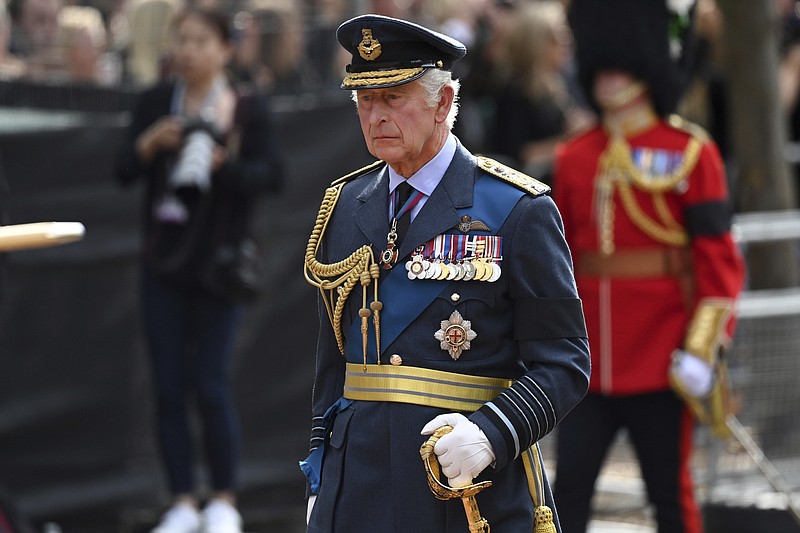 Britain's King Charles III walks behind the coffin during the procession for Queen Elizabeth II, in London, Wednesday, Sept. 14, 2022. The Queen will lie in state in Westminster Hall for four full days before her funeral on Monday Sept. 19. (Kate Green/Pool Photo via AP)

LONDON (AP) -- Reports that up to 100 staff at King Charles III's former residence could lose their jobs have drawn criticism of the British monarchy, within days of his accession to the throne.

The Guardian newspaper reported Tuesday dozens of staff at Clarence House, Charles' former official residence, were given notice their jobs were on the line. The report said the notices came in the midst of a busy period of transition as Charles and his wife Camilla, the queen consort, move to Buckingham Palace after Queen Elizabeth II's death Sept. 8.

The Public and Commercial Services Union called the royals' decision to inform staff of job cuts during a period of mourning "nothing short of heartless."

"While some changes across the households were to be expected, as roles across the royal family change, the scale and speed at which this has been announced is callous in the extreme," said Mark Serwotka, the union's general secretary.

Britain is in a national period of mourning until Monday, when the queen's state funeral will be held.

In a statement, Clarence House said following Charles' accession, operations of his and Camilla's household "have ceased" and "as required by law, a consultation process has begun."

"Our staff have given long and loyal service and, while some redundancies will be unavoidable, we are working urgently to identify alternative roles for the greatest possible number of staff," the statement added.

The Guardian said one unnamed member of Charles' staff told the newspaper "everyone is absolutely livid ... people were visibly shaken by it."

The criticism added to negative press for the 73-year-old monarch after two videos showing him visibly irritated by a leaky pen and a pen holder went viral on social media in recent days.

In one video, Charles was seen losing his temper at a leaking pen while he was signing a visitors' book in front of cameras in Northern Ireland, where he was visiting Tuesday on the latest leg of his royal tour of the U.K.'s four nations.

Charles was heard exclaiming "Oh god I hate this!" and muttering "I can't bear this bloody thing ... every stinking time."

The video came after another pen-related incident Saturday, when the new monarch was seen gesturing in irritation at his staff when a pen holder got in his way as he signed a document during his accession ceremony.

Charles has been under intense media scrutiny and had a grueling schedule since his mother's death in Scotland. He and Camilla flew from Scotland to London for his accession ceremony and a visit to Parliament to address legislators, before flying back to Scotland where he walked behind the queen's coffin.

He then jetted to Northern Ireland on Tuesday and returned to London the same night, in time for the procession of the queen's coffin from Buckingham Palace to Westminster Hall on Wednesday. 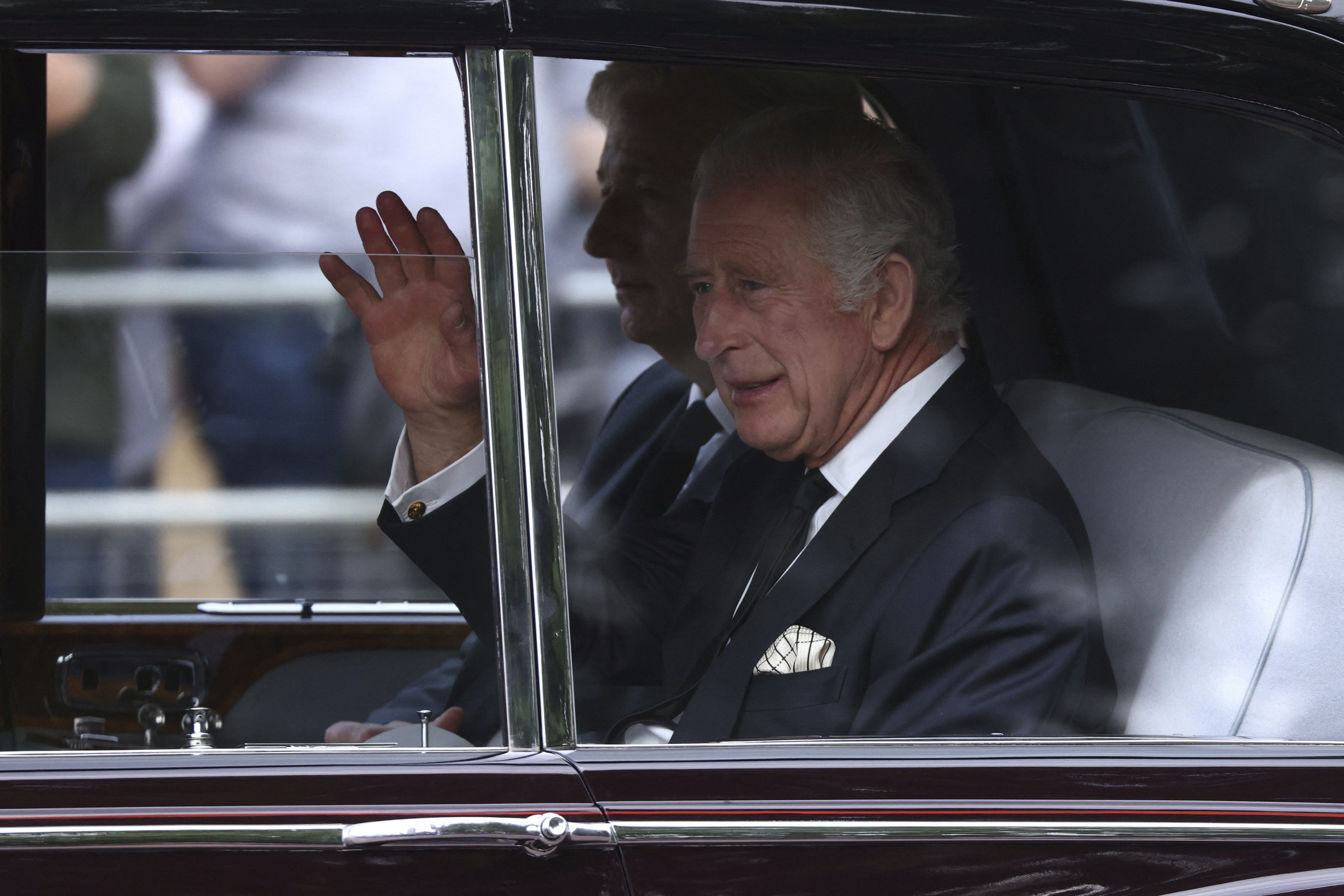 King Charles III waves as he arrives at Buckingham Palace ahead of the ceremonial procession of the coffin of Queen Elizabeth II, from Buckingham Palace to Westminster Hall, in London, Wednesday Sept. 14, 2022. The Queen will lie in state in Westminster Hall for four full days before her funeral on Monday Sept. 19. (Tom Nicholson/Pool Photo via AP) 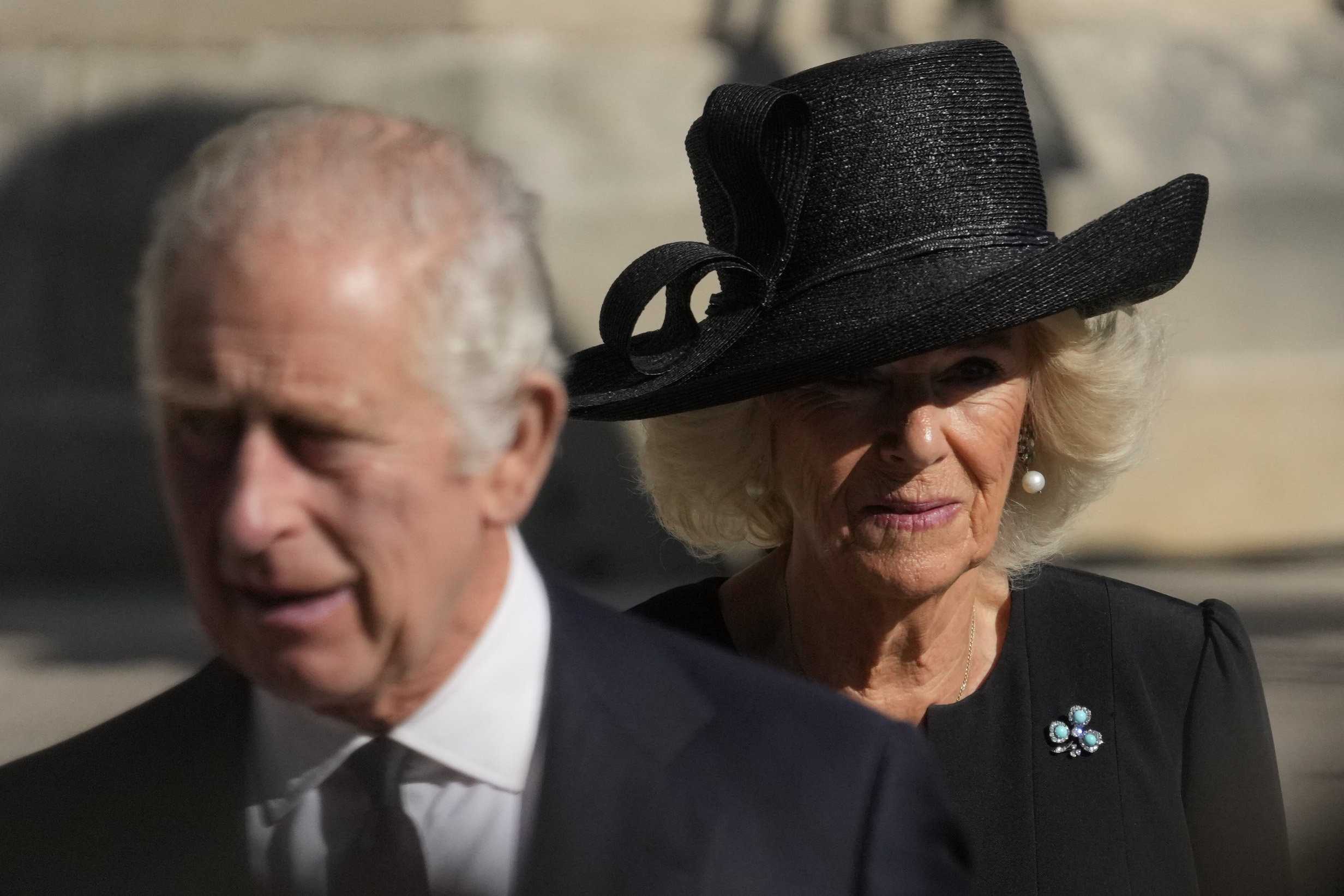 Camilla, the Queen Consort, and Britain's King Charles III leave the St. Anne's Cathedral at the end of a Service of Reflection for the life of Her Majesty The Queen Elizabeth in Belfast, Tuesday, Sept. 13, 2022. (AP Photo/Gregorio Borgia) 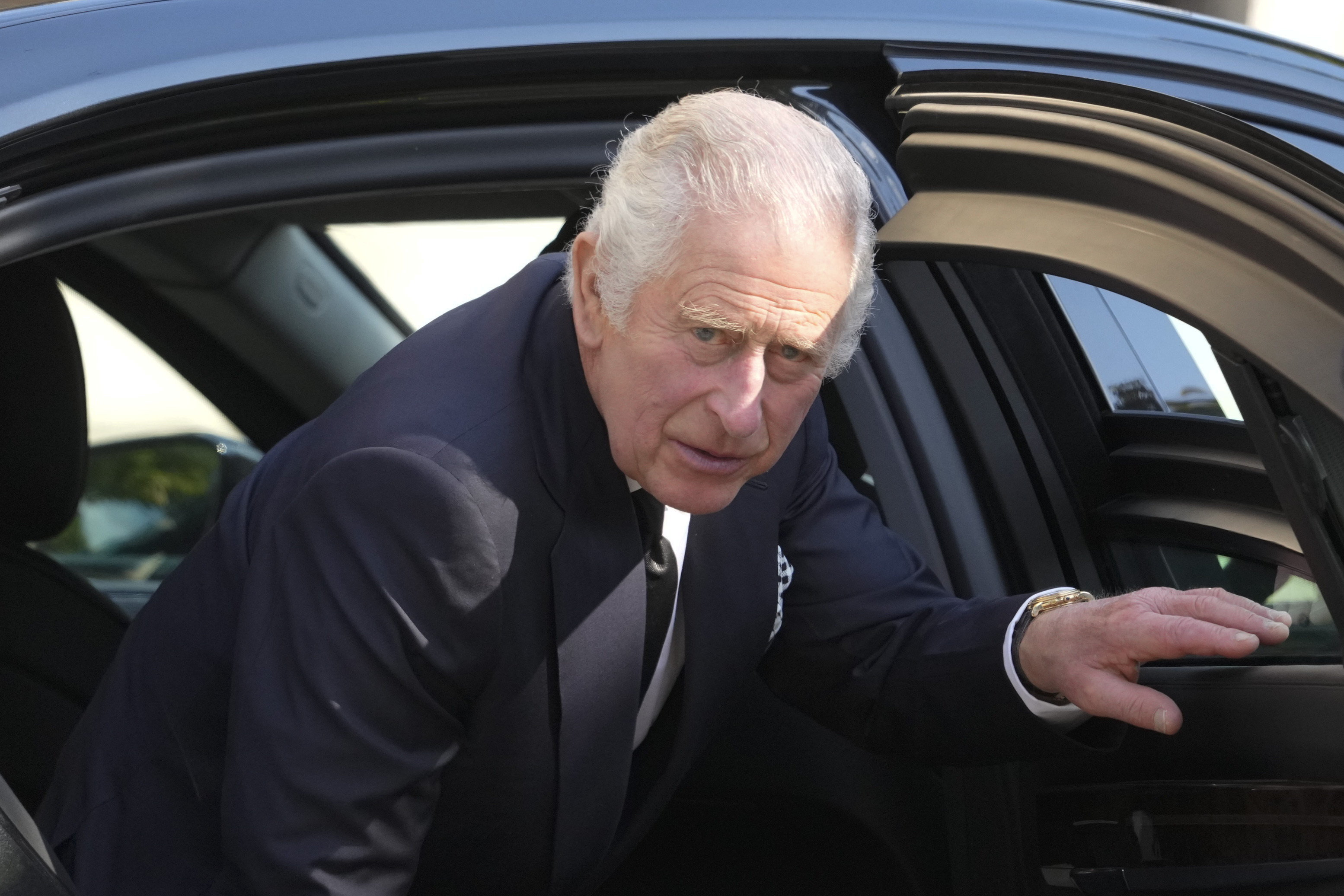 Britain's King Charles III and Camilla, the Queen Consort, arrive at the St. Anne's Cathedral to attend a Service of Reflection for the life of Her Majesty The Queen Elizabeth in Belfast, Tuesday, Sept. 13, 2022. King Charles II was in Scotland on Monday accompanying his mother's coffin, and he will visit Northern Ireland and Wales later in the week, attending memorial services in Belfast and Cardiff. (AP Photo/Gregorio Borgia) 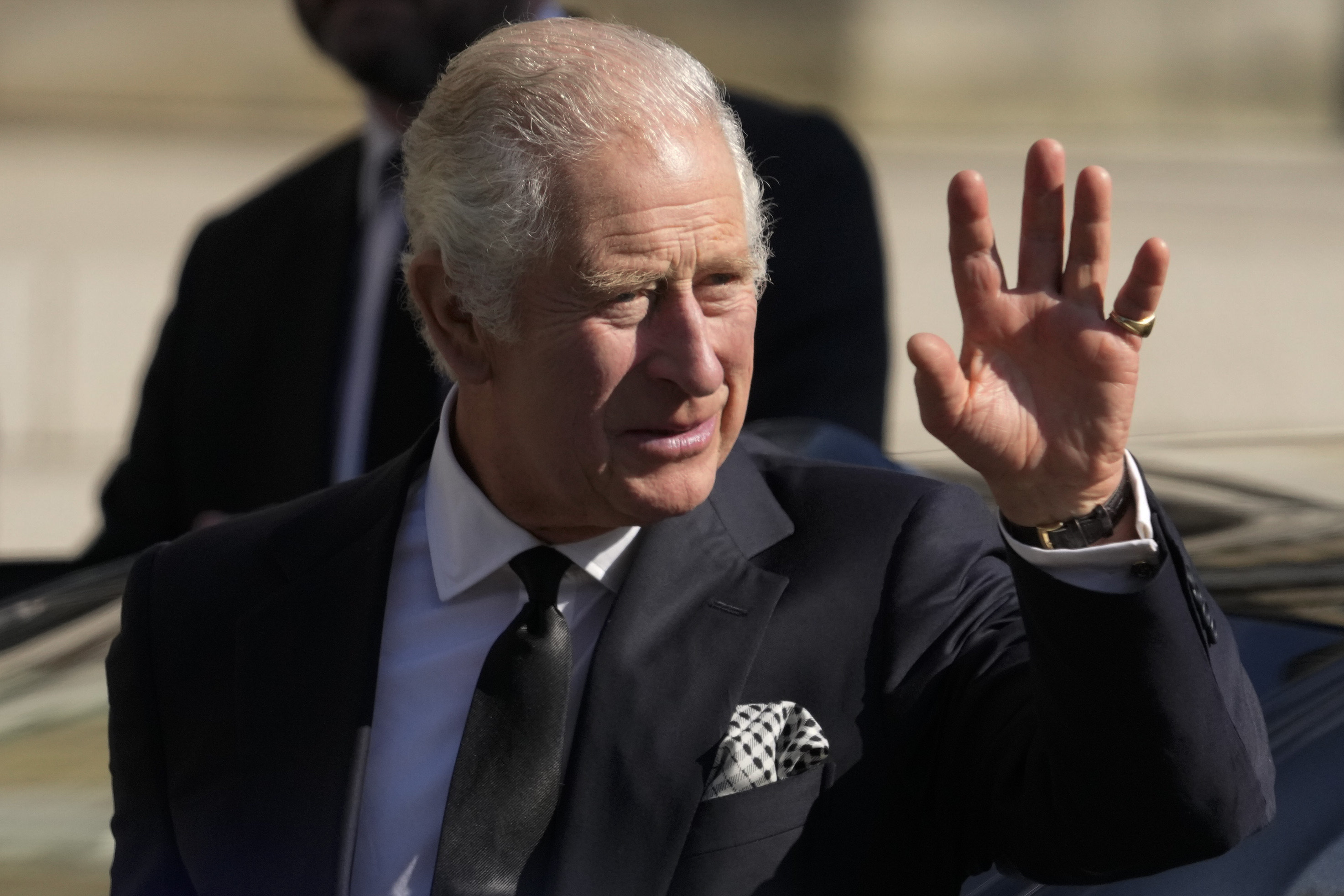 Britain's King Charles III waves to members of the public as he arrives at St. Anne's Cathedral to attend a Service of Reflection for the life of Her Majesty The Queen Elizabeth in Belfast, Tuesday, Sept. 13, 2022. King Charles III and Camilla, the Queen Consort, flew to Belfast from Edinburgh on Tuesday, the same day the queen’s coffin will be flown to London from Scotland. (AP Photo/Gregorio Borgia)