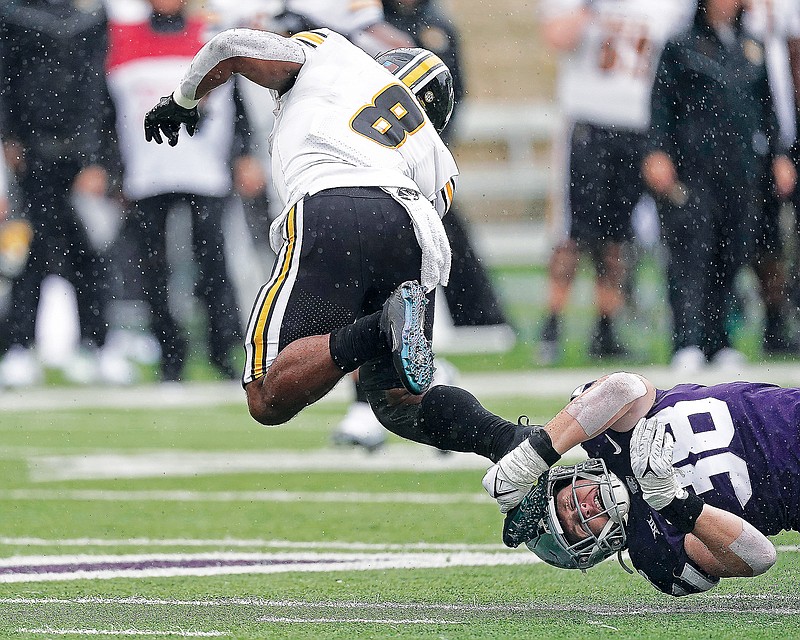 Kansas improved to 2-0 for the first time in more than a decade by squeezing out a victory at West Virginia, a win highlighted by a clinching pick-six in overtime.

Iowa State also went on the road and ended a six-game skid against its biggest rival, Iowa.

There was Kansas State walloping ex-Big 12 rival Missouri to stay perfect through the first two games of the season, and Texas Tech, which beat then-No. 25 and future conference foe Houston to likewise stack two wins together.

Pretty salty stuff from what were supposed to be the Big 12 also-rans.

“We know this program has struggled to get wins,” Jayhawks coach Lance Leipold said after the 55-42 win in Morgantown, their first there after six consecutive losses. “This is a group that’s been bruised mentally a lot, and they’re starting to gain some confidence and believe in one another. Confidence in the system and how we’re going about it.

“This,” Leipold said, “is one you hope we are going to build upon.”

There are a lot of coaches feeling the same way this week.

Texas took then-No. 1 Alabama to the wire in a loss, even after losing their starting quarterback to injury, and Baylor fell to No. 12 BYU on the road in overtime. But even in defeat, they were strong efforts by programs that, along with Oklahoma and Oklahoma State, were expected to be the cream of the Big 12 crop this season.

Yet it was the remaining schools in the conference that showed how deep the league might be.

Iowa State thought its breakthrough was going to come last season, when it returned most of the key players from a 9-3 team that had just won the Fiesta Bowl. But the Cyclones never quite got on track, won just seven games -- disappointing by the standards Matt Campbell has brought to Ames -- and the expectations heading into this season were tempered.

If a rout of Southeast Missouri State in their opener didn’t raise them, the Cyclones’ win in Iowa City might have done it.

They shut down an impotent Hawkeyes offense, then put together a 99-yard touchdown drive in the fourth quarter, before a few more defensive plays in the waning minutes preserved a 10-7 victory.

“It’s a game of imperfection,” said Campbell, whose team gets Ohio on Saturday before beginning Big 12 play. “For our kids to have the character and resiliency to keep playing, those are traits that will continue to serve us well.”

The Wildcats didn’t need a whole lot of resilience in the first meeting with Missouri since it bolted for the SEC -- and left the Big 12 in a precarious lurch -- prior to the 2012 season. In fact, the only resistance Kansas State faced all day came from the weather, which included torrential downpours and an hour-long delay for lightning in the first half.

Kansas State led 14-3 at that point. It was 20-3 at halftime. The margin of victory, 40-12, was enough to raise eyebrows around the country, though the folks who follow the Wildcats closely know this could turn out to be a special season in Manhattan.

“We have a good football team, but we have a lot of guys with a chip on their shoulder,” said Wildcats coach Chris Klieman, whose team plays Tulane on Saturday before a showdown with the Sooners. “We think we can be a really good team.”

That same positive vibe is running through the Red Raiders, who have rallied around first-year coach Joey McGuire to beat Murray State and then knock off the Cougars in double overtime. Texas Tech got a 47-yard field goal from Trey Wolff to force the extra sessions, then twice answered Houston scores with touchdowns to escape with the 33-30 win.