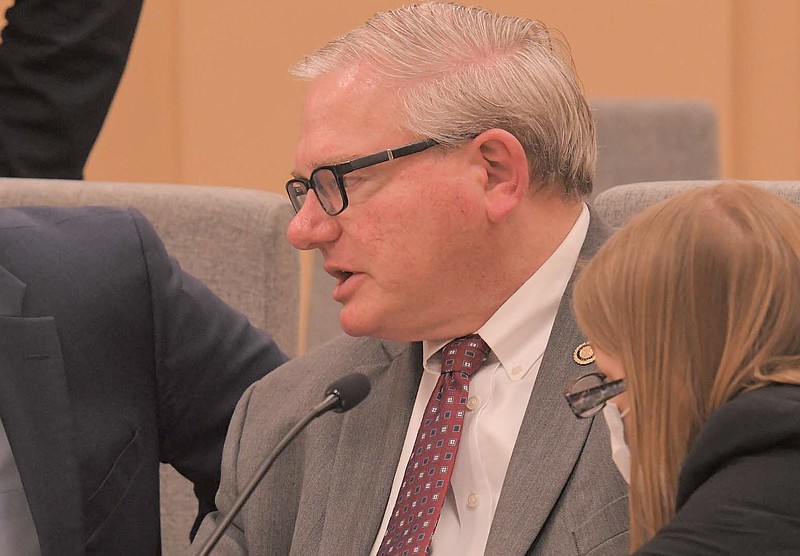 Sen. Dan Hegeman, R-Cosby, has a discussion May 5, 2021, during a budget hearing at the Missouri Capitol. (Courtesy/Tim Bommel, House Communications)

Missouri legislators return to the Capitol today for a combined veto and special legislative session aimed at a $700 million tax cut.

Members of the state House and Senate will consider the tax cut along with agricultural tax credits and legislation Missouri Gov. Mike Parson vetoed last session. Originally scheduled to begin Sept. 6, lawmakers delayed the start of the session by a week to continue negotiations.

Veto sessions occur each year on the first Wednesday after the second Monday in September. They can last up to 10 days, according to the Missouri Constitution.

It's a chance for legislators to override the governor's veto power exercised on legislation passed during the most recent legislative session.

Parson vetoed 12 bills this year and signed nearly 50 into law.

Of the 12 vetoed bills, 11 came from the House and eight were partial rejections of appropriation bills. One vetoed bill came from the Senate. The rejected bills touch a wide array of topics from county financial statements to regulations on kratom, an herbal substance that can produce opioid- and stimulant-like effects.

Vetoed bills go back to the chamber they originally came from and require support from two-thirds of each body to overturn. If legislators have the votes, the bill becomes law despite the governor's objection.

Sen. Dan Hegeman, R-Cosby, sponsored the only Senate bill to be vetoed and wrote in a letter to constituents he has no intention to bring it up for override consideration because he agrees with the assessment Parson gave in his veto letter.

Two of the bills Parson vetoed are the basis for the special session.

Upon rejecting the bills, Parson said he would call a special session so lawmakers could pass permanent tax relief and longer extensions on the agricultural tax credits. He signed a proclamation calling the special session Aug. 22.

Special sessions occur less regularly and are focused on specific topics the governor puts in his call for a special session. They're becoming more common in Missouri, however, with at least one being called every year since 2017. A total of 17 extraordinary or special sessions have been called since 2000.

In the most recent call, Parson is asking lawmakers to reduce the top individual income tax rate from 5.3 percent to 4.8 percent, increase the standard deduction by $2,000 for individuals and $4,000 for joint filers, and eliminate the bottom income tax bracket. The call also includes extending tax credits for four agricultural programs for at least six years and creating four new agricultural tax credits.

Parson has been laying the groundwork for the legislation and meeting with Democratic and Republican lawmakers in both chambers, as well as agricultural groups and economic policy groups.

Legislators asked the governor to modify his call for the session to include legalization of recreational marijuana, but he denied the request.

The General Assembly is prohibited from acting on subjects not specifically designated in the governor's call for a special session or a special message to the Legislature after it has convened, according to the state Constitution.

Parson told reporters when announcing the date for the special session that he wanted both the tax cut and agricultural tax credits to be a single bill originating in the Senate.

"We're trying to make this process as simple as possible," he said. "If we put it in one bill, we can control that to know what's exactly in that bill and we really want the public to understand exactly what we're doing here."

Parson said the two issues legislators will consider are popular and should have a path forward in the Republican-dominated General Assembly.

"I hope they can get done pretty quick," he said.

But the timeline Parson offered when announcing the session is already off track. He suggested the Senate could be done with committee work on the bill by the start of the veto session.

When legislative leaders announced they were delaying the session start date, Senate Majority Leader Caleb Rowden, R-Columbia, said negotiations are off to a positive start.

"It was a productive conversation, and I certainly believe we have a path to provide meaningful tax relief to Missourians and continue to stand for our Missouri farmers," Rowden said. "One point of agreement we came to was, given the nature of the scope of what we are doing here, giving more time for us to get it right was needed."

At least two proposals -- one from House Budget Chair Cody Smith, R-Carthage, and one from Sen. Lincoln Hough, R-Springfield, -- are expected to be introduced today, the St. Louis Post Dispatch reports. Their proposals potentially include phased-in tax cuts that go beyond 4.8 percent and tax cuts for businesses.

Americans for Prosperity Missouri, a libertarian-conservative political advocacy group, is planning a "Real Tax Cut" rally from 1-2 p.m. today outside the Capitol. Missouri law already provides a tax cut down to 4.8 percent over several years, the group claims, and "that means a real tax cut will be anything below 4.8 percent."

The group, which is considered one of the most influential American conservative organizations because of its ties to the Koch brothers, is also opposed to the agricultural tax credits.

"Americans for Prosperity opposes picking winners and losers and the cronyism that goes with it," their rally registration website states.