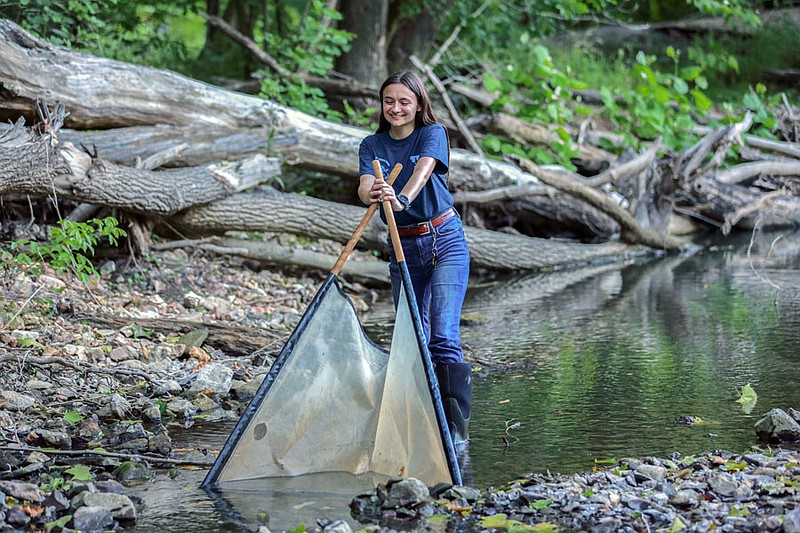 The Stream Team coordinator biologist of the Southeast Region has only been working on the Missouri Conservation Department’s Stream Team for slightly more than a year, but she said it’s been a perfect fit.

“I love it. It’s exactly where I was meant to be, which is crazy because I really didn’t see it coming,” Arrigo said.

Primarily a volunteer driven program, the Stream Team’s mission is to teach the public about the health of the state’s streams, how stream health impacts their everyday life, and how to get involved to enjoy and protect those streams.

Stream Team coordinators provide volunteers with training, resources and tools to monitor stream health and send reports back to the Missouri Department of Natural Resources. Volunteers learn how to deploy kicknets to measure the number of macro-invertebrates — or bugs — at a site, which can tell Stream Team biologists a lot about the health of a given stream.

“If we only find one or two different types of bugs, that might indicate we need to look at other factors such as the chemical parameters in the stream,” Arrigo said.

“We breath air, and the bugs in the stream breath air as well — it’s just dissolved in the stream. If there’s a lot of oxygen available, that’s good for them,” she said. “And if we see very few bugs and very little dissolved oxygen, we’re like, ‘OK, something’s wrong here. What can we do to fix it?’”

Volunteers will pick a site they’re interested in and monitor twice a year in the spring and fall to avoid faulty measurements, as macro-invertebrates tend to die off in the summer. They’ll learn the beginnings of chemical analysis and how to measure for dissolved oxygen and nitrate at their site.

Participants are also encouraged to clean creeks or streams of their choice with guidance from MDC, which will provide them with gloves and trash bags.

A love of the outdoors

Arrigo didn’t originally see conservation work as a career path, but she grew up with a love of the outdoors. Her father worked for Missouri State Parks and frequently took her fishing and exploring.

She was also involved in Earth’s Classroom, a nonprofit organization in Rosebud dedicated to providing science and historical education as well as outdoor adventure experiences.

“They’re family friends, so as a kid I was always going to their events. We were canoing, doing stream-side activities, looking for frogs. So, I did a lot of that stuff as a kid.”

Her interest in the outdoors continued through high school, where she worked as a cave guide at Onondaga State Park.

“I wasn’t interested in conservation until I worked there. I loved being outside, but I thought I was going to go into something drastically different, like musical theater,” Arrigo said.

She also worked at Meramec State Park as a seasonal naturalist during college, where she gave evening programs for the public on stream ecology and caves. She also presented programs on bats and stargazing — and any subject she thought might interest the public.

“It was so close to my house that every single day when I got off work, I would stash my kayak under the deck of the visitor center, and I would kayak 3-5 miles after work every day. I loved it. I loved being outside. I specifically loved being by the water, and I learned so much about the local ecology,” Arrigo said.

It was the perfect summer job, but she didn’t see it as a career path yet.

“I thought I’d just be educating,” Arrigo said. “I didn’t even know that the Stream Team was an option. But it kind of melded my love of the outdoors with speaking and interacting with people.”

A team of mostly women

Arrigo was working as a naturalist with MDC when a training program for the Stream Team opened. Although she had volunteered with Stream Team briefly when working at Onondaga State Park, she signed up for the training to teach the public more about Missouri streams.

So when the Stream Team coordinator position was available, Arrigo applied and got the job.

“It’s been amazing. MDC has made a big push lately toward diversity and inclusion, and I love it. In the past, it was mostly men (in conservation). Especially recently, we’ve been seeing whole women teams for the first time,” she said.

In 2016, MDC announced its first female director, Sara Parker Pauley, in its more than 80-year history.

For Arrigo, working with a team of mostly women means more than just representation. It has directly impacted her working environment for the better.

“I think my whole team is intuitive. We’re always thinking, ‘If I change this part of the program, how is it going to affect everybody that we work with?’ I don’t know that we would have that if we didn’t have so many female members on our team,” she said.

In the past, it hasn’t always been so inclusive. Arrigo described previous jobs outside of MDC where seeing women in conservation positions was met with disbelief.

“I’d step out of my truck in my full uniform and people would be like, ‘Wow, how’d you get this job?’ They just don’t see women in positions like that,” she added.

Arrigo also described past situations where people would say that something is harder than it is or make microaggressions, especially to women.

“Nobody will say right to your face, ‘Oh, you’re a woman, should you be in this job?’ It’s more like, ‘Oh there’s snakes, are you sure you can handle that?’ You wouldn’t say that to a man,” she said.

Luckily, Arrigo hasn’t encountered that at MDC, and she thinks that can be directly linked to having female leadership. She also encourages other women to get involved in conservation efforts.

“There will be challenges; it’s not easy,” she said. “But it’s so rewarding.