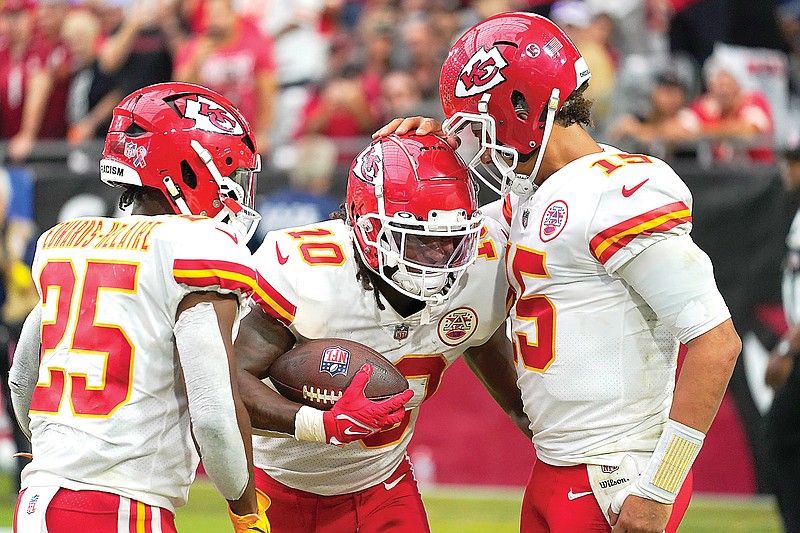 Chiefs quarterback Patrick Mahomes celebrates after running back Isiah Pacheco (center) scored a touchdown against the Cardinals during the second half of Sunday’s game in Glendale, Ariz. (Associated Press)

KANSAS CITY -- It’s sometimes difficult to believe Kansas City Chiefs quarterback Patrick Mahomes, for all he has accomplished during his young but brilliant NFL career, would carry such a considerable chip on his shoulder.

He thrives on the doubters. The naysayers. The critics who try to diminish everything he’s done.

It was that way when he was coming out of high school, and Texas Tech was among the only schools that gave the baseball player a football scholarship. And coming out of Texas Tech, when so many NFL teams pegged him as a system quarterback who would flounder like so many other “Air Raid” products as a professional.

It was that way this past offseason, too, when detractors tried to argue Mahomes would take a step back without the game-breaking ability of Tyreek Hill, who was shipped to the Dolphins for a package of draft picks.

So much for that.

Mahomes merely responded by throwing for 360 yards and five touchdowns without an interception Sunday in Arizona, a performance that was so nearly flawless, the Chiefs built a big enough lead he could ride the bench at the end.

“That’s just Pat. That’s just who he is,” Chiefs offensive coordinator Eric Bieniemy said this week, after they had turned their attention from the 44-21 blitz of the Cardinals to a Thursday night showdown against the Los Angeles Chargers.

There was one point during the game when Mahomes, after throwing his fourth touchdown pass, put up four fingers at a woebegone defender, as if to say: “How ‘bout that?” It was done in the heat of the moment, and Mahomes said Tuesday he didn’t even remember doing it. But it spoke volumes about his competitive fire.

“There’s always that behind-the-scenes moment he’s going to create that keeps him fired up and energized,” Bieniemy said. “The kid is a tremendous football player. I love the energy and excitement he brings. And he’s the ultimate competitor.”

It’s something Chiefs coach Andy Reid identified a half-decade ago, when they traded up in the first round to make Mahomes their quarterback of the future. They were traits similar to those Reid saw while coaching Brett Favre in Green Bay, Donovan McNabb and Michael Vick in Philadelphia and Alex Smith in Kansas City.

“The way he approaches football is important,” Reid said. “If you ask him, family and football are right at the top of the things he does. Whether he does a commercial or whatever, he’s going to put football at the front. It’s not going to disrupt what he’s doing. And as you know, he’s extremely smart. His recall is exceptional. His attention goes with that.

“You tell him something once,” Reid said, “and he’s got it.”

The same goes if you slight him once. He’s going to remember it.

“I mean, you always feel like you have more to prove,” Mahomes said. “I promise, Tom Brady’s feeling like he has more to prove, and I think that just comes with any sport, any competitor. If you’re not getting better, you’re getting worse. And they build you up to tear you down, and you got to kind of know that. For me, it’s all about, ‘How can I make myself better?’ Not what other people say. ‘How can I make myself better so we can go out there and win football games?’”

Mahomes is coming off his sixth career game with at least five TD passes, joining a club that includes Drew Brees, Peyton Manning, Dan Marino and Ben Roethlisberger. Each of them played at least 240 games; Mahomes has played 64.

He’s also closing on 20,000 yards for his career -- he needs 649 more -- a number Mahomes could reasonably achieve in two games. That would mean reaching the threshold in 66 games, five fewer than the NFL record.

“I’m glad that he’s on our side,” Bieniemy said, “and just looking forward to watching him do work from here on out.”

Notes: CB Trent McDuffie was placed on injured reserve with a hamstring injury, meaning he will be out at least four weeks. … K Harrison Butker (ankle sprain) did not practice Tuesday and appears unlikely to play Thursday night. The Chiefs signed former Jets K Matt Ammendola to their practice squad to provide insurance. “We’ve got the Plan B. We’re working on it,” Reid said. “We’ll see if that’s where we go with it.” … OL Trey Smith (ankle) and WR Justin Watson (chest) are expected to play. … The Chiefs activated practice squad LBs Jack Cochrane and Elijah Lee. They also signed CB Dicaprio Bootle and WR Corey Coleman to the practice squad and released FS James Wiggins.