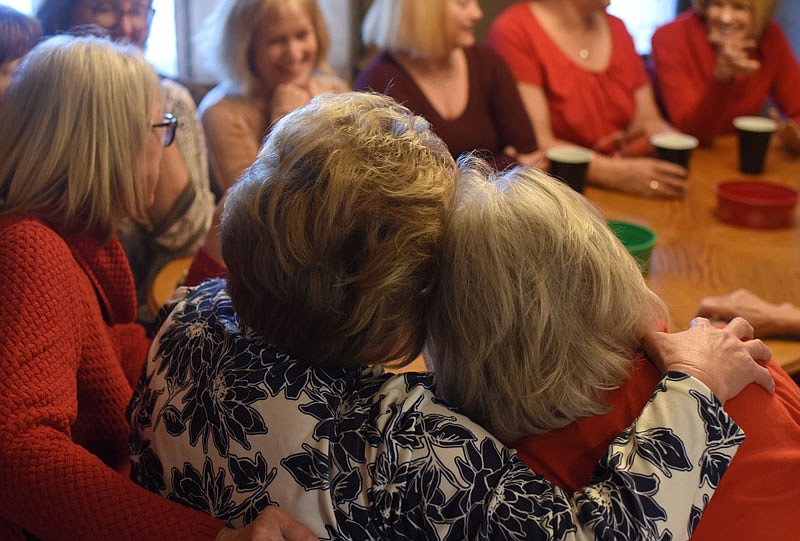 Members of the Break Group gather at Carol Luecke’s house.

A group of 13 mostly retired women met at Carol Luecke’s house, a tray of food laid out in the kitchen and everyone gathered around a table — that’s when the stories started.

When I walked in, they sat me down with a plate of food and started talking about the Bible, swapping stories about the grandkids and old friends, and naturally, the conversation arrived back to where it all began: the Break Group.

The story goes that the group started in 1969 on the Division of Employment Security’s lunch break. The Break Group has served many purposes for its members. At the start, it was a place to sit in the cafeteria of the DES building to crochet or swap stories. Over time, it moved out of the cafeteria and into the lives of each member — a friendship of hardworking management who knew how to laugh and cry together, who built a sisterhood in the middle of their 9-to-5.

Most of the women lived out of town, so they took lunch there — “When the bell rang for lunch, we were out the door,” one member said. It was “more of a sorority,” they said, as women in management in DES outnumbered men.

The group would later take their lunch downtown, walking to High Street in their high heels, or heading to St. Peter Catholic Church on Holy Days. Then after a while, they simply had too much fun and started gathering after work, too. They attended pool parties, dinners, outings to surrounding towns, tea parties, volleyball and dance classes, some hosted by women in the group. 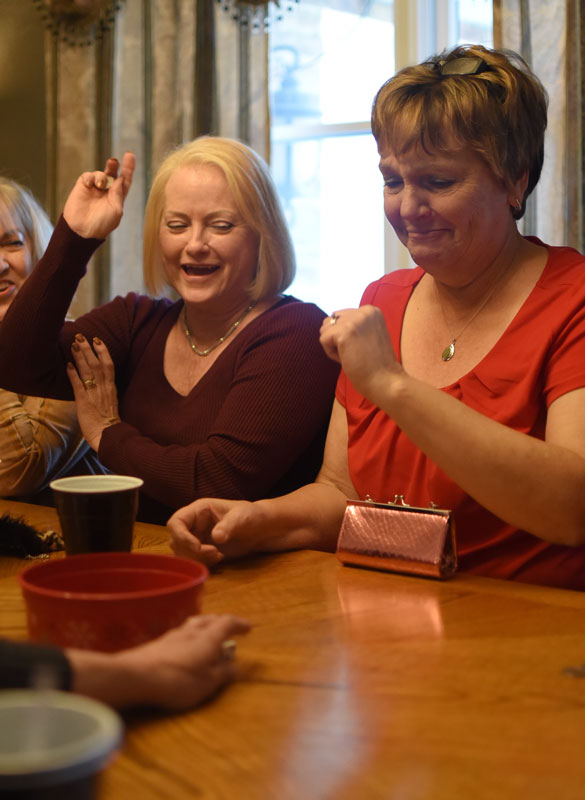 Mary Luecke, right, and Diane Nilges play a game during a gathering of the Break Group.
By India Garrish

Describing their schemes, they fondly remember learning the Electric Slide during a lunch hour. The room roared with laughter, and they passed around quarters to play Quarter Pass (also called Left-Right-Center), which they specified “is not the drinking game” — and continued the Break Room lore.

The Break Group saw the changes in the working world together: Those working at DES in the 1970s remembered when smoking in the office was banned and when dresses were no longer required for women, making way for pantsuits on Casual Fridays. They remembered disparities in women’s working conditions: One of the members was the first woman on the team to have maternity leave.

They’ve also been there for one another through good times and bad outside the office walls. When there were losses of spouses, grandchildren born, weddings, funerals or surgeries, they would pray for each other. As technology expanded, the friends started a GroupMe devoted to praying for each other.

Someone would start with Hail Mary — “Hail, Mary, full of grace, the Lord is with thee. Blessed art thou amongst women and blessed is the fruit of thy womb, Jesus…” — and another person would message the next part of the prayer.

“Once you’re in the group, you’re in it, for better or worse,” one member told me.

As quarters continued to be passed into a bucket around the table, the women celebrated wins and losses together. When one person would gain the other persons’ quarters, there was teasing but also encouragement for those who were losing.

The room erupted with laughter as the stakes grew higher and more quarters were lost. Nathan Lansford, the only male in the group and their official photographer, laughed.

“I used to think my friends were crazy, then I hung out with (this group),” he said.

The group has a way of picking up the pieces of life, wherever they may fall, and going through them together. Carried on a wave of joy and laughter, they also journey through currents of grief.

Judy Spiedel remembers, in 2020, when she had surgery, the members would come stay in the hospital with her, trading shifts as visits from non-family members were more restricted. The GroupMe chat also came in handy.

“I had friends who prayed for me through texts from the time I left my house till when I got into surgery,” she told me. “It was amazing — that’s the caliber of these people.”

Another responded: “Maybe that’s why we’re all together: Friends that pray together stay together.”

All but two members have retired from DES, but they still meet faithfully to keep living life together. It started huddled around a cafeteria table — because noise travels in the government building — to chairs in Luecke’s dining room, sides splitting from laughter. They know the group wouldn’t have happened without that hour lunch break, and it might not happen the same way again.

“There was a whole community atmosphere of friendship back then; that changed as cellphones were introduced,” one member said.

They continue to celebrate each other in retirement, rallying each other to keep meeting and trying new adventures.

They even invited me to come back sometime — “you’re in it, for better or worse,” they repeated.