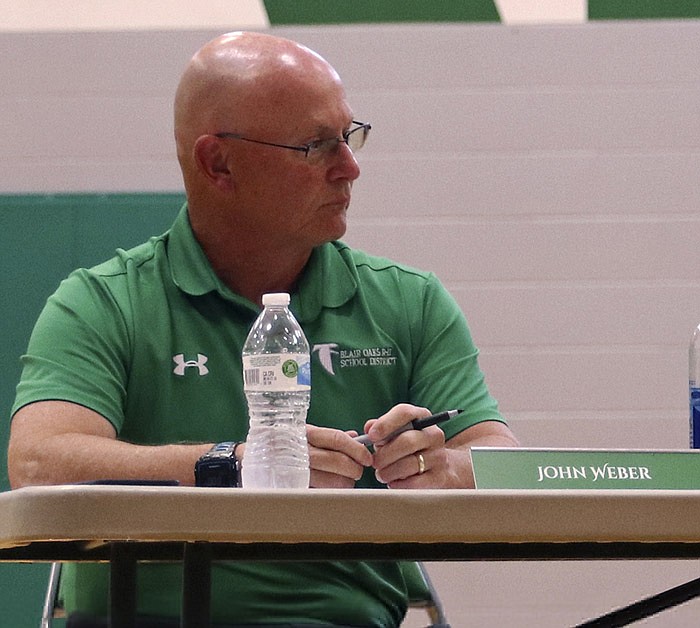 The Blair Oaks School Board decided to remove Policy 2115 at its September meeting following months of community feedback both for and against it.

Policy 2115 allowed transgender students to choose a name and pronoun by which to be identified and to dress according to their gender identity. It also allowed all students to use restrooms that are gender-neutral, aligned with their "biological sex" or aligned with their "self-identified gender." It also outlined Missouri State High School Activities Association rules for transgender athletes.

Fellow board member John Weber said he felt that one way or the other, the role of the board was not to run the day-to-day happenings in schools, and that staff has been addressing the needs of transgender students for years.

Gratz made a motion to remove Policy 2115 and work with legal counsel to make sure existing policy and procedure complies with federal and state law regarding transgender students.

The motion was passed unanimously, which was met with both applause and a disappointed, "No" from those in attendance.

The board also discussed the search process for the next superintendent.

Vice President Nicki Russell suggested the board pay a third party to help the district find its next superintendent by helping with the interview process, posting the opening, and collecting data and feedback on what is needed in the next superintendent.

The board decided to retain the Missouri School Boards Association to assist with the search.

The board heard from Tom Pisarkiewicz of L.J. Hart and Company, who serves as the district's bond underwriter. He said the district could be looking at about 7.5 million dollars in capacity for a bond issue for phase 2 of the high school on the April ballot.

During her report, Assistant Superintendent Kimberley Walters said the goal was to get all the high school classes into the new high school building. Currently, the preliminary budget is close to bonding capacity.

Walters also shared that the village of Wardsville received a grant that could be used to expand Falcon Lane.

In her report, middle school Principal Melinda Aholt shared an update on the new no cell phone policy. Aholt said the policy was going well and it was improving student interactions. So far, she said, there have been three cell phone write-ups.

Aholt also said the middle school is working with a company called Smart Social about how to be safe on social media. Currently, she said, a small group of parents has been watching some of Smart Social's informative videos about social media and providing Aholt with feedback.

Director of Building and Grounds Randy Prenger told the board that crews were making improvements to the bullpen in the athletic complex and would be doubling the size of the batting cage. Crews are also replacing some classrooms locks at the high school.

The board also discussed the possibility of bringing on a new staff member in the future to train with Prenger and eventually fill his role after his retirement.