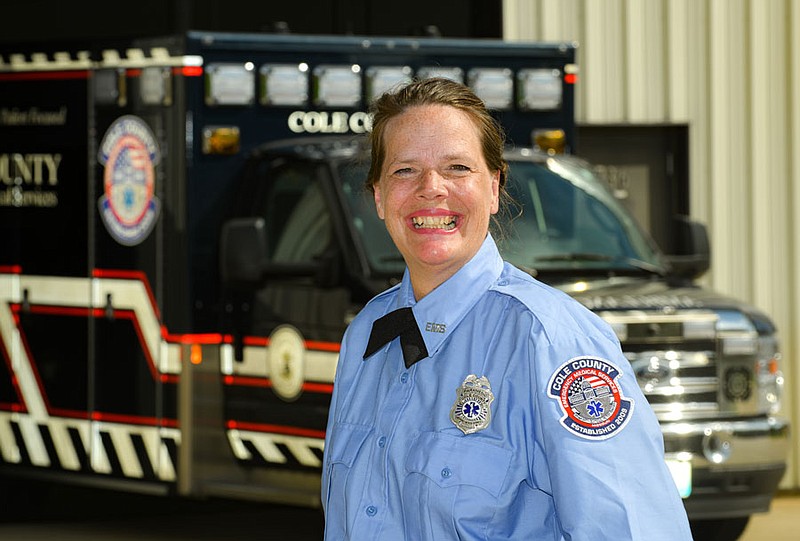 Gretchen Bodley always knew she wanted to be a celebrity. As a child, she aspired to be an actress and even pursued acting as a young adult. Now, a few decades later, her dream of stardom has morphed and manifested into a different type of celebrity — a paramedic.

“(Young girls) are in a daze and in awe, and I would have that gaze and awe if I came across Angelina Jolie or Julia Roberts,” Bodley said. “It’s like being a celebrity but in different form.”

Bodley stands out — not just because of her welcoming smile and outgoing personality. She is one of a handful of female first responders in Jefferson City and Cole County.

Like Bodley, many local women first responders are serving as role models for young girls and women who strive to break the glass ceiling and prove their place within male-dominant professions.

“We are getting out in the community and showing young girls that we are out there, this is a career option and anything is possible,” Lisa Layton-Brinker said. 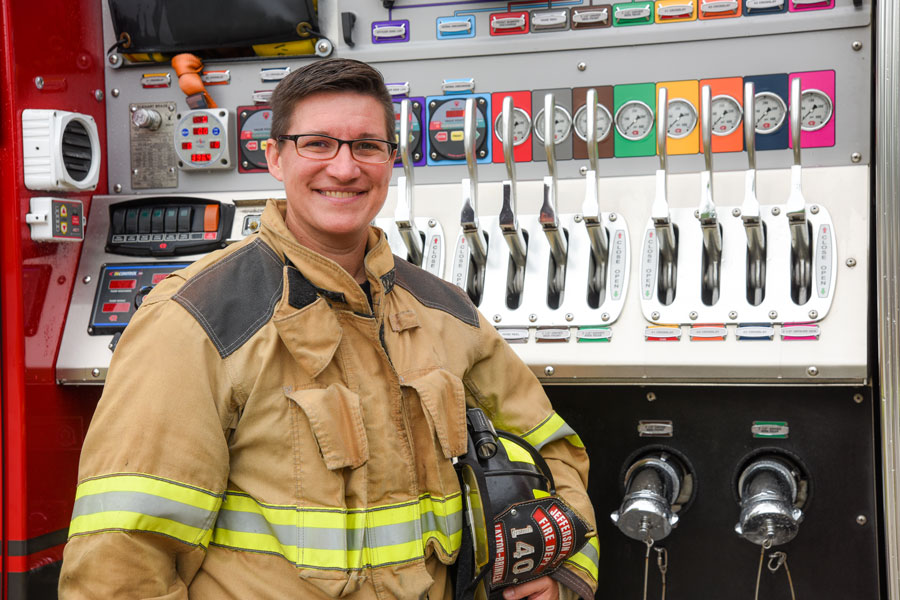 When Layton-Brinker joined the Jefferson City Fire Department 15 years ago, she was the lone female firefighter. As one of four female firefighters with JCFD now, she stressed communication is instrumental when building relationships, comfortability and respect within the workplace.

That is especially pertinent since Jefferson City firefighters eat, sleep and exercise at their designated fire stations during 48-hour shifts.

There have been numerous improvements to privacy and accommodations at the fire stations over the years. Prior to the installation of a second bathroom in Fire Station No. 1, Layton-Brinker half-jokingly recalled doing a headcount of her fellow firefighters before she entered the then single restroom. Since she lives at the fire station during her shifts, she spoke with her captain and fellow firefighters about her need to pump breast milk following the birth of her son six years ago.

Honest conversations are also important when setting personal boundaries, like when it comes to the notorious “locker room jokes.”

Chelsie Heathcoat has heard plenty of jokes in her line of work as one of a few female officers with the Jefferson City Police Department and as company commander for the Army’s military police division in St. Louis. She encouraged women to not shy away from joking along with their male coworkers, but they also need to maintain and communicate healthy limits.

“My coworkers respect it, and they respect me,” said Heathcoat, who joined JCPD two years ago.

While discussing boundaries, restrooms and breastfeeding may be awkward, it ultimately can decrease confusion and lead to more understanding.

“Because you live here with them, you have to have those hard conversations so that everybody is more comfortable,” Layton-Brinker said. “If everybody is uncomfortable, it’s not a healthy work environment.”

While she has been communicative of what she needs, Layton-Brinker doesn’t expect special treatment when it comes to being a firefighter. She, along with Heathcoat and Bodley, exercise with their male coworkers, pass the same tests and ultimately pride themselves on maintaining the same job quality as male first responders.

“You have to carry your own weight, but if you do get in over your head, someone is there to help you out,” Layton-Brinker said.

Once first responders put on their uniforms, Heathcoat added, the stereotypical gender roles “are erased as long as you’re safe and willing to put your life on the line for them.” 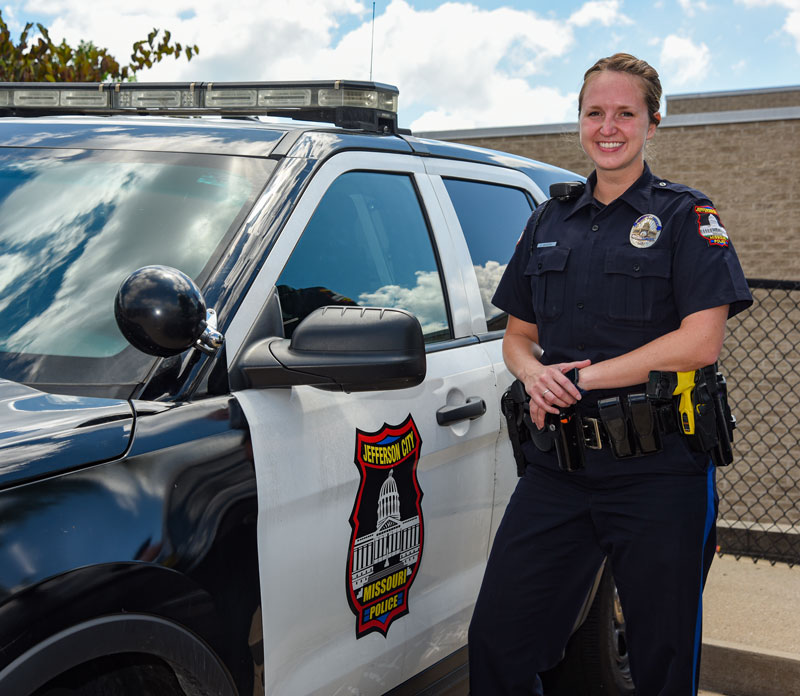 There is no such thing as a “typical day” as a first responder, something all three women enjoy. Bodley may respond to calls regarding a fatal car wreck, a resident experiencing shortness of breath, and an employee who broke a thumb all within a couple of hours. For Heathcoat, she may go from investigating a forgery at a downtown business to chasing down someone with a gun. Layton-Brinker must always be ready to don her 45-pound gear and tackle fires at all hours of the day during her 48-hour shifts.

The fluidity of their jobs leads to a wide spectrum of interactions with Jefferson City and Cole County residents. And while their male coworkers don’t necessarily underestimate their female counterparts, members of the public sometimes do.

Male detainees will try to “sweet talk” Heathcoat or make snide remarks about her gender, she said. Bodley described responding to a call with another fellow female paramedic, and the patient made a comment implying the two women lacked strength.

“You hear comments all the time like ‘Does she know what she’s doing?’” Bodley said. “They are already convinced, and that’s why they made that statement. You acknowledge the statement, and you work past it.”

After such a call, Bodley will analyze why her patient questioned her skills or strength. Maybe the patient had a bad experience when they were last assisted by EMS, or potentially, the patient had never interacted with a female paramedic. The patient’s culture or religion may have contributed to the comment.

First responders must also be subconscious of first impressions like body language, tone and overall energy as they can “make or break” interactions, Bodley emphasized. She often deciphers whether a sexist comment could be attributed to a something she did or said, leaving a negative impression on a patient.

Other times, the public will make comments simply out of bias or naivety. For example, Bodley is called an “ambulance driver” regularly.

“I could have 18 PhDs, but I’m still just an ambulance driver,” she said. “You just smile and keep it moving.”

Biased interactions can be frustrating, the women said, but there are times when having that womanly touch is invaluable. Elderly women appear more comfortable with Bodley running tests or fixing injuries, especially when the women must partially undress. Heathcoat often uses her softer nature when handling sensitive calls involving sexual assaults, domestic abuse and child abuse.

“I try to take lead on those just because I do have more of the softer touch,” Heathcoat said. “The males within my team, they are excellent speakers, but it is that female aspect of nurturing. So, I try to push that a little bit more.”

With that said, the women understand not everyone feels comfortable confiding in female first responders. They must analyze each situation and know when to step up or back off, Heathcoat and Bodley said.

Heathcoat encouraged women to be confident in their skills and trust their guts when interacting with the public.

“You can’t be afraid to act, and I think that was one of the things I really had to take into consideration,” she said. “I’m more of a people pleaser and mediator, but sometimes, you can’t do that — and you have to realize the difference.”

The female first responders are leaving lasting impressions on more than just the adults in the community.

Heathcoat joined the police force to provide a voice for children and be a trustworthy adult figure in their lives. Layton-Brinker answers children’s questions during community events and helps with recruiting firefighters. Bodley gave extra medical supplies to a girl who dressed up as an emergency medical technician for Halloween.

Touchpoints like these help shatter preconceived ideas of what constitutes a “man’s job” versus a “woman’s job,” the first responders noted.

As each generation progresses, the women hope the barriers society has constructed around careers topple and young girls will not hesitate to pursue aspirations of becoming first responders.